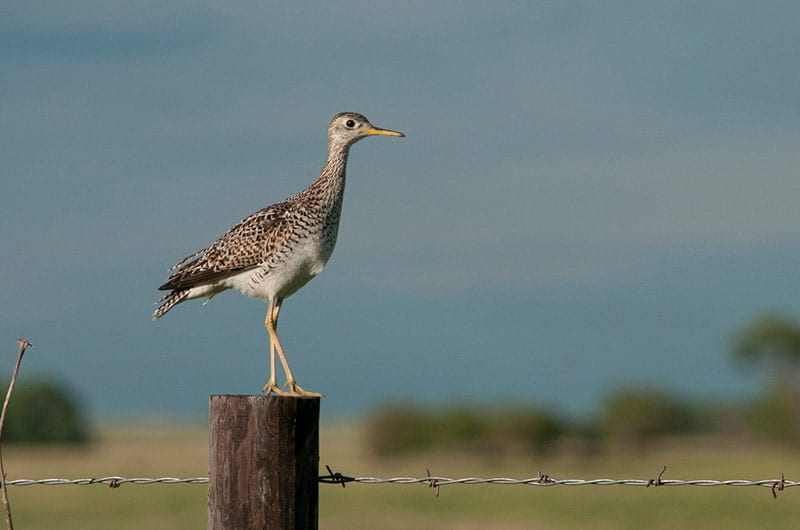 Unlike most shorebirds, the Upland sandpiper is completely terrestrial, rarely associated with coastal or wetland habitats, an obligate grassland species. As a result, it is often recognized as an indicator of prairie health.

These birds are about 12 in/30 cm from the tip of the beak to the end of the tail. Both male and females have a cryptic plumage, providing effective camouflage in grassland habitats throughout the year. Upper parts are generally dull olive to brown-buff, strongly patterned with dark brown and pale brown-buff. Underparts are whitish to dull yellow or pale-buff colored on head, neck, breast and flank, with strongly patterned and streaked, dark brown chevron barring on upper breast and sides. In flight, dark outer wing contrasts with paler inner wing coverts.

Upland sandpipers can be seen on their breeding grounds in the central and northern Great Plains from May-August. In contrast, they may spend up to 8 months on their wintering grounds in South America. While breeding, upland sandpipers blend into their grassland background. While hard to see, their characteristic “long mellow whistle” can often be heard. It starts with a sound similar to gurgling water from a large bottle, followed by a long and drawn-out whistle. This call is given by both sexes prior to nesting season when the birds are landing or circling high in the air.

Unlike most shorebirds, the Upland sandpiper is completely terrestrial, rarely associated with coastal or wetland habitats, an obligate grassland species. As a result, it is often recognized as an indicator of prairie health.

In general, the upland sandpiper requires 3 different habitats within close proximity: while attracting mates, it needs perches and low vegetation for visibility; during nesting, taller vegetation to hide its nest on the ground; and during rearing of young, shorter vegetation. Upland sandpipers can be found near wet meadows and other areas with tall grasses, up to 24 in/61 cm, although they sometimes nest in grass as short as 4 in/10 cm. Their typical nesting habitat is the tall, dense vegetation found in mixed-grass and tallgrass prairies, with up to 50% forbs, few shrubs, and little bare ground. They also nest in wet meadows and hayfields, and sometimes in weedy fallow fields, roadsides, Conservation Reserve Program lands, and row crops. Litter cover is usually moderate to dense and 1.5-3.5 in/4-9 cm deep. Their nesting territory usually includes rock piles, stumps or fence posts for displaying. They prefer short vegetation (up to 10 in/25 cm) for foraging, and may use grazed pastures, plowed fields, stubble and croplands. Brood-rearing areas contain vegetation 4-8 in/10-20 cm tall. 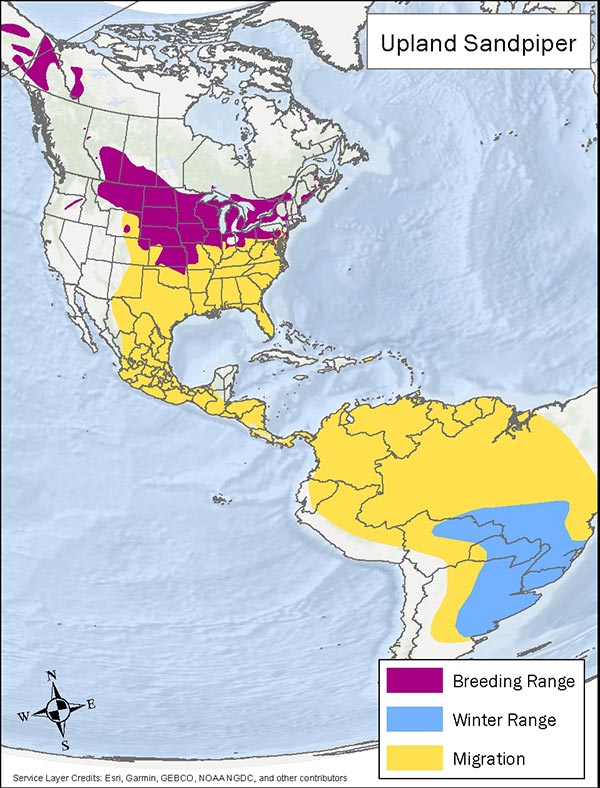 Maintain large (>247 ac/100 ha) blocks of grassland that includes a mosaic of different grass and forb heights to provide habitat for foraging, nesting and brood-rearing. Maintain areas with taller grasses especially around water. Provide display perches (i.e., fence posts, rock pile). Leave small pockets of uncut hay as refuges for young birds (if hayfields need to be cut before late July). If large stock tanks are used for livestock, wildlife escape ladders in the tanks can provide an escape route for birds and other wildlife that become trapped in the water while trying to drink.

Avoid heavy grazing in areas known or suspected to be used for nesting sites, which removes the taller grasses preferred by upland sandpipers for nesting. Delay mowing or pesticide applications until late July, to allow the birds to complete their nesting cycle. Use a flush bar or similar device if mowing or haying is needed earlier than mid-July.

BirdLife International and Handbook of the Birds of the World. 2019., Bird species distribution maps of the world. Version 2019.1. Upland sandpiper

The Cornell Lab of Ornithology, Birds of the World (Upland sandpiper).

The Cornell Lab of Ornithology, All About Birds (Upland sandpiper).