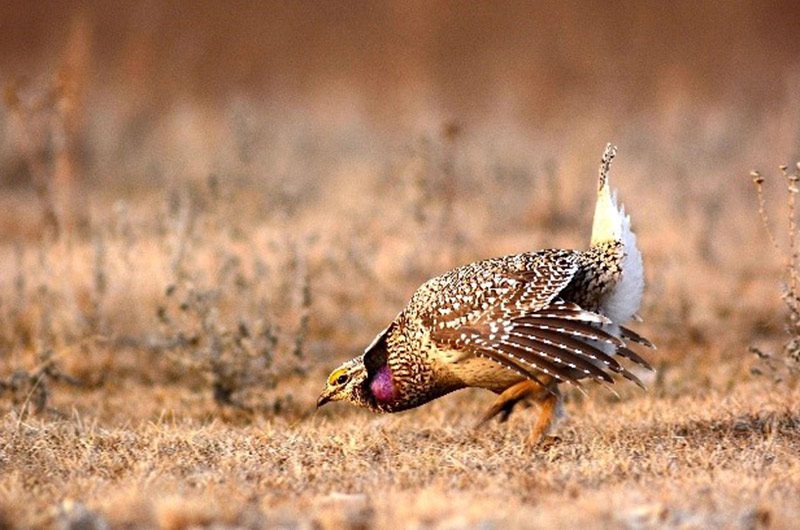 Sharp-tailed grouse were an important source of food for Native Americans, and elements of the birds’ spring breeding display have been incorporated into the traditional dances of some Native American tribes. Some dances, such as the Grouse Dance of the Northern Tutchone people, is still practiced to this day.

The sharp-tailed grouse is a medium-sized gamebird and is similar in size and shape to a greater prairie-chicken. The head, neck, back, and wings are heavily barred in dark brown and buff colors, while breast feathers are white and the belly has small, brown V-shaped marks. Both sexes have feathered legs and a yellow-orange comb over each eye, but only males have the purplish air sacs on the throat. Compared to a prairie-chicken, the sharp-tail grouse has longer, pointed tail feathers.

There are six living subspecies of sharp-tailed grouse. The northern subspecies (northern, northwestern, Alaskan, and prairie) are generally dark brown or blackish, with prominent white spotting, and are found throughout Canada and Alaska. The southern subspecies (Columbian and plains) are paler brown with black mottling and less prominent white spotting, and are found in the Northern Great Plains and pockets of sagebrush throughout the Rockies.

Sharp-tailed grouse are most easily observed in the spring when males gather on traditional breeding sites (known as leks) to display and mate with females. They pop their air sacs, lower their wings, stamp their feet, and fight with other males. This behavior mostly occurs before and just after sunrise in March and April. The birds are year-round residents, but may move short distances in the winter to avoid snow and find woody habitat. They feed mainly on the ground in the daytime, but will forage in trees and shrubs during the winter.

Sharp-tailed grouse were an important source of food for Native Americans, and elements of the birds’ spring breeding display have been incorporated into the traditional dances of some Native American tribes. Some dances, such as the Grouse Dance of the Northern Tutchone people, is still practiced to this day.

Sharp-tailed grouse may also use croplands and Conservation Reserve Program (CRP) fields in fall and winter when other foods are scarce, and may relocate to sheltered and wooded habitats (deciduous hardwood draws, riparian areas, mountain shrub communities, open woodlands, or windbreaks) in the winter. Important tree species used in the winter include aspen, willow, and birch. Springtime breeding grounds (leks) are usually located in open, elevated areas with less vegetation than surrounding areas. 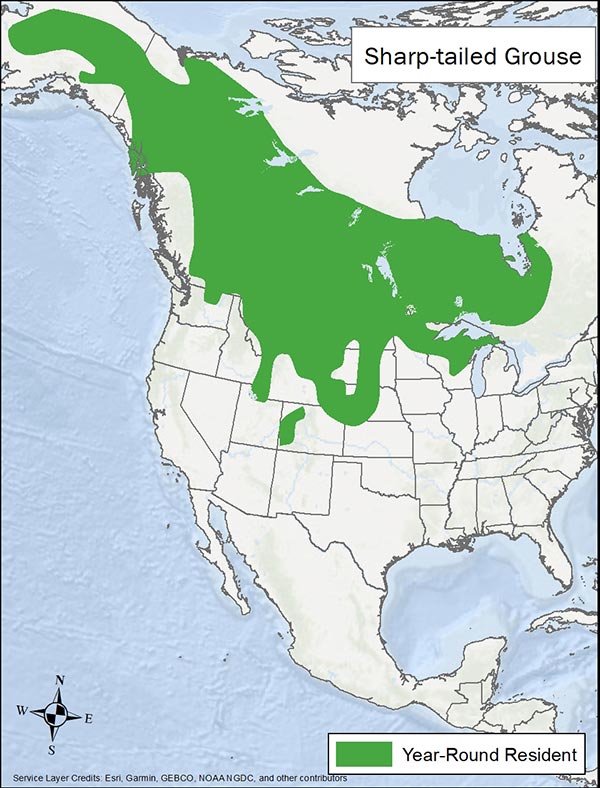 To promote sharp-tailed grouse habitat, conserve large blocks of unfragmented, native grasslands. Maintain a patchwork of pastures containing short and taller grass with abundant forbs and scattered shrubs for habitats used throughout the year. This mosaic can be produced by light to moderate grazing or burning at intervals of 3-4 years or longer intervals in the south-central part of the range. Burns should be conducted outside the nesting and brood-rearing period (April-July). Reseed with native grasses, forbs, and shrubs following fire. Control non-native plants, including annual brome, leafy spurge, and knapweed, which replace the native grasses and forbs favored by sharp-tailed grouse.

If retiring cropland, consider enrolling it into programs, such as Conservation Reserve Program. Ensure grazing plans result in a diversity of vegetation height and structure, including residual vegetation, and allow for growth of key species. Rest a grazing unit every 3-4 years, and ensure units are grazed different times during the growing season each year.

Avoid large fires (>20% of an area) and fires following a drought period. Avoid or minimize sheep grazing in shortgrass habitat as sheep graze an area more completely and to a shorter height; their habit of traveling in tight herds may also result in nest destruction. Avoid grazing riparian areas and mountain shrub patches during late summer, fall, and winter to avoid excessive use of desirable shrubs. Avoid continuous, season-long grazing if possible. Minimize extensive agriculture development that replaces native grassland. Avoid disturbance at leks during the breeding season (March-July) and within a 1.25-mi/2-km radius of a lek. Chemicals that control weeds, insects, and other pests can destroy plant and insect food sources for sharp-tailed grouse, so consider limiting chemical applications, especially in brood-rearing areas.

Other species that may benefit from habitat management for sharp-tailed grouse are greater prairie-chickens, Swainson’s hawk, lark bunting, and western meadowlark.

BirdLife International and Handbook of the Birds of the World. 2019. Bird species distribution maps of the world. Version 2019.1. Sharp-tailed grouse.

Birds of the World, Birds of North America (Sharp-tailed Grouse).