In spring, males attract females by stamping their feet rapidly and making booming sounds with their air sacs. They often leap into the air with loud cackles.

Greater prairie-chickens are most easily observed in the spring when males gather on traditional breeding sites (also known as leks) to display and mate with females. Each male defends a small territory on the lek. They raise their ear pinnae (long neck feathers) and tails, pop their air sacs, and lower their wings. They attack other males in the air with wings, feet, and/or beaks. Females will also chase one another on leks. This lekking behavior mostly occurs before and just after sunrise in March and April. Most populations are considered non-migratory; a portion of the population remains resident on the same area throughout the year while others may move 0.6-106 mi/0.9-170 km between wintering and breeding areas.

In spring, males attract females by stamping their feet rapidly and making booming sounds with their air sacs. They often leap into the air with loud cackles. Some booming grounds, or leks, have been used for more than a century and are considered “ancestral” compared to more recently established “satellite” areas.

Greater prairie-chickens use extensive tallgrass and mixed-grass prairies that may be interspersed with small areas of cropland. Near a lek, a third of the grasslands should provide nesting and brood rearing cover with vegetation height of >10 in/64 cm.  Tall vegetation hides the nests on the ground, providing food and cover year-round. Greater prairie-chicken populations require cover for breeding, nesting, and brood-rearing within 5 mi/8 km of a lek, and span >1,280 ac/518 ha. Continuous tracts of grassland and sandsage prairie are best, but the size requirement can be met with much smaller blocks. Leks are in open, highly visible areas with short vegetation. Ideal nesting cover is grasses of medium height, 8-16 in/20-40 cm, and density such as bluestem, switchgrass, and Indiangrass. Ideal brood-rearing cover allows for shade and concealment from predators. Winter cover must shelter the birds from snow and provide roosting habitat. Sedges and grasses over 20 in/50 cm tall accumulate snow for burrowing. Greater prairie-chickens eat the fruits, seeds, flowers, shoots, and leaves of grasses, sedges, rushes, forbs, and some shrubs. In the summer, insects are a significant food source, especially for chicks. 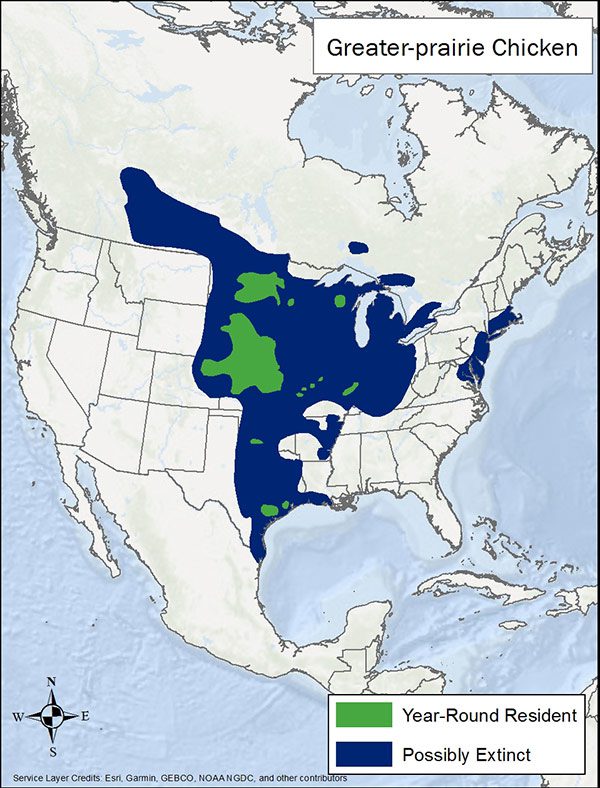 Maintain areas of tall grasses and forbs by implementing rotational grazing or prescribed burning. In areas where landowners farm, crop residue management techniques, such as reduced or conservation tilling, can leave crop waste on the soil surface as winter food sources for the greater prairie-chicken. To increase available cover, land managers could reseed native grasses such as bluestem, switchgrass, Indiangrass, and native forbs.

Mowing should be delayed until August to protect ground-nesting birds near known leks. Patch burning can also open up grassland for brood rearing. Predation can be minimized by maintaining adequate nesting cover.

Avoid large-scale burning. In grazing systems that use cross fencing add fence markers to provide visibility for prairie-chickens and prevent fence collisions. Ring-necked pheasants frequently lay their eggs in prairie-chicken nests, “tricking” them into raising pheasant chicks rather than their own. Hunting of ring-necked pheasant can minimize the impact on prairie-chickens. Land managers should limit pesticide applications to amount necessary for control and utilize effective integrated pest-management measures.

Other species that may benefit from habitat management for greater prairie-chickens are sharp-tailed grouse, grasshopper sparrow, and bobolink.

BirdLife International and Handbook of the Birds of the World. 2019., Bird species distribution maps of the world.  Version 2019.1. Greater prairie-chicken

The Cornell Lab of Ornithology, Birds of the World (Greater prairie-chicken)