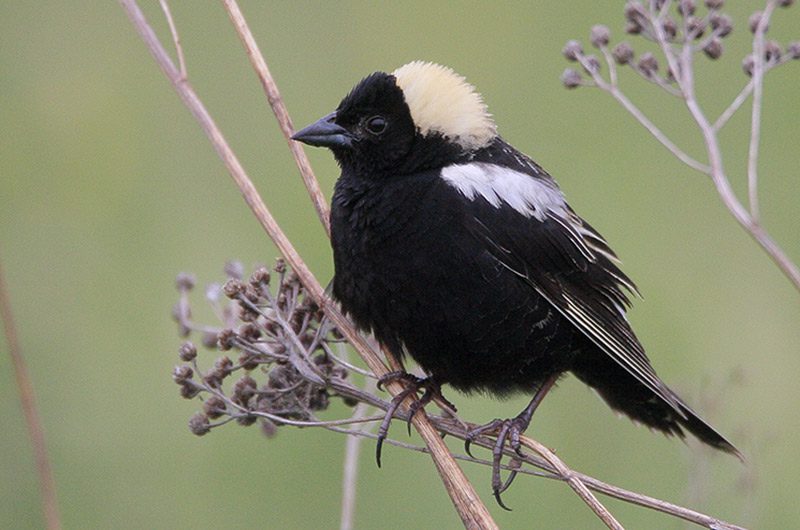 The species name of the bobolink, oryzivorus means “rice eating” and refers to this bird’s appetite for rice and other grains, especially during migration and in winter. One of the most impressive songbird migrants, traveling some 12,500 mi/20,000 km to and from southern South America every year. A migrating bobolink can orient itself with the earth’s magnetic field, thanks to iron oxide in bristles of its nasal cavity and in tissues around the olfactory bulb and nerve. Bobolinks also use the starry night sky to guide their travels.

Bobolinks are the size of a house sparrow, approximately 6.3–7.1 in/16–18 cm from the tip of the beak to the end of the tail. Perched on a grass stem or displaying in flight over a field, breeding male bobolinks are striking. No other North American bird has a white back and black underparts (some have described this look as wearing a tuxedo backwards). Added to this is the male’s rich, straw-colored patch on the head and his bubbling, virtuosic song. As summer ends, he molts into a buff and brown female-like plumage.

Birds arrive in the breeding grounds throughout the Great Plains and across North America in April and begin to migrate south in August and September. Males give their display flights during spring and early summer. In grassy or overgrown hay meadows and pastures, listen for a long, burbling song punctuated with sharp metallic notes. The male bobolink often sings this song while flying in a peculiar helicopter-like pattern, moving slowly with his wings fluttering rapidly. Outside of the breeding season, look for bobolinks in rice fields and listen for their sharp pink call notes.

The species name of the bobolink, oryzivorus, means “rice eating” and refers to this bird’s appetite for rice and other grains, especially during migration and in winter. One of the most impressive songbird migrants, traveling some 12,500 mi/20,000 km to and from southern South America every year. A migrating bobolink can orient itself with the earth’s magnetic field, thanks to iron oxide in bristles of its nasal cavity and in tissues around the olfactory bulb and nerve. Bobolinks also use the starry night sky to guide their travels.

Bobolinks prefer habitat with moderate to tall dense vegetation, >90% herbaceous cover, and moderately deep litter, and without the presence of woody vegetation (<5% for shrubs and trees). They are more abundant in interior grasslands (220 yd/200 m away from an edge), and in lowland habitat. Bobolinks are found in native and cultivated grasslands, hay meadows, lightly to moderately grazed pastures, no-till cropland, small-grain fields, old fields, wet meadows, and planted cover (e.g., US Conservation Reserve Program (CRP) fields, or other plantings taller than blue grama and buffalo grass). They avoid recently mowed hayfields for nesting. 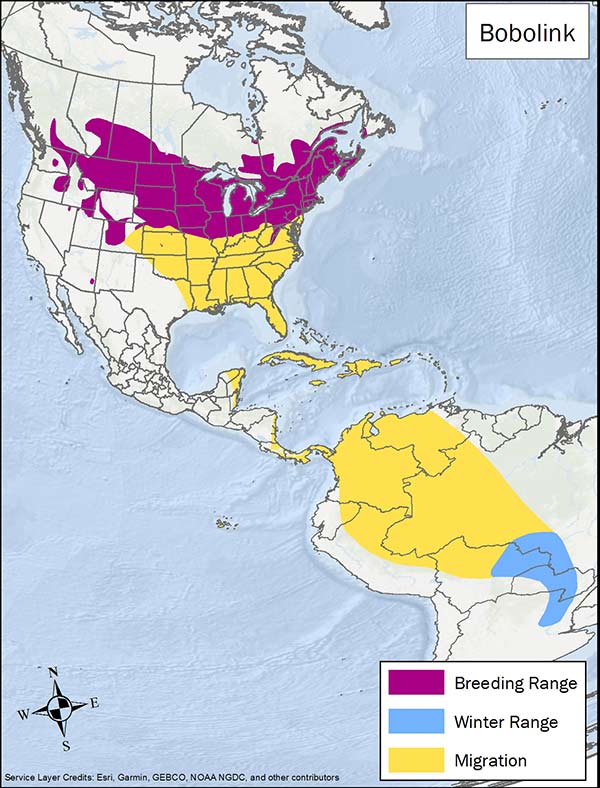 Bobolinks respond positively to properly timed burning (every 3 years) or mowing treatments, after the breeding season (April-July). Promote connectivity by maintaining large patches of intact grassland or hay meadows. The US Conservation Reserve Program (CRP) can increase large patches of grassland for bobolinks. In some areas, bobolinks occur more frequently in native grasslands than pastures.

If feasible, implement alternately mowing some fields in certain years while leaving others idle. This can create a heterogenous, more diverse landscape. Divide large fields in half, with each half being mowed in alternate years, thus ensuring productivity of hay and of birds. If not feasible, consider delaying mowing in half the area until mid-July. Incentives can assist producers if they delay mowing such as The Bobolink Project. Local US NRCS offices may also have options. Activities should prevent or discourage the encroachment of woody vegetation.

Where possible, avoid mowing during the peak of the nesting season April-July 15 if possible, by which time at least 70% of nestlings will have fledged. Use a flush bar or similar device if mowing occurs earlier than mid-July. Minimize woody edges whenever possible to increase bobolink densities. Avoid heavy grazing of short grasses until July on bobolink breeding grounds, if possible. Heavy grazing removes grass and forb cover needed by prey, especially grasshoppers, and taller vegetation needed to shade nests.

Other species that may benefit from habitat management for bobolink include, western and eastern meadowlark, lark bunting, and grasshopper sparrow.

BirdLife International and Handbook of the Birds of the World. 2019. Bird species distribution maps of the world. Version 2019.1. Bobolink

The Cornell Lab of Ornithology, All About Birds (Bobolink)