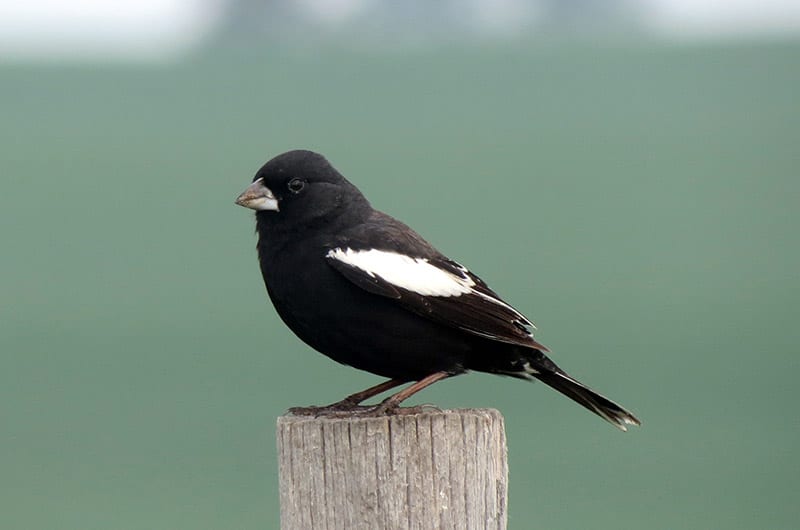 Lark bunting use two different songs in the breeding season: a primary song given from a perch or in flight and an aggressive song always given in flight.

Lark bunting birds are the size of a house sparrow, approximately 6.5 in/16.5 cm from the tip of the beak to the end of the tail. In summer, the males are black with bold white wing patches, while the females are mostly brown, with white wing patches, dark brown streaks on a white breast and cream-colored corners on the tail. Nonbreeding males are dark brown and streaky with the white patch on their shoulders.

Birds arrive in the breeding grounds throughout the Great Plains in April and begin to migrate south in August and September. Males fly up above their breeding territory, then slowly glide down while singing an exuberant song of whistles and trills. During fall migration (late September), large flocks, sometimes hundreds, of lark buntings are often seen along roadsides.

Lark bunting use two different songs in the breeding season: a primary song given from a perch or in flight and an aggressive song always given in flight. The primary song may be complex but will be sung consistently by a given male, whereas the aggressive flight song will often be sung by multiple males without consistency in notes.

Lark buntings’ nest on the ground in open grasslands with a mixture of short and tall grasses and scattered shrubs, and in sagebrush shrublands with grassy openings. They prefer to nest in areas with 60–70% low grass cover, 10–15% bare ground, and 10–30% cover of shrubs, tall grasses, or other plants taller than the blue grama and buffalo grass.  Tall vegetation is necessary for protecting nests from the hot prairie sun. Lark buntings will not nest in areas with <30% grass cover or >60% bare ground. Other nest sites include fallow fields with weeds and residual stubble, Conservation Reserve Program (CRP) lands with tall grasses, and unmowed alfalfa and other hayfields.  They avoid mowed hayfields for nesting. 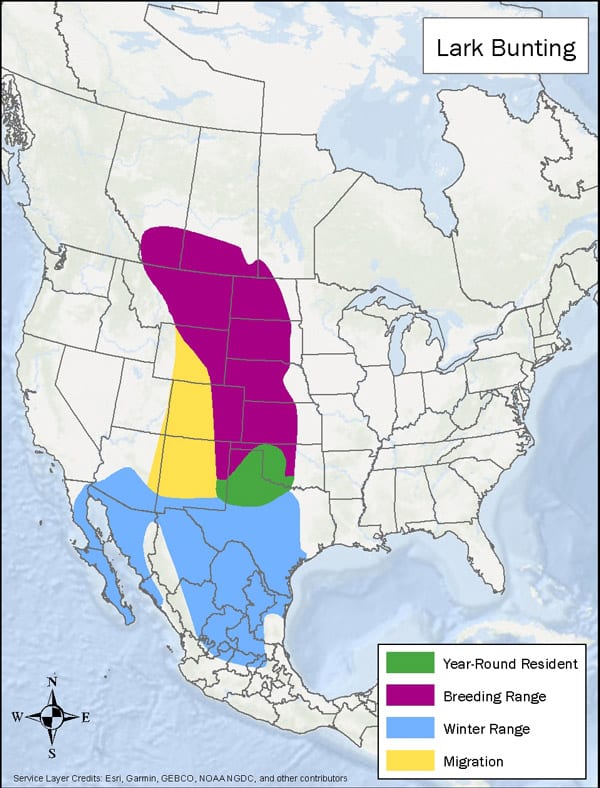 Maintain pastures with moderate to high cover of cool-season perennial grass and forbs, including areas with shrubs and subshrubs. Graze some areas before nesting season at moderate to heavy intensity in the northern and eastern parts of the species’ range where grasses are generally taller >12 in/30 cm to reduce vegetation height. Can graze short grasses lightly in summer or heavily in winter. Retain shrubs, cacti, and other tall vegetation for perching and for shading nests. Special management during wet years is only necessary in terms of how it will affect vegetation composition and structure in future years. During dry years, the extent of suitable habitat is greatly restricted and will likely be better in a pasture that was rested in the previous year. To the extent that dry conditions persist for more than one year, maintaining some areas with tall-structured, lightly grazed mid-grasses will likely benefit nest survival. Management for an abundance of shrubs (e.g., four-wing saltbush and rubber rabbitbrush) will also benefit lark buntings.

Avoid heavy grazing of short grasses on the breeding grounds in May to mid-July in some areas if possible. This removes grass and forb cover needed by prey, especially grasshoppers, and taller vegetation needed to shade nests. Delay mowing until mid-July, when young birds should be out of their nests. Use a flush bar or similar device if mowing occurs earlier than mid-July.

Other species that may benefit from habitat management for lark bunting include swift fox, western meadowlark, grasshopper sparrow, and chestnut-collared longspur.

BirdLife International and Handbook of the Birds of the World. 2019. Bird species distribution maps of the world. Version 2019.1. Lark bunting

The Cornell Lab of Ornithology, Birds of the World (Lark bunting)

The Cornell Lab of Ornithology, All About Birds (Lark bunting)