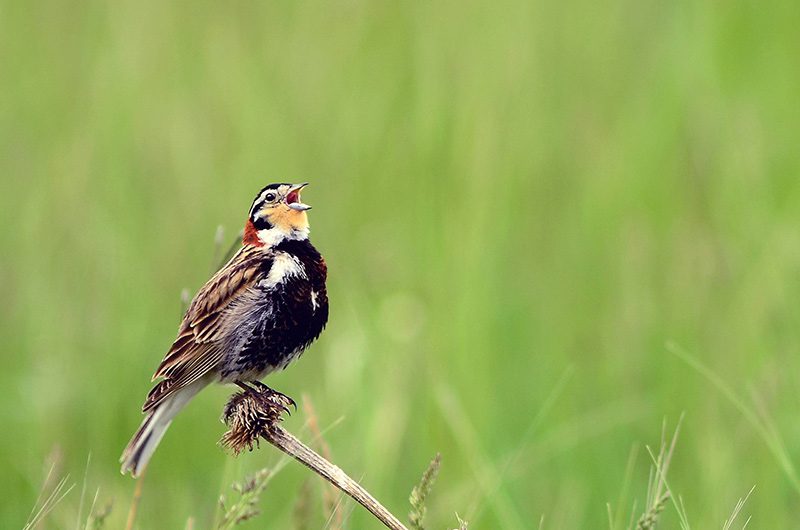 These birds derive their name from their coloring and the elongated claw of the backward-facing toe, the “longspur”. Unlike many songbirds that live in forests, chestnut-collared longspurs and other grassland birds do not hop on the ground, but walk or run.

Chestnut-collared longspurs are 4.5-6 in/11-15 cm long. They are one of the most colorful birds in the shortgrass prairie—males have a black belly, yellowish throat, and rusty nape. Females and nonbreeding birds are less showy, mostly pale grayish-brown above with blurry streaks on the breast. The tail is distinctive in all birds—mostly white with a black triangle in the center.

In the spring, males fly upward in an aerial display, spreading their tails and singing on the way down. Males will also perch up on a fence post or shrub to sing a sweet warble, similar-sounding to a western meadowlark. Chestnut-collared longspurs walk or run on the ground and bob their heads while feeding. Males sing on exposed perches such as barbed-wire fences during spring and summer.

These birds derive their name from their coloring and the elongated claw of the backward-facing toe, the “longspur”. Unlike many songbirds that live in forests, chestnut-collared longspurs and other grassland birds do not hop on the ground, but walk or run.

Chestnut-collared longspurs prefer shortgrass or grazed mixed-grass prairie with some bare ground and clubmoss, and few to no shrubs (<1%). In dry areas with sparse vegetation, they seek out wet meadows and other low, moist areas where the vegetation is taller and denser. They prefer a mix of short and tall grasses, especially bunchgrasses, and usually avoid the tall, dense cover common to some Conservation Reserve Program (CRP) lands.

They will nest in mowed hayfields and grazed pastures, provided the vegetation is 8–12 in/20-30 cm tall, but they generally avoid nesting in cultivated fields. They prefer native pasture over planted grasses or hayfields, and they avoid areas with dense litter (~ 15% bare ground). A breeding territory is usually centered on a large rock, fencepost, or shrub, which is used as a singing perch. Some research has shown they nest most successfully in grassland patches >140 ac/56 ha in size. 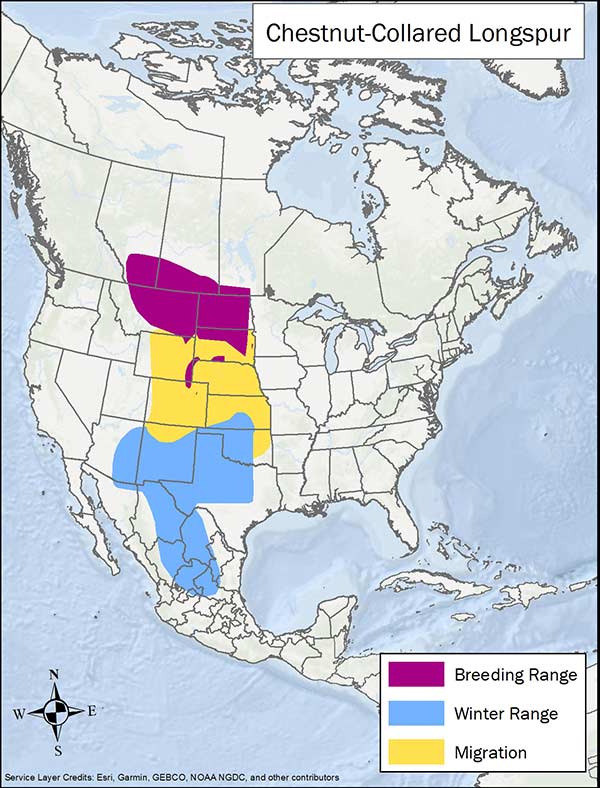 Because chestnut-collared longspurs breed in a region historically disturbed by fire and large herbivores, the birds generally prefer areas disturbed by grazing, burning, and mowing as it maintains the preferred vegetation height and diversity. Allow moderate levels of grazing in mixedgrass prairie, leaving some areas of vegetation at least 6 in/15 cm tall. Use a twice-over rotation system, which creates a more suitable habitat than either season-long or short-duration grazing. Avoid overgrazing in the shortgrass prairie, especially in areas of low precipitation.

Mowing can improve habitat for chestnut-collared longspurs in moist, mixedgrass areas by decreasing vegetation height and density, although grazed areas are usually preferred to mowed areas. Delay mowing until mid-July when young birds should be out of their nests. Use a flush bar or similar device if you must mow earlier than mid-July. Conduct prescribed burns in late summer or early fall to control shrub density, especially in areas that historically burned and fire has been suppressed, such as mixedgrass prairie

Maintain larger patches of native prairie by minimizing grassland conversion for crops. Avoid seeding fields with taller, exotic grasses like crested wheatgrass. Avoid road and energy development through known areas of nesting longspurs, as the disturbance may cause the birds to leave the area. Avoid pesticides if possible as the chemicals can harm adults and nestlings, and reduce insect food sources.

Other species that may benefit from habitat management for chestnut-collared longspur include greater short-horned lizards, lark buntings, western meadowlarks, and swift foxes.

BirdLife International and Handbook of the Birds of the World. 2019. Bird species distribution maps of the world. Version 2019.1. Chestnut-collared longspur

The Cornell Lab of Ornithology. All About Birds (Chestnut-collared longspur).