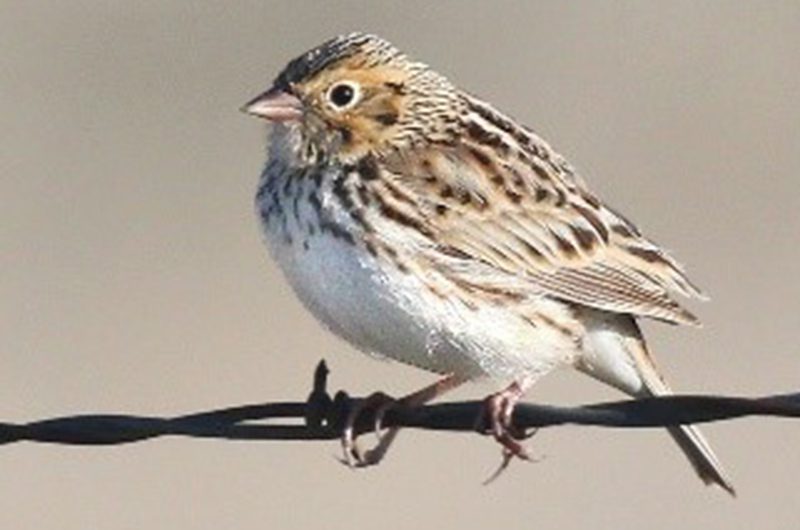 The Baird’s sparrow is about 4-5 in/10-13 cm from beak to tail. The birds are buffy or tan, with blackish streaking on the back and crisp streaking on the white breast. Adults have yellowish tints on the face and broad, central stripes on the crown. They also have flattish heads.

Beginning in early spring, males will perch on a grass stalk or shrub to attract females by singing three short notes followed by a tinkling trill. Baird’s sparrows often feed on the ground and will run along the ground rather than fly to avoid being seen. In the breeding season, Baird’s sparrows are found in the Northern Great Plains, but in the winter, they occupy Chihuahuan grasslands in northern Mexico.

Baird’s sparrows are found in open mixedgrass prairie with abundant medium-to-tall grasses, as well as high, patchy forb coverage, and moderate amounts of litter. They generally avoid nesting in areas of shortgrass (<4 in/10 cm), such as recently heavily grazed rangeland, pastures, and cropland. They also tend to avoid nesting in sites with high shrub cover (>20%) and woody vegetation, although Baird’s sparrows will use available shrubs as singing perches.

Breeding pairs tend to establish territories in areas dominated by native mixedgrass vegetation but can also be found in dense stands of grass within seeded pastures and hay meadows. Research shows that nesting success is higher in large grassland patches of at least 155 acres/63 ha. 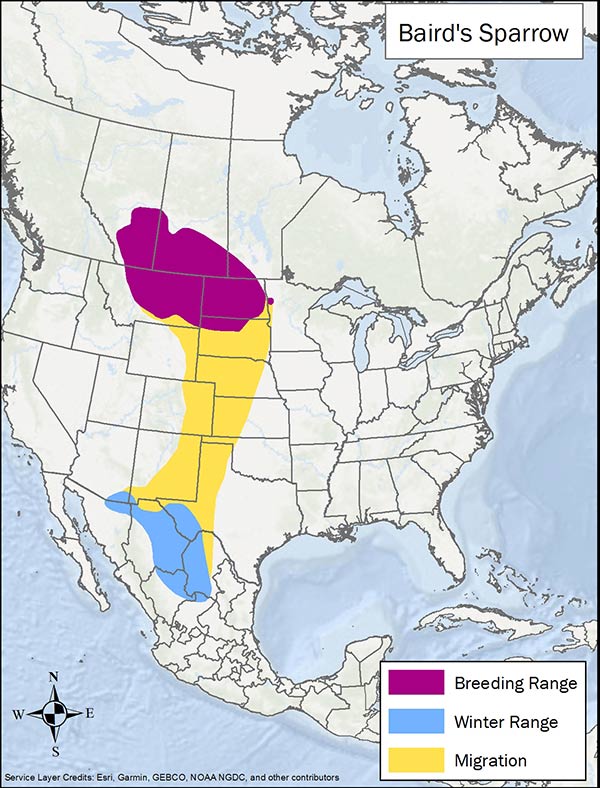 To promote Baird’s sparrow habitat, conserve large tracts of native grasslands, and maintain high vegetative diversity. Graze lightly or for short duration during the breeding season. Graze native pastures in fall or winter, and graze cultivated pastures in winter or spring. Delay mowing until early-August to allow the birds to complete their nesting cycle, and use a flush bar or similar device if you mow before mid-August. Rejuvenate dense grasses by burning every 8-10 years or longer if needed to allow litter to accumulate between burns.

Retain fairly dense residual cover, which Baird’s sparrows prefer for nesting. Control invasive plants and prevent encroachment of woody vegetation by burning or mechanical removal. Control rather than eradicate populations of insects (e.g., grasshoppers) at levels that are compatible with economic activities. Baird’s sparrow may benefit from programs that convert cropland to perennial vegetation, which will provide additional habitat.

Avoid conversion of native prairie to cropland or non-native grass monocultures such as smooth brome, and loss or fragmentation of large grassland patches. As Baird’s sparrows are sensitive to disturbances on their breeding grounds and can sometimes abandon nests, avoid mowing and heavy or continuous grazing in late spring and early summer, especially where grass cover is already short and sparse.

Other species that may benefit from habitat management for Baird’s sparrows include upland sandpipers, Sprague’s pipits, grasshopper sparrows, chestnut-collared longspurs, and western meadowlarks.

BirdLife International and Handbook of the Birds of the World. 2019. Bird species distribution maps of the world. Version 2019.1. Baird’s sparrow.

The Cornell Lab of Ornithology, Birds of the World, Baird’s sparrow