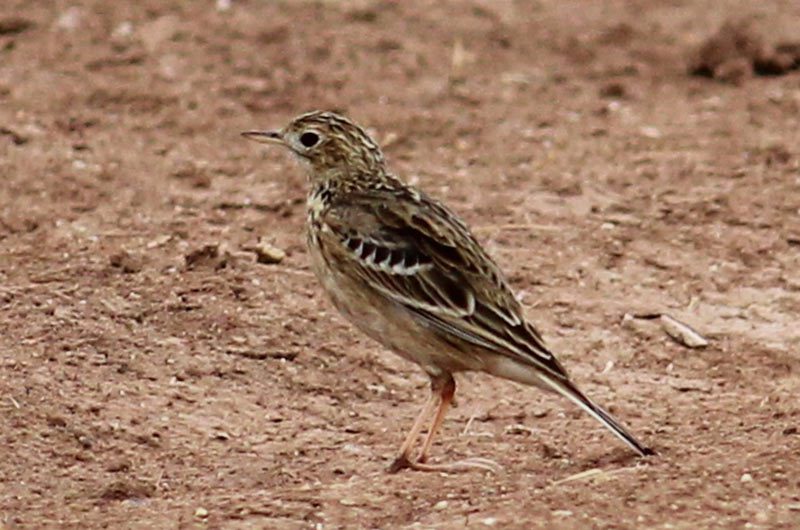 When males are displaying during the breeding season to attract a mate, they often remain airborne for half an hour. In one case, a male Sprague’s pipit was observed displaying for 3 hours before descending to the ground! No other bird is known to perform such prolonged displays.

The Sprague‘s pipit is a little brown songbird about 4–7 in/10-17 cm long with dark streaking on back and crown. They have two pale indistinct wing-bars, streaked pale breast, white belly and pink-orange or pinkish-brown legs. They have a pale eye-ring and white outer tail feathers that are noticeable in flight. The male emits a distinctive high-pitched song that sounds like ringing bells while circling high overhead.

The Sprague’s pipit is found only in the northern Great Plains of Montana, North Dakota, and southern Provinces of Canada. The bulk of the population migrates in spring through the central Great Plains, primarily in April, arriving on breeding grounds late April–mid-May. In fall they migrate through the central Great Plains from late September— early November.  They winter in Texas and Mexico. While they are a fairly unassuming bird with plain buffy plumage, Sprague’s pipit possesses an amazing song in flight, hovering on rapidly fluttering wings high above its territory, singing a downward-swirling song during bursts of gliding. When not singing, this species is very difficult to find, often not seen until it flushes from nearly underfoot.

When males are displaying during the breeding season to attract a mate, they often remain airborne for half an hour. In one case, a male Sprague’s pipit was observed displaying for 3 hours before descending to the ground! No other bird is known to perform such prolonged displays.

Sprague’s pipits require areas of native mixedgrass prairie vegetation, low visual obstruction (<10in/27 cm high), little to no shrubs or forbs (<5%), and with little bare ground (<10%), and low litter depth. They are rarely found in pastures with introduced species or crops and tend to avoid areas with intense or heavy grazing. They prefer grasslands greater than 470 ac/190 ha in size. 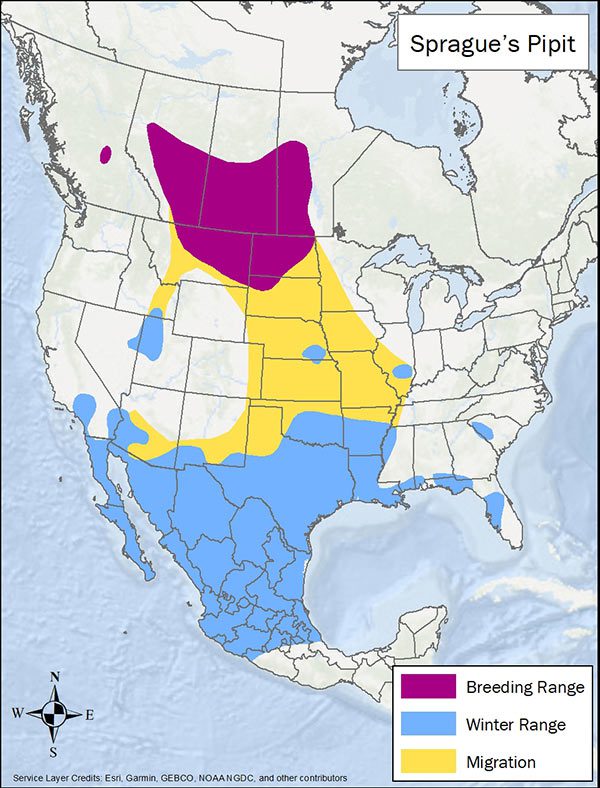 Avoid habitat conversion and fragmentation of intact prairies. Avoid planting windbreaks (trees) within intact grasslands as they fragment the habitat for grassland birds and attract other predatory wildlife. Woody plantings should be no closer than 300 ft/91 m to patches of grasslands greater than 70 ac/28 ha.

Other wildlife that may benefit from habitat management for Sprague’s pipit include grasshopper sparrow, chestnut-collared longspur and lark bunting.

BirdLife International and Handbook of the Birds of the World. 2019. Bird species distribution maps of the world.  Version 2019.1. Sprague’s pipit.

The Cornell Lab of Ornithology. Birds of the World (Sprague’s pipit).

The Cornell Lab of Ornithology. All About Birds (Sprague’s pipit).