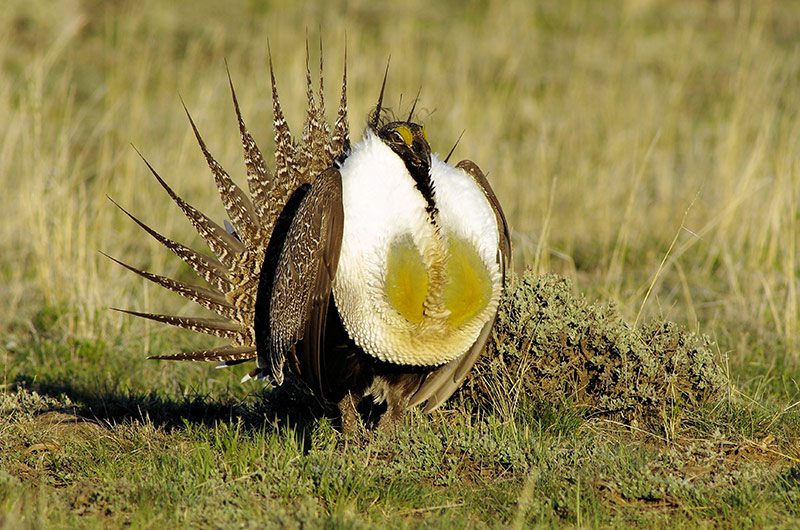 Greater sage-grouse are adapted to eat the leaves of sagebrush shrubs year-round. Sagebrush have a characteristic smell from chemicals called monoturpenoids, which are toxic to most wildlife. Sage-grouse have evolved to eat sagebrush leaves without getting sick.

Greater sage-grouse is the largest grouse in North America—males are the size of a small turkey, 4-7 lb/2-3 kg, and females are about half as large. Adult males are mostly brown with mottling on the back and wings, a pointed tail, long hair-like feathers from the back of the neck, a black belly, white breast, and two yellow air sacs that inflate during the breeding display. Females are more cryptic and lack the conspicuous white breast, air sacs, and hair-like feathers. Sage-grouse are a resident species in western North America, but some will disperse seasonally throughout the year.

Greater sage-grouse have a unique breeding display in the springtime where males gather on leks (i.e., breeding grounds) in the early morning to attract females. Leks are usually located on ridgetops, disturbed sites, and other open areas. Males strut with tails fanned, popping their air sacs, and fights between breeding males are common.

Greater sage-grouse are adapted to eat the leaves of sagebrush shrubs year-round. Sagebrush have a characteristic smell from chemicals called monoturpenoids, which are toxic to most wildlife. Sage-grouse and a few other species (pronghorn, mule deer, elk, and pygmy rabbit) have evolved to eat sagebrush leaves without getting sick. Sage-grouse will also select specific sub-species of sagebrush plants that have higher nutritional content and/or fewer toxins.

Greater sage-grouse use a variety of habitats during the year, including sagebrush shrublands, grasslands, and wet meadows. When lekking, sage-grouse avoid areas where even very low levels of tree cover occur, <4%. Females nest on the ground usually under a tall sagebrush shrub, 11-32 in/28-81 cm, in an area with >15% sagebrush canopy cover. Grass and forbs must be dense enough to conceal the nest and hen, so nest sites need 3–30% residual grass cover and >15% cover of herbaceous plants (grasses and forbs) that are >7 in/18 cm. After hatching, broods (hens and chicks) move to wet meadows with abundant forbs and insects for food; forb cover should be >15%. Sage-grouse spend their winters in sagebrush shrublands with 10–30% cover and shrubs tall enough to leave branches exposed >10 in/25 cm above the snow. In summer, sage-grouse eat insects and the leaves, buds, and flowers of sagebrush and a variety of forbs. In winter, grouse eat sagebrush leaves almost exclusively. 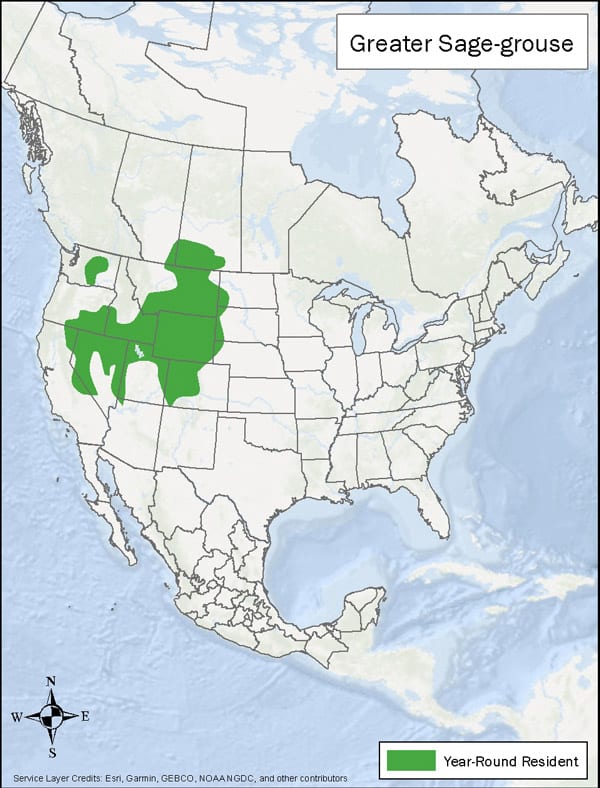 Avoid extensive prescribed fire as it has been shown to lead to grouse population declines, lower occupancy, lek failure and may lead to colonization by cheatgrass. Mechanical treatment to reduce sagebrush cover does not typically benefit sage-grouse. Avoid heavy spraying of herbicide and insecticides as this can cause major declines of sage-grouse populations.  Human activities within 0.3 mi/ 0.5 km from leks should be minimized during the early morning and late evening when birds are near or on leks. During breeding season near leks, avoid early morning truck traffic and energy-related activities to minimize disturbance.  Energy-related infrastructure should be located >2 mi/3.2 km from active leks whenever possible.

Any species that uses sagebrush rangelands during part or all of the year, will likely benefit from habitat practices for greater sage-grouse. Examples of these species include sage thrasher, Brewer’s sparrow, sagebrush sparrow, pygmy rabbit, and mule deer.

BirdLife International and Handbook of the Birds of the World. 2019. Greater sage-grouse. Bird species distribution maps of the world.  Version 2019.1.

The Cornell Lab of Ornithology, Birds of the World (Greater sage-grouse).

Consult with your state wildlife agency about grouse population management.