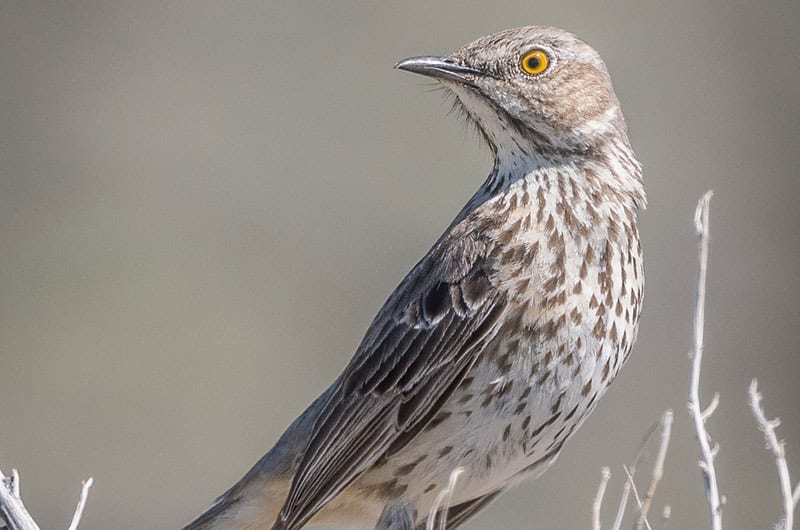 Sage thrashers have a long, melodious flutelike song with a lot of variety in notes. The longest documented song was approximately 22 minutes long! Sage thrashers may also mimic the notes of other birds and have been called “the mockingbird of the sagebrush.”

The sage thrasher is the smallest of all thrashers, 8-9 in/20-23 cm, a little smaller than a robin. It has a small bill, yellow eyes, two thin, white wingbars, and a grayish-brown back with streaking on the breast and belly. Its tail is long with white corners. They maintain their coloration year-round, and males and females look similar.

Sage thrashers can be seen and heard singing from the tops of the tallest shrubs in the springtime as males begin to court females. They are elusive when alarmed and will flick their tail repeatedly in response. They often run on the ground rather than fly. Sage thrashers will also fly in low, undulating circles and flutter their wings upon landing in a courtship display. They arrive on their breeding grounds in March or April.  From their breeding grounds in the Intermountain West, sage thrashers begin their migration in August. They winter in the southwestern U.S. and in northern Mexico.

Sage thrashers have a long, melodious flutelike song with a lot of variety in notes. The longest documented song was approximately 22 minutes long! The sage thrasher may also mimic the notes of other birds and has been called “the mockingbird of the sagebrush.”

In the breeding season, sage thrashers are found in sagebrush shrublands, especially with taller, older stands of big sagebrush and limited grass cover. They nest most commonly in sagebrush shrubs, but will also use greasewood, rabbitbrush, bitterbrush, and juniper shrubs. Nesting shrubs are usually taller, >27 in/69 cm, and more vigorous than surrounding shrubs. During migration and winter, sage thrashers use a wide variety of open, arid habitats, such as grasslands with scattered shrubs and open pinyon-juniper woodlands. They feed on insects from the ground, especially ants, beetles, and grasshoppers. They also occasionally eat seeds and small fruits. 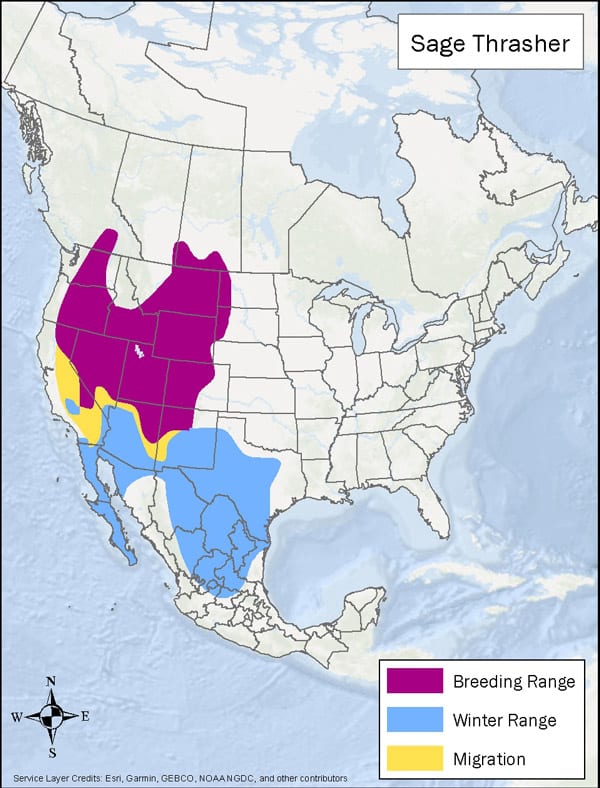 Avoid using extensive prescribed fire as it will eliminate sagebrush and other shrub cover. Additionally, where possible, refrain from other management actions that reduce or eliminate sagebrush canopy cover, such as mechanical sagebrush removal and herbicide application.

Other sagebrush-obligate species will likely benefit from habitat management for sage thrashers, such as Brewer’s sparrows, sagebrush sparrows, greater sage-grouse, and pygmy rabbits.

BirdLife International and Handbook of the Birds of the World. 2019. Bird species distribution maps of the world.  Version 2019.1. Sage thrasher.

The Cornell Lab of Ornithology, Birds of the World (Sage thrasher)

The Cornell Lab of Ornithology, All About Birds (Sage thrasher)