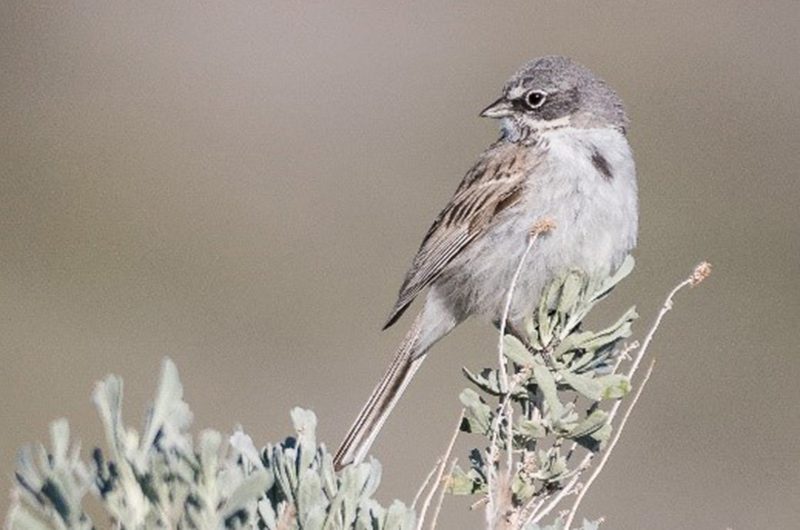 Sagebrush sparrows are a medium-sized sparrow (5-6 in/12-15 cm) with a relatively long tail that is dark with lighter edges. Males and females look similar: a gray, rounded head, a white spot in front of each eye, a white “mustache,” a brown back, and white underparts with a black dot on the breast.

During the breeding season, sagebrush sparrows are commonly found in sagebrush and other shrublands throughout the Great Basin region. Males can be heard singing their cheerful song from the tops of sagebrush and other shrubs. When not singing, look for sagebrush sparrows feeding on the ground or running between shrubs. They spend their winters foraging in small groups in the arid shrublands and grasslands of southwestern U.S. and northern Mexico.

Sagebrush sparrows breed in semi-open shrub-steppe habitat throughout the Great Basin region. In the spring and summer, they are commonly found in big sagebrush shrublands where shrubs are evenly spaced (10-40% shrub cover), and up to 6 ft/2 m tall. They also breed in sagebrush communities. They only rarely breed in sagebrush-juniper communities that are adjacent to sagebrush shrublands. They typically nest low in a shrub, but also occasionally on the ground under a shrub or in a bunchgrass. Shrubs used for nesting are typically taller with a larger canopy than surrounding shrubs, and include big sagebrush, bitterbrush, rabbitbrush, and greasewood. In the winter, sagebrush sparrows may use big sagebrush shrublands, arid shrublands, and grasslands with creosote, saltbush, yucca, mesquite, and greasewood. 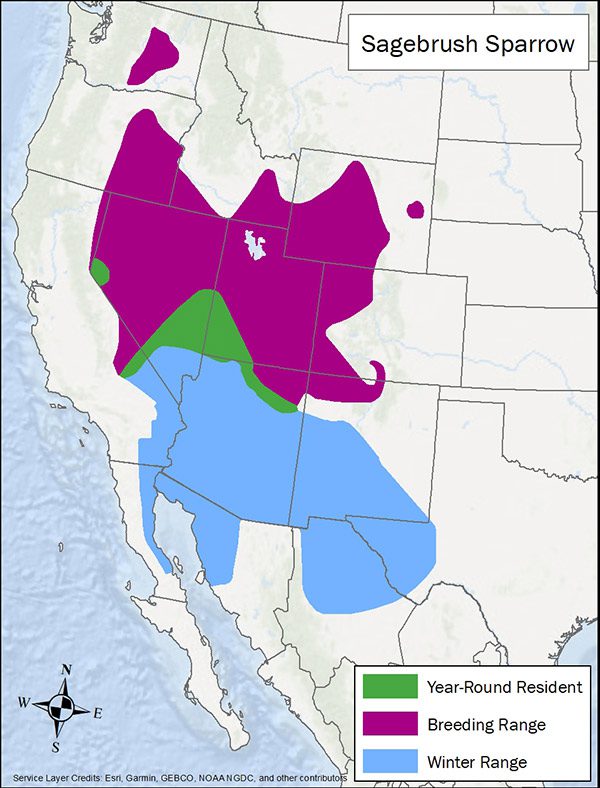 Avoid shrub treatments (e.g., mechanical thinning) in the late spring and early summer to reduce nest disturbance for breeding sagebrush sparrows. Avoid any activity that reduces sagebrush cover has the potential to negatively impact the species, such as prescribed fire, herbicide application, chaining, mowing, and other mechanical shrub removal practices.

Other sagebrush-obligate species will likely benefit from habitat management for sagebrush sparrows, such as sage thrashers, Brewer’s sparrows, greater sage-grouse, and pygmy rabbits.

BirdLife International and Handbook of the Birds of the World. 2019. Bird species distribution maps of the world. Version 2019.1. Sagebrush Sparrow

The Cornell Lab of Ornithology, Birds of the World Sagebrush Sparrow

The Cornell Lab of Ornithology. All About Birds Sagebrush Sparrow