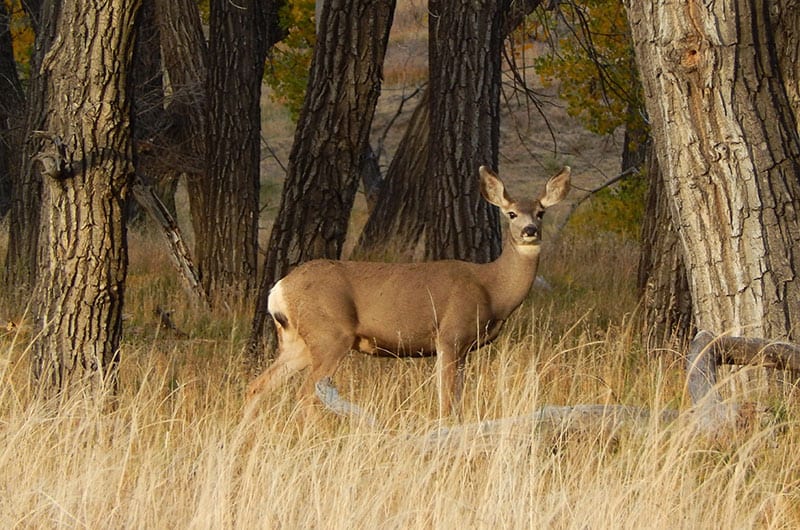 When alarmed, mule deer bound away with four feet hitting the ground together at each bound. This is called “slotting” and is different from white-tailed deer who spring from hind to front feet.

Mule deer are slightly larger than white-tailed deer, standing 5.5 ft/ 1.7 m tall. Males are larger than females and can weigh up to 265 lb/120 kg. The tail is short, narrow, and varies in color within their range. Mule deer were named for their large, mule-like ears that are constantly surveying for signs of danger. Although color is variable, mule deer generally have light colored faces, throats, bellies, inner legs, and rump patches. Mule deer antlers fork as they grow and are usually shed in February or March and regrow over the summer.

Mule deer are best observed during early mornings and dusk as they are most active foraging. Populations in the north migrate up to higher elevation mountains in the summer and down to foothills in the winter to find food and seek cover from harsh weather. Some mule deer populations in riparian corridors, irrigated valleys, and residential areas may remain year-round residents.

When alarmed, mule deer bound away with four feet hitting the ground together at each bound. This is called “slotting” and is different from white-tailed deer who spring from hind to front feet.

Mule deer are distributed throughout western North America occupying a diversity of vegetation, including forest, dense brush or shrubland, open grassland and meadows. Mule deer are primarily browsers, with forbs and browse (leaves and twigs from shrubs and trees) comprising much of their diet. Deer have more specific forage requirements than larger ruminants as they require the most nutritious plants to meet their nutritional needs. Mule deer will consume fruits, flowers, mushrooms, green and succulent forbs and grasses when available Greater than 30% native perennial forbs are ideal. The presence and condition of shrubs, 10-30%, is a key driver in mule deer survival as shrubs are an important resource during dry summer months, droughts and deep snow events. During all seasons, deer prefer habitats that provide a mosaic of plant species, age classes, and successional stages within close proximity to areas of good cover. Malnutrition is often the leading cause of mule deer deaths. Winter habitat, including sagebrush-steppe, pinyon juniper, mountain shrub and ponderosa pine forests below 7,500 ft/2,286m, is often limiting because of residential development and degradation of these areas. Access to high quality winter range for pregnant does has been shown to improve early survival of fawns the following summer and improved nutrition of fawns during winter can increase over-winter survival rates. Private ranch lands often include some of the highest quality deer wintering areas especially in valley bottoms. Livestock and deer commonly share the same ranges. 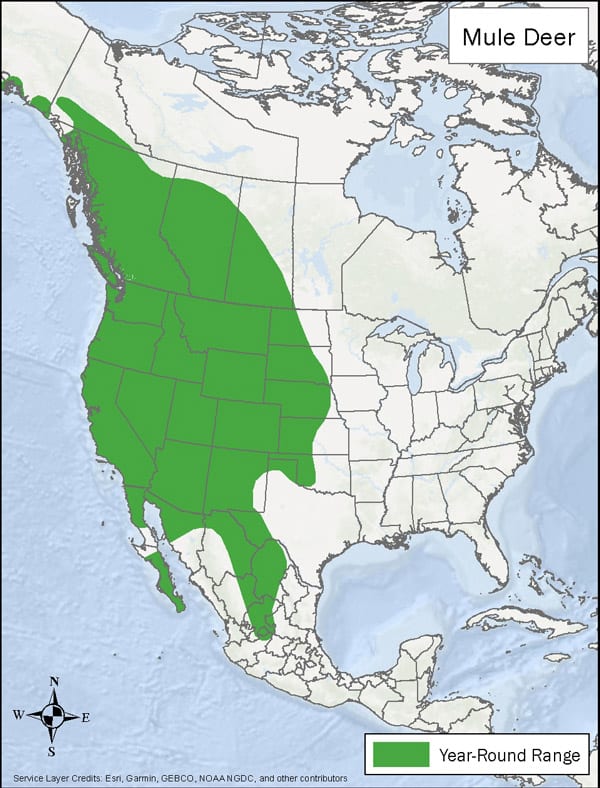 Range map provided by The International Union for Conservation of Nature

Maintain open areas by conducting prescribed burning or rotational/deferred grazing where appropriate. In winter ranges, pinyon-juniper woodlands have expanded resulting in reduced understory diversity and productivity in winter forage for deer. Similarly, at high elevations the absence of fire and other disturbances has resulted in some aspen forests being replaced by spruce-fir with much lower value for deer. Forest thinning, and undergrowth prescribed burns are beneficial to maintain varying age classes. In general, small brush/forest treatments conducted in a mosaic is more beneficial than 1 large treatment. Treatments should be planned in the context of broader landscape goals and with consideration of the needs of other species. Begin treatment in an area of greatest benefit and link subsequent habitat improvements to the core area. Control invasive species such as cheat grass as it can out-complete native plants and increases the likelihood of catastrophic wildfire resulting in the loss of critical shrub communities. During drought conditions, careful grazing planning should include accounting for forage needs of mule deer and other wildlife species to avoid damage to vegetation communities. Where possible, install wildlife friendly fencing that has a smooth bottom wire at least 16 in/41 cm from the ground, (18in/46 cm is better) and the top wire should be no higher than 40 in/101.5 cm.

Management for mule deer is beneficial to other species that rely on high quality shrub communities, aspen forests and grasslands. Wildlife friendly fences are good for deer, elk, pronghorn, black bears and many bird species.