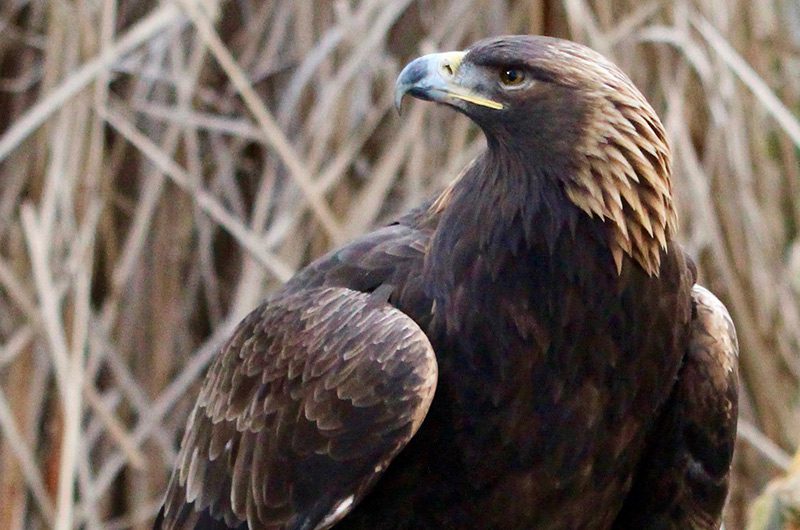 Golden Eagles are one of the largest birds in North America at 27.6-33.1 in/70-84 cm long with an impressive wingspan of 72.8-86.6 in/185-220 cm. The wings are broad like a red-tailed hawk, but longer. At a distance, the head is relatively small and the tail is long, projecting farther behind than the head sticks out in front. They are very similar to bald eagles in both size and color. Juvenile bald eagles resemble golden eagles; however, they often occupy different. Bald eagles or more associated near large bodies of water, while golden eagles are more terrestrial.

Golden eagles are mostly year-round residents throughout the western United States. Northern breeders (in Alaska and Canada) migrate thousands of miles to wintering grounds; southern pairs tend to be resident year-round. Adults begin egg laying by February or March. Departure from northern breeding areas coincides with the first lasting snowfall, freeze-up, north winds, or decreasing prey abundance. Note that juvenile bald eagles also have brown feathers on their head until about age 3 and thus can be mistaken for a golden eagle until their white head and tail feathers begin to emerge.

Golden eagles nest on cliffs and steep escarpments in grassland, chapparal, shrubland, forest, and other vegetated areas but need access to perennial water within 1049 ft/320 m. Ideal habitat tends to have between 10-40% shrub cover providing habitat for prey species. 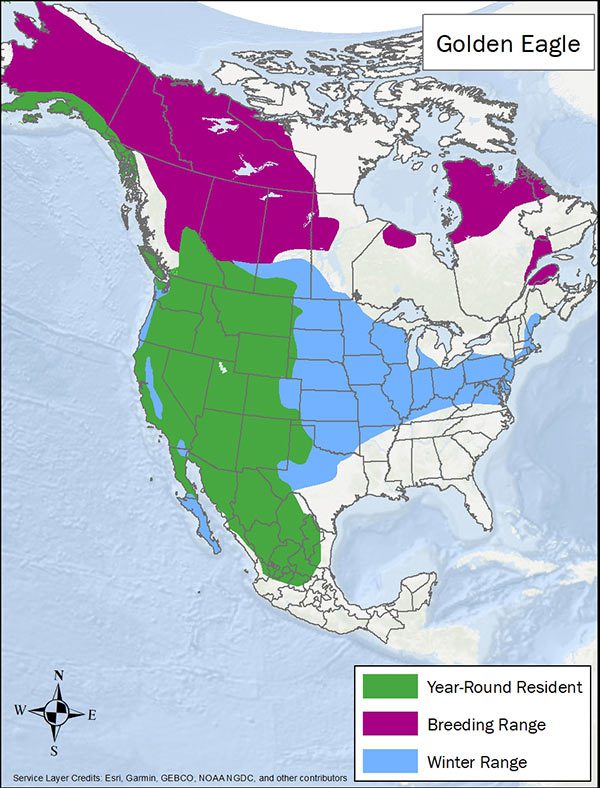 Maintain native habitats as golden eagles occupy a wide range of vegetation types. Leave dead trees (snags) as perches are necessary for eagles to view, hunt and rest. Artificial nest stands will be used by eagles when nesting substrates are not available, so considering allowing wildlife agencies to install these on private lands. Ask local energy companies to retrofit powerlines and poles in areas with known nesting or wintering eagles to prevent electrocution. As eagles are more susceptible to collision with wind turbines than other birds, work with local wildlife agencies and use guidelines for turbine siting if considering wind energy on private lands.

The primary activities to avoid may not be management oriented, but more related to human activities. Avoid hunting mammals with lead bullets, because eagles are susceptible to secondary poisoning from eating dead mammals shot using lead bullets. Similarly avoid poisoning small mammals which can also have a negative secondary consequence on eagles.

Other wildlife that may benefit from habitat management for golden eagles include ferruginous and Swainson’s hawks, pronghorn antelope, black-tailed jackrabbits and mule deer.

BirdLife International and Handbook of the Birds of the World. 2019. Bird species distribution maps of the world.  Version 2019.1. Golden eagle

The Cornell Lab of Ornithology. Birds of the World (Golden eagle).

The Cornell Lab of Ornithology. All About Birds (Golden eagle).