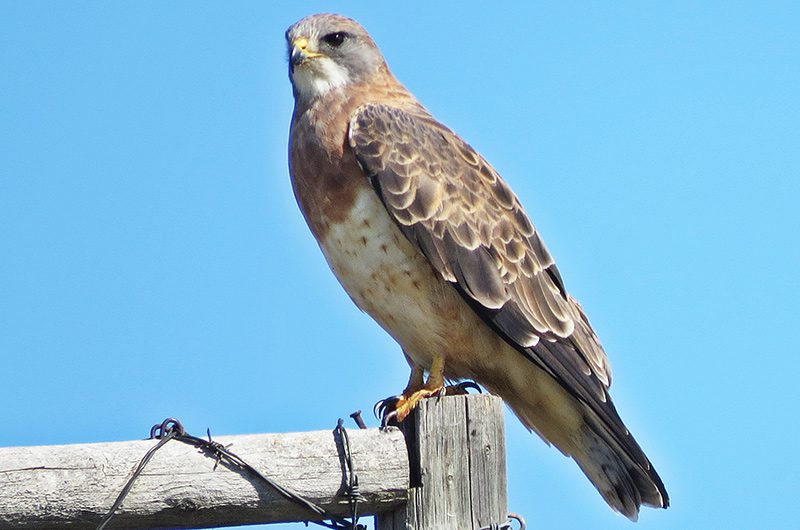 A highly gregarious species, the Swainson’s hawk forages and migrates in flocks sometimes numbering in the thousands. Its movement through Central America has been described as among “the most impressive avian gatherings in North America, since the demise of the Passenger Pigeon”. Nearly 350,000 Swainson’s hawks have been counted passing over a single point in Panama City in October and November, and up to 845,000 have been counted in a single autumn in Veracruz, Mexico.

Swainson’s hawks are a large raptor, slightly smaller than a goose at 18.9-22.1 in/48-56 cm long. They are most noticeable by their reddish bib or chest and white belly, and brown or gray upperparts though they can be quite variable. Swainson’s hawks have distinctive underwings with white wing linings (front edge) that contrast strongly with blackish flight feathers (back and outer edges). Most males have gray heads; females tend to have brown heads. Dark morph individuals also occur which vary from the whole body being reddish to nearly all black.

Swainson’s hawks are found breeding throughout the midwest-western United States and north into western Canada. Nearly the entire breeding population migrates each autumn from North America to wintering areas in southern parts of South America. From prairie Canada, this migration is more than 10,000 km each way. They nest in lone trees in the prairie and closer to riparian areas. Look for ”kettles” in the sky, or a flock of many hawks soaring together. They can save their body energy by moving from thermal to thermal in the sky during their long migration.

A highly gregarious species, the Swainson’s hawk forages and migrates in flocks sometimes numbering in the thousands. Its movement through Central America has been described as among “the most impressive avian gatherings in North America, since the demise of the Passenger Pigeon”. Nearly 350,000 Swainson’s hawks have been counted passing over a single point in Panama City in October and November, and up to 845,000 have been counted in a single autumn in Veracruz, Mexico.

Swainson’s hawk prefers historic and existing native habitat, foraging in open stands of grass-dominated vegetation (>50% herbaceous cover), sparse shrublands (<10% shrub cover), and some small, open woodlands. It has adapted well to agricultural areas (e.g., wheat and alfalfa), but cannot forage in most perennial or annual crops that grow much higher than native grasses, making prey more difficult to find. They nest in lone trees or in clumps of trees, often near a stream or riparian area, and occasionally in artificial nest platforms or on the ground. Height of trees is important for nest success but can vary greatly, 6-40 ft/2-12 m in height. 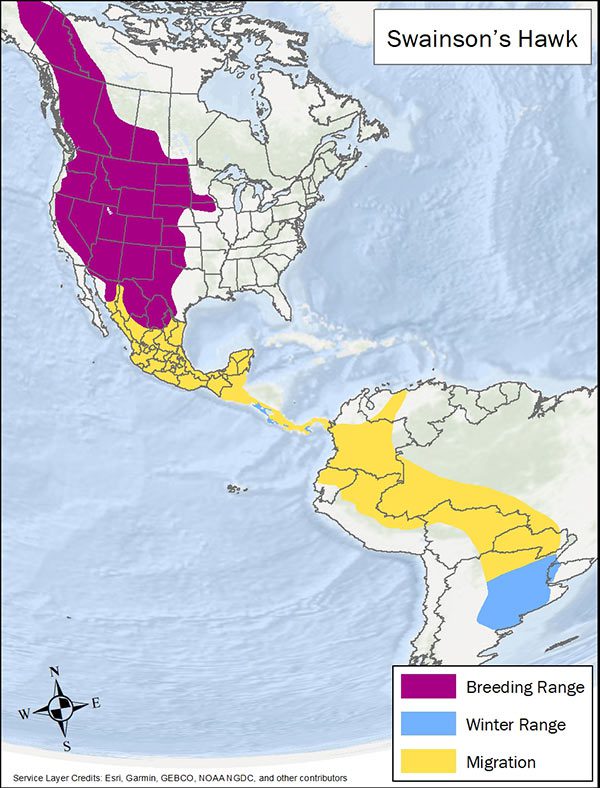 Swainson’s hawks are tolerant of cultivated and other human-induced areas as well as open grassland habitat with a few trees. Leave trees as much as possible, as these hawks will nest in lone trees and windbreaks.  Because windbreaks can deter many grassland songbirds from occupying grassland and fragment their habitat, consider windbreaks only near fences and structures if possible.

Avoid conversion of native prairies to cropland and residential development. Avoid hunting mammals with lead bullets, because hawks are susceptible to secondary poisoning from eating dead mammals with lead shot. Similarly avoid poisoning small mammals which can also have a negative secondary injury to hawks. Avoid removing older trees or all trees from an area.

Other wildlife that may benefit from habitat management for Swainson’s hawk include ferruginous hawks, horned larks, western meadowlarks and pronghorn antelope.

BirdLife International and Handbook of the Birds of the World. 2019. Bird species distribution maps of the world.  Version 2019.1. Swainson’s hawk

The Cornell Lab of Ornithology. All About Birds (Swainson’s hawk).