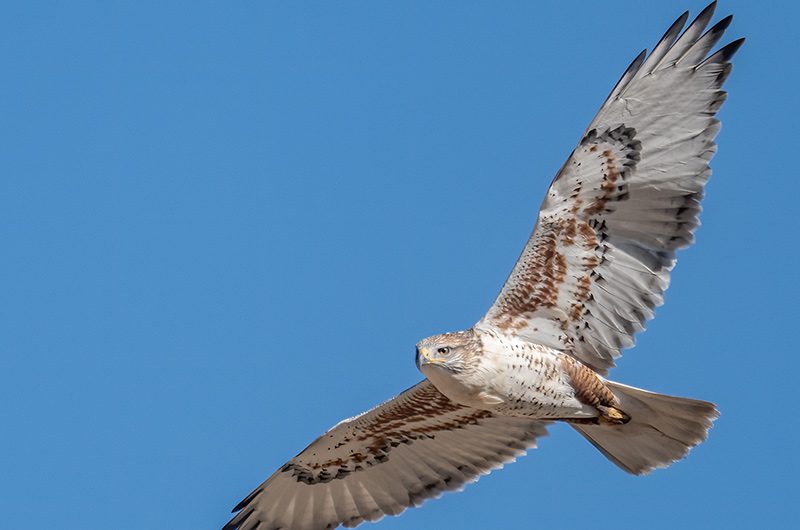 During the breeding season, Ferruginous hawk nests are not easily woven together for tree nesting, so they often build on the remains of pre-existing hawk or crow nests, or on the ground on a rocky outcrop.

This largest of North American hawks, at 22.1-27.2 in/56-69 cm — its species name is regalis — with a unique gray head, rich, rusty (ferruginous) shoulders and legs, and gleaming white underparts. A rarer dark-morph is reddish-chocolate in color. Found in prairies, deserts, and open range of Western North America, the regal ferruginous hawk hunts from a lone tree, rock outcrop, or from high in the sky. 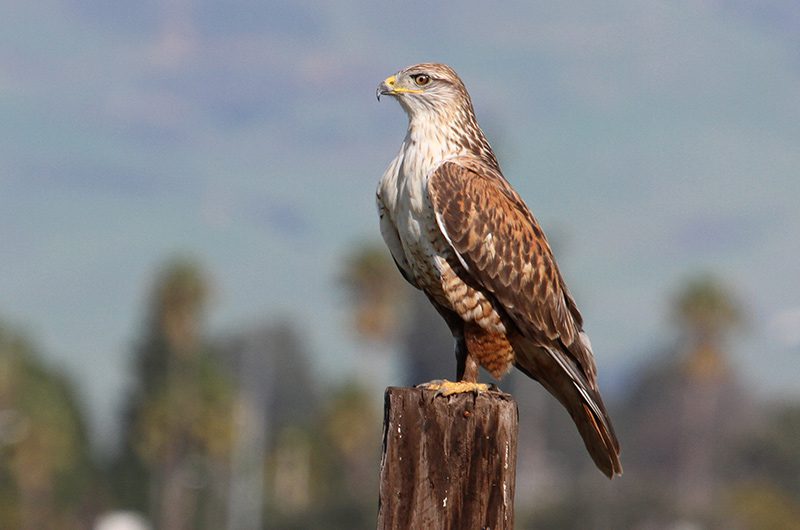 Ferruginous Hawks breed from northeastern Washington, southern Alberta and Saskatchewan, south to California and Texas. They migrate only as far south as southcentral and western United States and northern Mexico during the winter. Look for ferruginous hawks in the open country of Western North America, where they may be just a speck soaring high in the sky, albeit a brilliantly white speck, as light-morph ferruginous hawks are strikingly pale and distinctive.

These birds also perch on telephone poles and on the ground, where they can be hard to spot. In these wide-open spaces, learning to tell their shape at long distances is key to finding them: look for their long, relatively narrow and somewhat pointed wings. Also note their tendency to fly with their wings in a dihedral V shape – slightly raised above the horizontal. Occasionally they can be mistaken for a golden eagle due to their large size.

During the breeding season, their nests are not easily woven together for tree nesting, so they often build on the remains of pre-existing hawk or crow nests, or on the ground on a rocky outcrop.

Ferruginous hawks prefer open grasslands and shrub steppe communities. They use native and tame grasslands, pastures, hay meadows, cropland, and shrub steppe for nesting and foraging. Cropland and areas with dense (>30% cover) and tall (>6 in/15 cm) shrubs are avoided. Often nests are surrounded by rangeland or cropland. Vast open areas with lone or peripheral trees are preferred over densely wooded areas when trees are selected for nesting. Tree-nesting hawks seem to be less sensitive to surrounding land use, but they still avoid areas of intensive agriculture or high human disturbance. 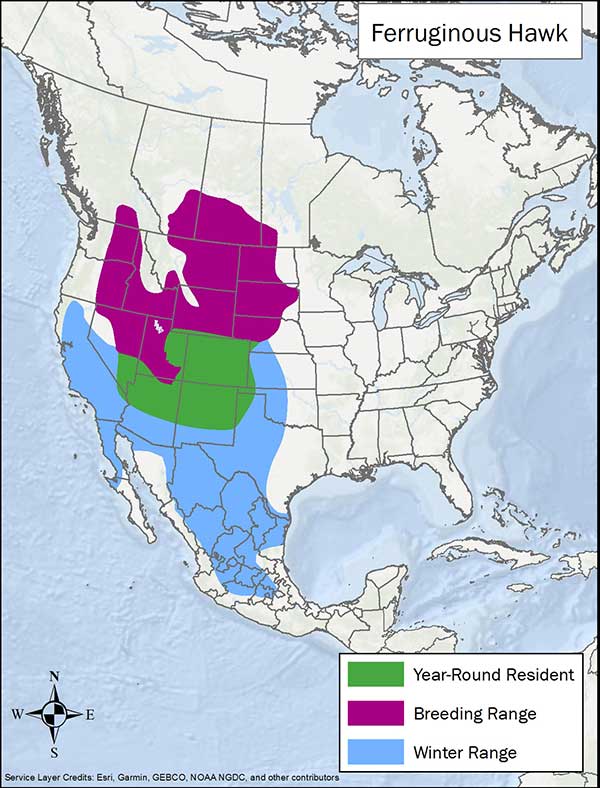 Moderate grazing can be beneficial to ferruginous hawks as it will reduce vegetative cover and make prey more visible. Conserve large tracts of native prairie and shrub steppe from conversion to monotypic stands of grass or cultivated agriculture. Nest areas should be supported and conserved through fencing of nest trees, supporting heavy tree nests that are at risk of toppling, and building artificial nesting structures where nest sites are otherwise lacking. Leave known nests undisturbed from 15 March to 15 July during the breeding season. Establish buffer zones around nest sites.

Avoid energy development and road construction near nesting structures. Avoid conversion of native prairie or shrublands to cropland as it can negatively impact prey and nesting habitat. Avoid removing large lone trees from the landscape. Avoid using lead bullets when hunting small game, one cause for fatalities in raptors is lead poisoning from consuming prey (small game).

Other species that may benefit from habitat management for ferruginous hawk include, Swainson’s hawk, burrowing owls, and lark bunting.

BirdLife International and Handbook of the Birds of the World. 2019. Bird species distribution maps of the world. Version 2019.1. Ferruginous Hawk

The Cornell Lab of Ornithology, Birds of the World (Ferruginous Hawk)

The Cornell Lab of Ornithology, All About Birds (Ferruginous Hawk)