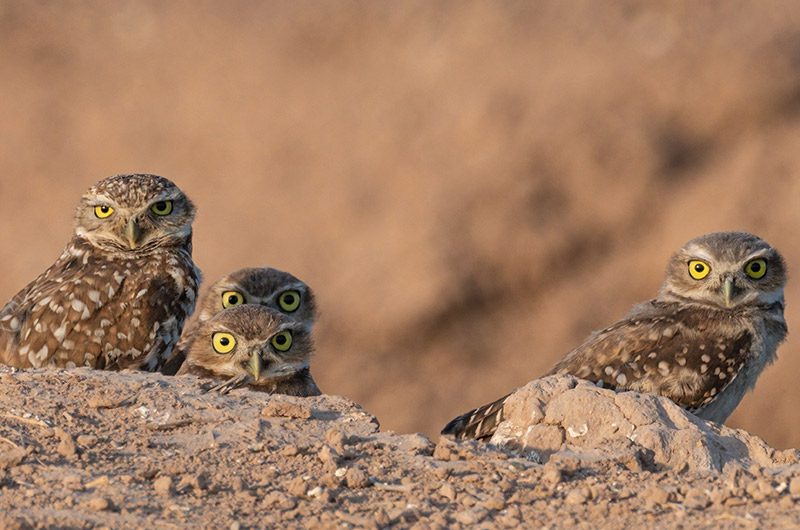 Before laying eggs, burrowing owls carpet the entrances to their homes with animal dung, which attracts dung beetles and other insects that the owls then catch and eat.

The burrowing owl is a small, sandy colored owl with bright-yellow eyes, at about only 10 in/25 cm tall. They live underground in burrows they have taken over from a prairie dog, ground squirrel, or tortoise; they’re usually located in shortgrass or grazed midgrass prairie. They coexist with burrow-dwelling mammals and rely on their presence to maintain the burrows. Their numbers have declined sharply with human alteration of their habitat and the decline in the populations of prairie dogs and ground squirrels. Burrowing owls are considered Endangered in Canada and rare in some states.

The owls arrive in the breeding grounds in March throughout the western Great Plains and southern Florida and begin to migrate south in August and September. They use open grasslands, deserts, prairies and agricultural areas, and can often be seen perched on fence posts looking for prey and keeping an eye on predators. Burrowing owls prefer grasslands grazed heavily by cattle or prairie dogs. They are very well camouflaged and amazingly small compared to the wide-open areas where they live. The best chances for seeing them are at dawn or dusk. They often reuse nesting sites and may return to the same breeding area for multiple years.

Before laying eggs, burrowing owls carpet the entrances to their homes with animal dung, which attracts dung beetles and other insects that the owls then catch and eat. 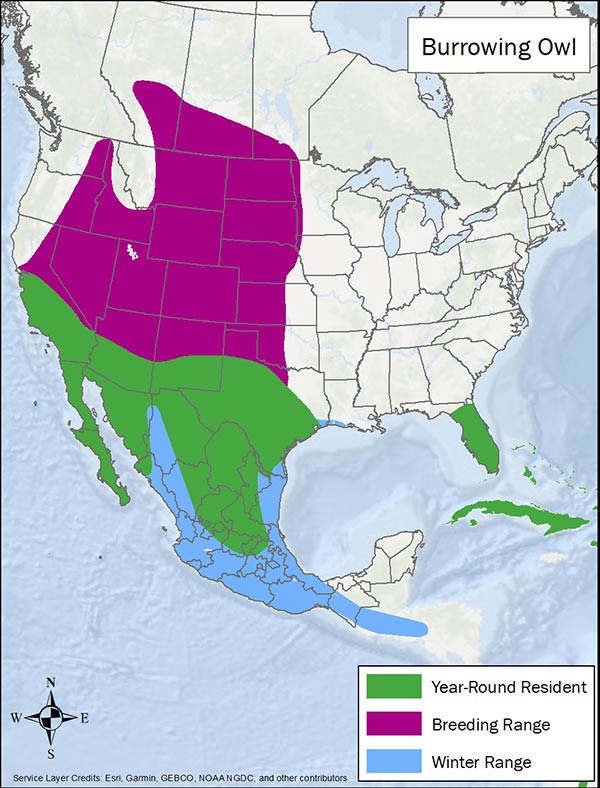 Maintain large, contiguous areas of native grassland, including areas of treeless plains and at least small prairie dog colonies. Rotational grazing can help generate a mosaic of vegetation conditions needed by burrowing owls. Most owl family units use as many as 10 satellite burrows, or burrows in the vicinity of the nest burrow. Management actions to conserve owls need to include conserving multiple burrows and foraging areas expanding beyond the colony. Successful nests have more active (used by mammals) burrows within 246 ft/ 75m of the primary nest burrow than unsuccessful nests. Foraging-area requirements are considerably larger than nesting-area requirements so a large intact landscape benefits burrowing owls. If maintaining prairie dog colonies is not possible, artificial nest burrows or PVC replacement burrows can be created. These artificial burrows are a highly effective conservation tool when natural burrows can no longer be maintained.

Lack of grazing can increase vegetation densities beyond which are undesirable for owls. Tall grasses around the burrows, eliminate their ability to see and be alert to predators. Eradication of prairie dog colonies is the biggest threat to burrowing owls. Programs like Operation Burrowing Owl could be replicated as an education tool to engage with landowners and land managers as stakeholders in owl conservation.

Other species that may benefit from habitat management for burrowing owl include mountain plover, horned lark, swift fox, black-footed ferrets and thick-billed longspur.

BirdLife International and Handbook of the Birds of the World. 2019. Bird species distribution maps of the world. Version 2019.1. Burrowing Owl