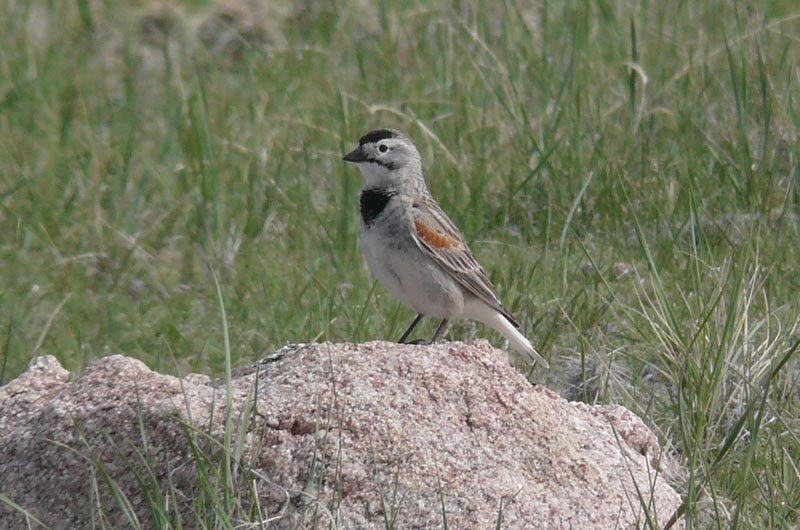 © Erin Youngberg/Bird Conservancy of the Rockies

Thick-billed longspur was renamed in 2020 from its former name, McCown‘s longspur and are about 2/3 the size of a robin at 5-6 in/12-15 cm tall. The male has a gray face with black crown and “moustache,” gray back with black streaking, white throat, black across the breast, and white belly. Chestnut-colored shoulders are especially noticeable in flight. An inverted “T” can be seen in the tail in flight, formed by a black band across the end of the tail, black central tail feathers, and white outer tail feathers. The female is similar to the male, but the colors are muted. The aerial song of the male consists of a tinkling warble, which is more complex than when perched.

Thick-billed longspurs arrive on their breeding grounds in the northwestern fringe of the Great Plains and the southern edge of the Canadian Prairie Provinces in April. They establish territories using an aerial display where the male flutters upward to a height of about 32 ft/10 m and then descends with outstretched wings held back to display the vivid white lining, with its white-and-black “T” patterned tail fanned, and issuing a tinkling, warbling song. They are often found in grazed pastures but may be seen on prairie dog towns or plowed cropland.

Thick-billed longspurs are restricted to a limited range within the Great Plains and are considered habitat specialists. They occupy open habitats with sparse vegetation such as shortgrass prairie, heavily grazed pastures, plowed fields, and dry lake beds (playas), with vegetation height 3 in/7.6 cm or less. Common habitats include prairies, deserts, tundra, beaches, dunes, and heavily grazed pastures. Nests tend to be oriented to the north, and many of nests are placed near clumps of grass, shrubs, plains prickly pear (Opuntia polyacantha), or cowpies. Nesting territories usually include 45–80% herbaceous cover and 15–25% bare ground, with little or no cover by forbs, woody plants, or cactus except for nest placement near taller structure (<10% shrubs) for protection from the sun. 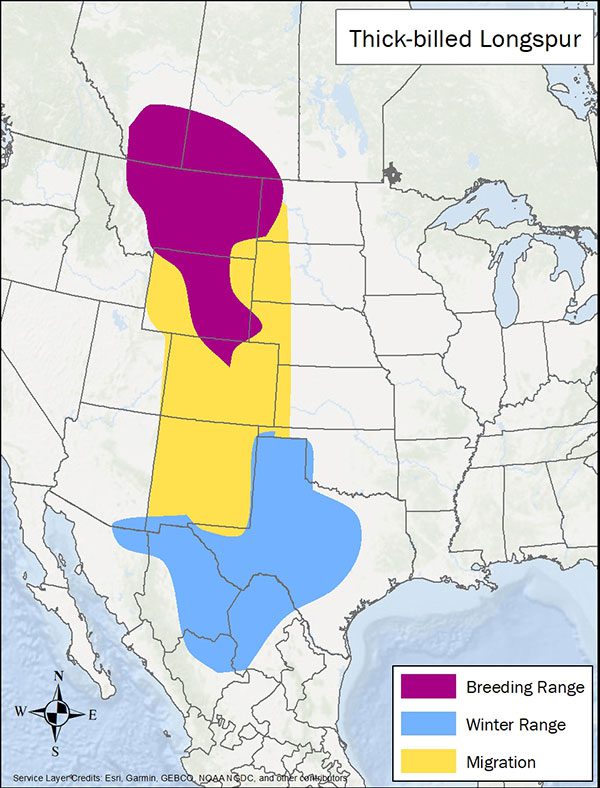 Where appropriate, manage for native shortgrass prairie of blue grama and buffalo grass.  Because thick-billed longspurs require very short grass and some bare ground for nesting, graze in the late growing season and non-growing season (late summer through winter), as well as graze heavier in wet years and moderately in dry years. Burn shortgrass prairie outside of the nesting season to create favorable vegetation conditions. Annual haying in late summer can create suitable breeding habitat for the subsequent year.

Avoid conversion of native shortgrass and mixed grass prairies to cropland and residential development.  If prairie dog population control is needed, choose an integrated pest management approach that meets goals without eliminating the entire colony or harming other species. If prairie dog control requires using chemicals, poison only active burrows.  Avoid use of pesticides on crops where possible. Avoid resting large areas where thick-billed longspur nest for more than one year.

Other wildlife that may benefit from habitat management for thick-billed longspurs include mountain plovers, burrowing owls, horned larks and pronghorn antelope.

BirdLife International and Handbook of the Birds of the World. 2019. Bird species distribution maps of the world.  Version 2019.1. Thick-billed longspur.

The Cornell Lab of Ornithology. All About Birds (Thick-billed longspur).