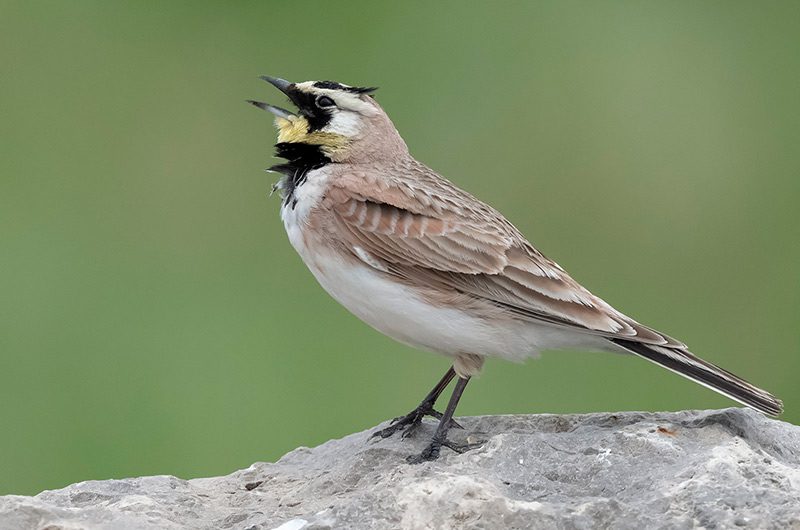 Horned larks are slightly smaller than a robin and approximately 7-8 in/17-20 cm tall. They spend most of their time on the ground rather than perched on posts or shrubs. The males appear to have “horns”— feather tufts which can be raised or lowered but are usually erect. The males also have a black mask around their eyes and a black bib on their chest. The females are paler and lack the prominent features of the male however look the same from afar on the prairie.

Horned larks are a partial migrant; permanent resident throughout most of their breeding range, migrating only from northern regions before winter. Fall migrants tend to flock and move by August – October. Like breeding arrival, birds can be seen in flocks in March – April and more often on the ground, rather than perched on a fence post.

A common, widespread bird of the open country, the horned lark prefers short, <3 in/7.6 cm, sparsely vegetated prairies, deserts, and agricultural lands, >15% bare ground is acceptable. Horned Larks favor bare, dry ground and areas of short, sparse vegetation with <65% herbaceous vegetation and <10% shrub cover. They avoid places where grasses are tall and areas with more than a few shrubs. Common habitats include prairies, deserts, tundra, beaches, dunes, and heavily grazed pastures. Horned Larks also frequent areas cleared by humans, such as plowed fields and mowed expanses around airstrips. In wintertime, flocks of horned Larks, often mixing with other birds on open ground, can be seen along roadsides, in feedlots, and on fields spread with waste grain and manure. 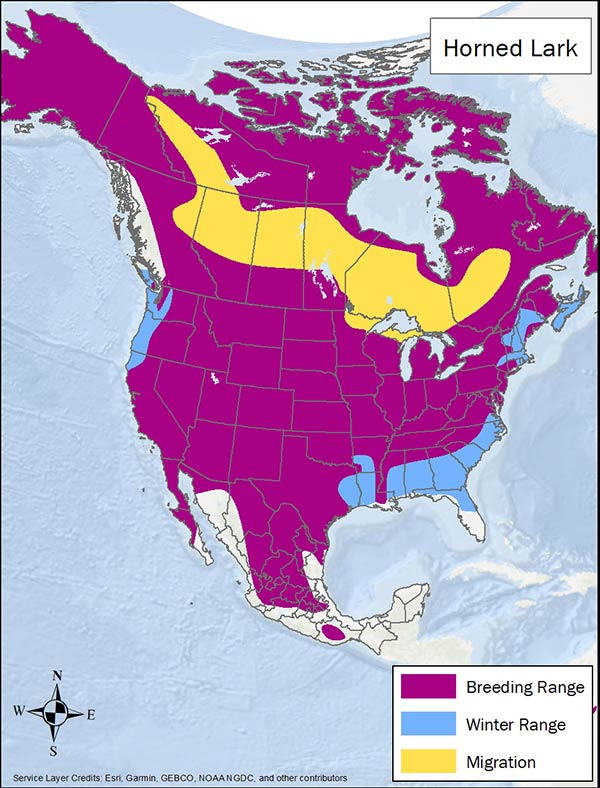 Where appropriate, manage for native shortgrass prairie of blue grama and buffalo grass. Grazing late in the growing season and into the non-growing season (late summer through winter) will create suitable habitat nesting habitat for horned lark— very short grass and some bare ground. Heavier grazing in wet years and moderate grazing in dry years may be required to ensure some habitat is available for nesting horned larks each year. Heavy grazing in the summer provides less breeding habitat than heavy grazing in the winter.

Burn shortgrass prairie outside of the nesting season to create favorable vegetation conditions. Retain some populations of prairie dogs at levels compatible with economic activities on the land. Annual haying in late summer can create suitable breeding habitat for the subsequent year.

Avoid conversion of native shortgrass and mixed-grass prairies to cropland and residential development. If prairie dog population control is needed, choose an integrated pest management approach that meets goals without eliminating the entire colony or harming other species. If using chemicals to control prairie dogs, poison only active burrows. Avoid the use of pesticides on crops where possible.

BirdLife International and Handbook of the Birds of the World. 2019. Bird species distribution maps of the world.  Version 2019.1. Horned lark.

The Cornell Lab of Ornithology. All About Birds (Horned lark).