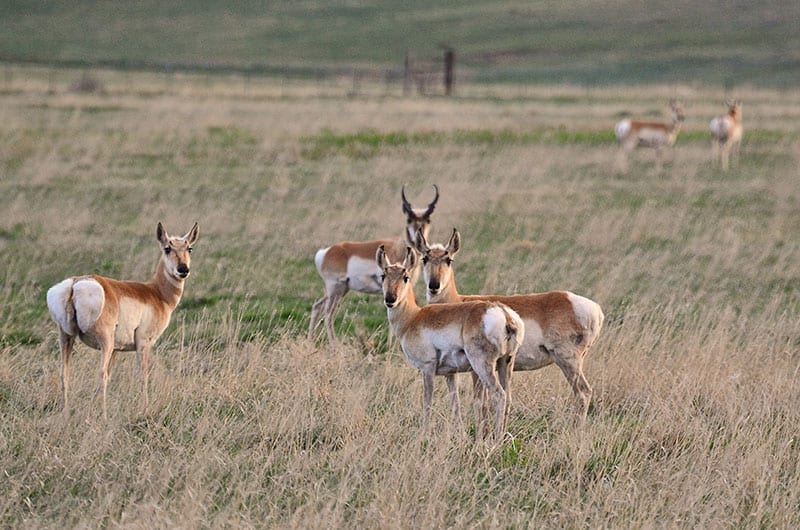 Female Pronghorns usually give birth to twins, with young females often giving birth to a single fawn. Pronghorn can reach speeds of 50 mph/80.5 kph and are North America’s fastest mammal.

Pronghorn are ungulates (hoofed mammal). They are similar in size and build to deer. Pronghorn have tan fur, white on belly and rump, two white stripes on the breast. Both males and females have a pair of horns. Females have small horns, while males have horns that are slightly curved, 10-12 in/20-30 cm in length, with single forward-projecting prong. They shed the sheath (outer part of the horn) annually. Pronghorn have large eyes and excellent vision. Pronghorn breed from late summer to fall, with fawns born in May–June.

Pronghorn antelope are a common sight in prairies from southern Saskatchewan to northern Mexico deserts, and from California shrub steppe to Nebraska prairie. Usually found in small bands. Large winter herds disperse in spring to form separate bachelor and female-kid groups through the summer. Some cold-climate populations migrate from one seasonal-use area to another, using the same routes each year. Migrating populations may travel 200 mi/320 km or more to leave areas of deep snow. Southern herds show localized movement but seldom migrate.

Females usually give birth to twins, with young females often giving birth to a single fawn. Pronghorn can reach speeds of 50 mph/80.5 kph and are North America’s fastest mammal. 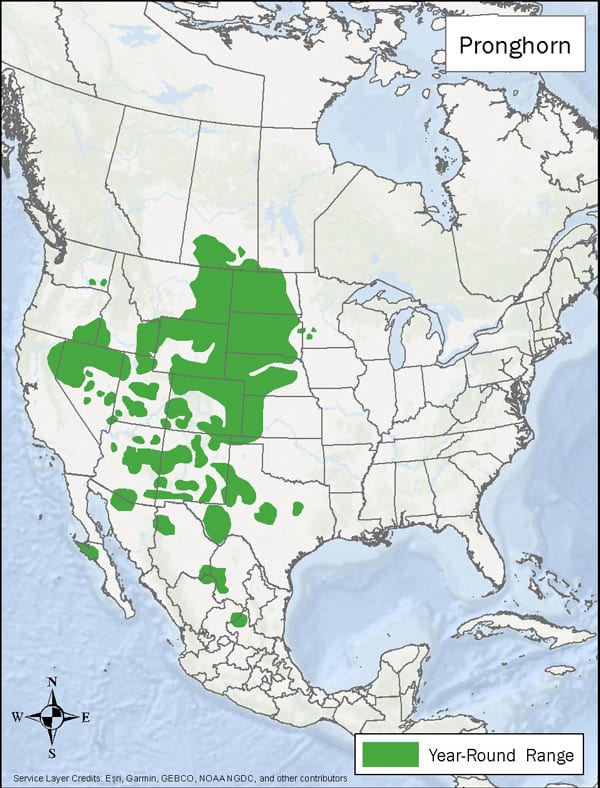 Grazing management that varies grazing intensity and season of you will benefit pronghorn.  Actions that lead to a diversity of forbs and shrubs, as well as habitat diversity are beneficial. For example, prescribed fire should be applied when weather and vegetation will promote a cool burn that may decrease shrubs, and not harm grasses or forbs. As pronghorn require access to water, maintaining springs/seeps and water developments is beneficial in maintaining access during critical times. Protect playas for drinking water and nutritious forage. As pronghorn will often go under fences, where possible, install wildlife friendly fencing that has a smooth bottom wire at least 16 in/41 cm from the ground, (18in/46 cm is better) and the top wire should be no higher than 40 in/101.5 cm. Seasonally leaving gates open can improve movement through the landscape. Consider if a permanent fence is required to meet management goals and if so, placement should consider established wildlife movement patterns, topography and access to important habitat.

As pronghorn have evolved in an open landscape with no vertical barriers, they can easily get injured trying to jump over or go under barbed wire fences. Avoid installing incompatible fencing such as 4-wire barbed wire or woven mesh as this style of fence more than doubles mortalities. Recently weaned fawns are particularly vulnerable to mortality when they are unable to cross through a fence. If managing an area for reduced shrub densities, avoid treating large (>5,000 ac/2,025 ha) portions of the habitat.

Other species that benefit from management for pronghorn include mule deer, swift fox, greater sage-grouse, western meadowlark and other grassland species. Wildlife friendly fences are good for deer, elk, black bears and many other species.

Montana Fish, Wildlife & Parks. 2012. A Landowner’s Guide to Wildlife Friendly Fences: How to build a fence with wildlife in mind, 2nd Edition.