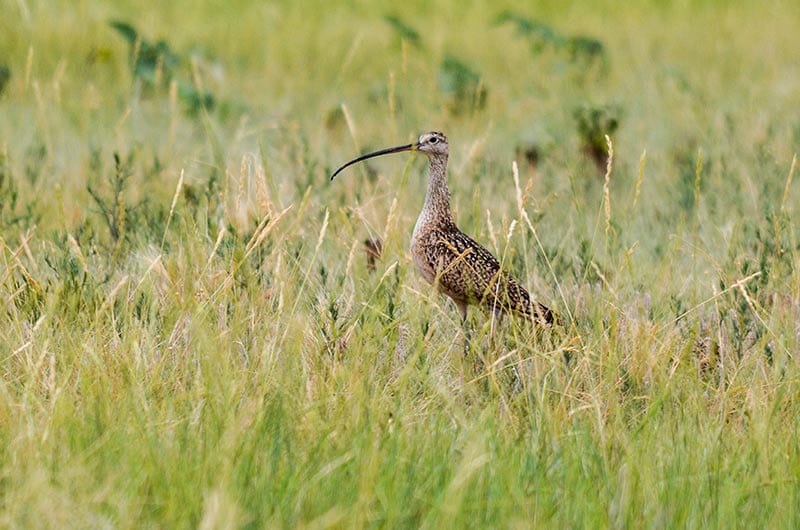 Adult curlews will vigorously chase and attack potential nest or chick predators including coyotes, raptors, and people. Adults become more aggressive towards predators as their eggs begin to hatch.

This is North America’s largest shorebird, standing about 16 in/40 cm tall, or about the size of a chicken. The overall color is cinnamon brown, lighter on the breast and belly, with brown markings, and rusty wing-patches in flight. Males and females have similar coloration year-round. The most striking feature of these birds is the extremely long, downward-curving bill, about 5.4 in/13.7 cm in length for the male and 6.7 in/17 cm for the female. Their long bills are used to pick up insects and probe for food deep in mud, soft soil and animal burrows.

Distinguished from other grassland birds and shorebirds by its large body mass and extremely long decurved bill. Their “cur-lee” calls can be heard for long distances across the prairie. Can best be seen in open shortgrass prairie without trees or shrubs. Long-billed curlews are early-season migrants and arrive at their breeding grounds March-April and leave their breeding grounds as early as July.

Adult curlews will vigorously chase and attack potential nest or chick predators including coyotes, raptors, and people. Adult curlews may perform an aerial display when threatened by a ground predator and may fake an injury to protect a nest from larger mammalian predators. Adults become more aggressive towards predators as their eggs begin to hatch.

Curlews nest in a scraped-out depression on the ground, in shortgrass and mixed-grass prairie, sagebrush shrublands, and occasionally in idle cropland such as wheat stubble. They often nest near conspicuous objects, including livestock dung piles, rocks, and dirt mounds. They prefer short vegetation, and nest where vegetation is <12 in/30 cm and more often where it is <4 in/10 cm tall. Curlews will not nest in areas with tall grasses >5 in/13 cm at nest site, Total vegetation cover is often <50%. After hatching, the adults will move the chicks to areas of taller grasses with scattered forbs and shrubs, apparently for protection from predators and weather extremes, although they avoid areas of dense vegetation and litter, possibly because of low visibility and difficulty of travel for chicks. 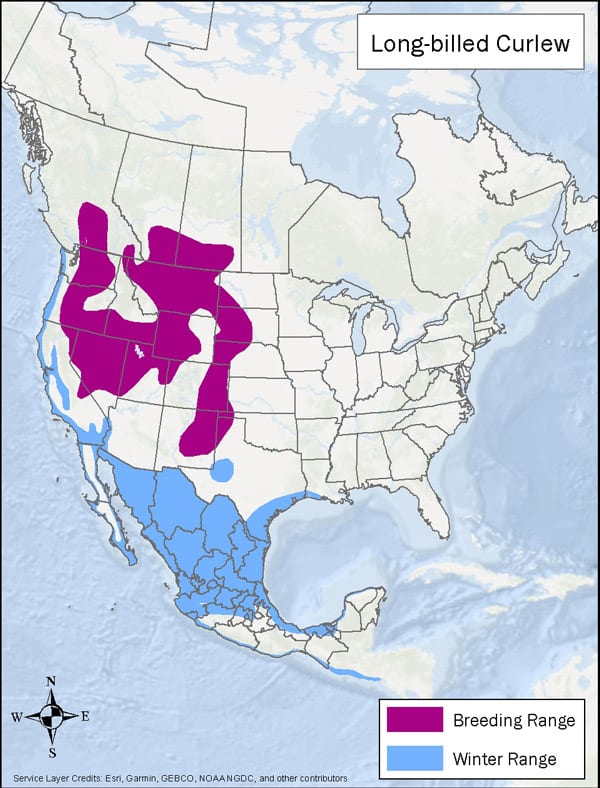 Utilize prescribed grazing or periodic prescribed burns to maintain a patchwork of shortgrass, taller grasses, and scattered shrubs for foraging, nesting and chick-rearing. When seeding rangelands, focus on native shortgrass species such as blue grama, buffalograss, and forbs rather than taller, non-native species. Control invasive plants such as annual brome, leafy spurge and knapweed, which do not provide the structure favored by curlews, and displace native short and mixed-grass prairie plants. Where possible, restrict or lightly graze cattle during early summer in wetlands and wet areas such as moist draws and meadows, as curlews utilize these areas for foraging with their young.

During the nesting season, avoid disturbance to curlews at known nesting sites by restricting activities such as oil and gas exploration, water well development, and similar activities. Where possible, avoid early summer grazing of sheep in shortgrass habitat occupied by nesting curlews. As sheep tend to travel in tight herds resulting in nest destruction, graze sheep in ways to minimize impacts to curlew nests when possible.

Other species that may benefit from habitat management for long-billed curlew include greater short-horned lizard, mountain plover, horned lark, and swift fox.

BirdLife International and Handbook of the Birds of the World. 2019. Long-billed Curlew, Bird species distribution maps of the world.  Version 2019.1

The Cornell Lab of Ornithology. Birds of the World (Long-billed curlew).