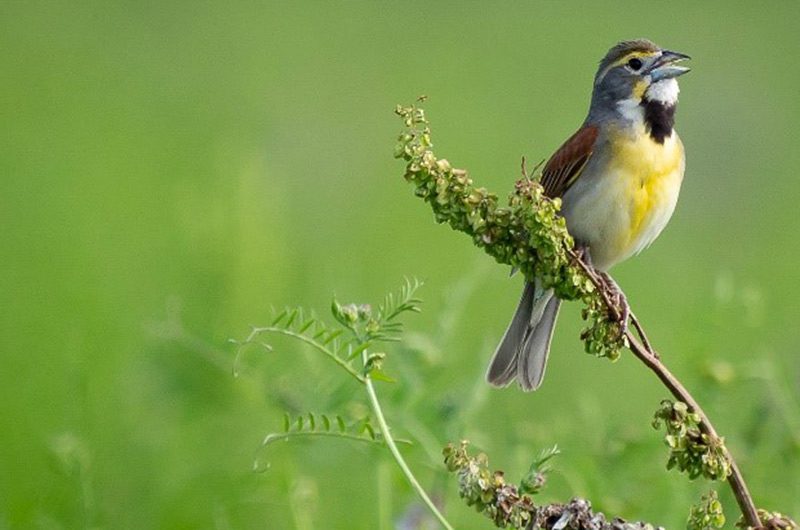 Dickcissels are a compact, sparrow-shaped bird, about 5.5-6 in/14-16 cm long. Males resemble small meadowlarks with a bright yellow chest and a black “V” throat patch. They also have a grayish head with yellow on the face, a white chin, reddish-brown shoulders, and a brown and streaky gray back. Females look similar with less bold coloring and no black “V”.

In the spring and summer, look for dickcissels in prairie grasslands, overgrown pastures, and croplands in the central and eastern Great Plains. Males perch on shrubs and fences to sing and attract females. Listen for their namesake song: a buzzy “dick dick dick see see see.” Most dickcissels spend winter in the seasonally flooded grasslands and savannas of central Venezuela, but they may also winter in southern Mexico and Central America.

Dickcissels breed in open grasslands with dense, moderate-to-tall vegetation (>10 in/25 cm), abundant forbs, and moderately deep litter. These conditions can be found in native and restored prairies, pastures, hayfields, fallow agricultural fields, and no-till crop fields. An abundance of forbs (>50% cover), such as alfalfa and leadplant, is an important feature in breeding habitat as it provides song perches, nesting cover, and insects to eat. Dickcissels usually nest above the ground (<6.5 ft/2 m) in dense cover of grasses, forbs, or low shrubs, and less frequently place nests on the ground in dense vegetation. Although dickcissels will use fragmented grasslands, nest success and adult survival may be higher in areas with larger, contiguous grassland patches. 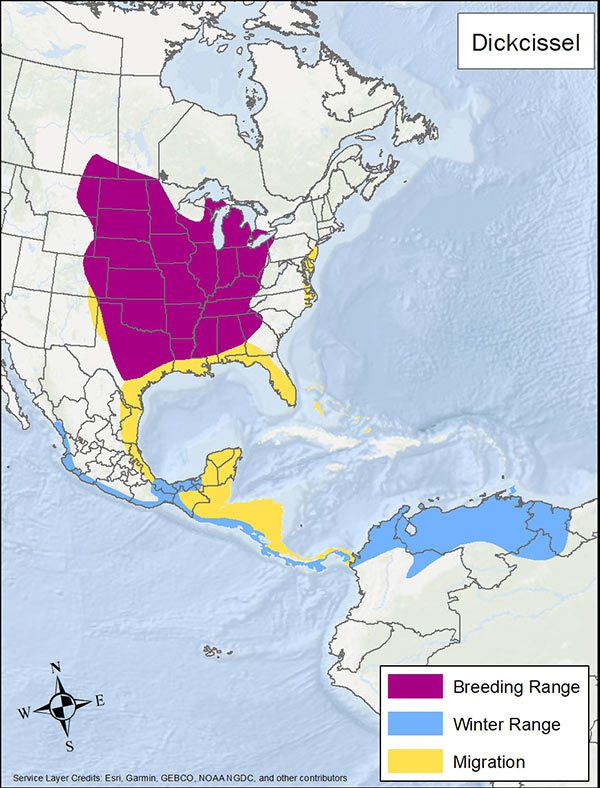 Dickcissels breed in open grasslands, so management practices that prevent woody encroachment, like mowing and burning, can be beneficial if conducted outside the nesting period. Because these activities also reduce vegetation density and remove litter, it may be beneficial to have nearby areas that are not burned or mowed for dickcissels. Periodic burning (every 3-5 years) should promote grass growth and allow sufficient accumulation of litter.

Rotational grazing that rests some pastures during nesting can provide dense vegetation needed for nesting dickcissels. Restoring agricultural fields to native grassland (e.g., the Conservation Reserve Program) will benefit dickcissels, and moderately grazing these restored fields should maintain or increase forb abundance. In agricultural areas, untilled or reduced tillage fields will be more beneficial to dickcissels than traditional tilling practices.

Avoid heavy grazing that reduces grass cover and height during nesting season. Avoid disturbing habitat (e.g., hay-mowing) during the breeding season (late April to August). Avoid mowing later than mid-September, so vegetation has time to regrow before the following spring. Avoid pesticide exposure which could be harmful to adults and nestlings, and reduce insect food sources.

Other open grassland species that may benefit from habitat management for dickcissels include grasshopper sparrows, eastern meadowlarks, and bobolinks.

BirdLife International and Handbook of the Birds of the World. 2019. Bird species distribution maps of the world. Version 2019.1. Dickcissel

The Cornell Lab of Ornithology, Birds of the World Dickcissel

The Cornell Lab of Ornithology. All About Birds Dickcissel