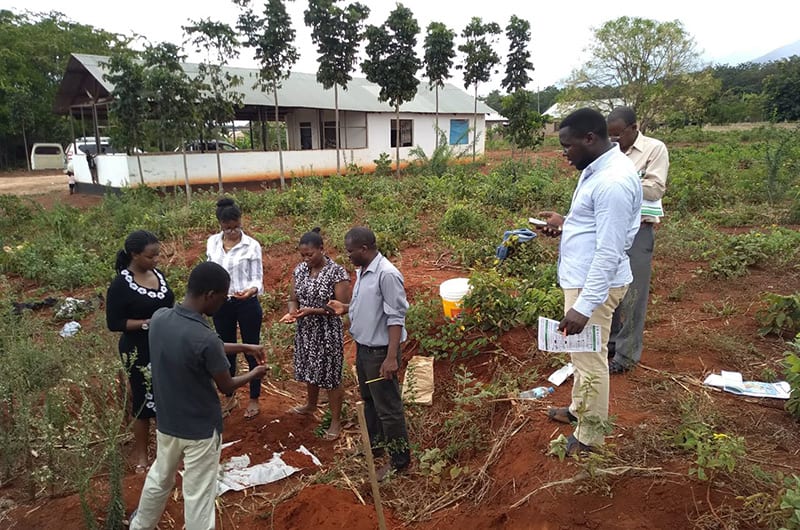 LandPKS trains 111 agriculture professionals on using the mobile app to characterize sites in their communities.

Various agricultural practitioners including district extension officers, agricultural college trainers, researchers and agricultural seed producers in Morogoro region have expressed their excitement as they were introduced to LandPKS. This was demonstrated after being trained to use the LandPKS mobile app and its application in identifying potential of the land and how it can be used as a decision-making tool for land use planning and management. The training conducted by LandPKS country coordination officer for Tanzania Mr. Elifadhili Daniel from 10th-20th Dec. 2018 in Morogoro whereby agricultural professionals from Chalinze District, Morogoro District Council, Mvomero District Council, WOPATA, agricultural researchers from Tanzania Agricultural Research Institutes – Cholima Dakawa and Ilonga centres, Ministry of Agriculture Training Institute trainers and field extension officers from Agricultural Seed Agency( ASA) were reached. A total of 111 professionals were trained at this phase and were able to use LandPKS application.

The training was organized as part of LandPKS developers’ efforts to roll out the technology to agricultural practitioners in Tanzania and capacitate them to; characterize local site conditions (soil, topography, climate) using LandPKS mobile app, analyze and interpret outputs in specific contexts and to use LandPKS for collecting information that will facilitate decision making for sustainable land use planning.

To facilitate quick understanding, the training was divided into two phases, the theoretical part whereby the participants were oriented to the LandPKS application and assisted to download and troubleshoot. The second part encompassed a field practical training where the participants were involved in soil texturing and data collection using the LandPKS app. This was the most exciting part of the training where they appreciated site-specific instant results by LandPKS.

Agricultural professionals reached out during the training described how LandPKS would be a great help in their day to day activities. ASA seed experts were pleased with the advent and introduction of this technology by acknowledging that it just came at the right time. ”We have a larger field exceeding 3000 acres. LandPKS tool will help characterize our soils at various parts of our field and guide us in planning and we will start this exercise tomorrow, however we may need more training and practice to perfect it’’. Similar comments were made by one of the principal TARI researchers at Ilonga Station during the wrap up session, who commended efforts made by LandPKS developers to bring easy to use technology for soil characterization and ultimately land use planning, emphasizing on more training and guidance from the country coordination officer.

On the other hand, LandPKS also gave tremendous zest to District agricultural extension officers reached, who expressed their eagerness to learn more about the app and train their colleagues who did not attend the training. One could notice the interest on their faces as they were actively involved in digging and working the soils and follow the guide to determine the textural class. 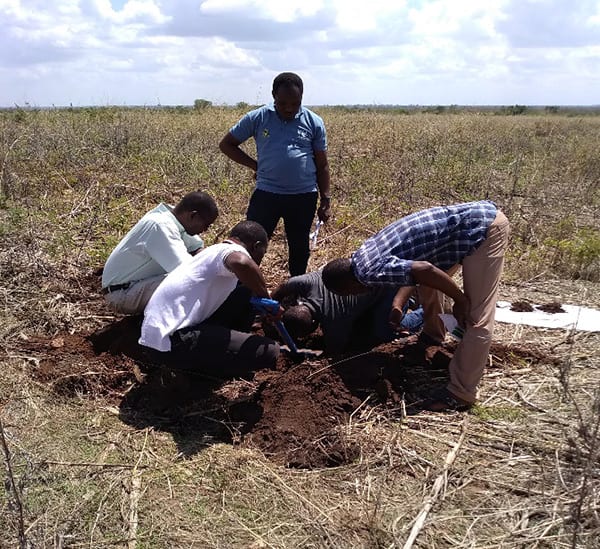 Researchers digging a pit at the ASA farm, Morogoro, Tanzania

Both indoor and outdoor training sessions were very interactive where a number of questions pertaining the app, interpretation of the results and the use of LandPKS website resources were asked and answered and comments given which were subsequently communicated to LandPKS developers.