From Recycling to Farming and Back Again 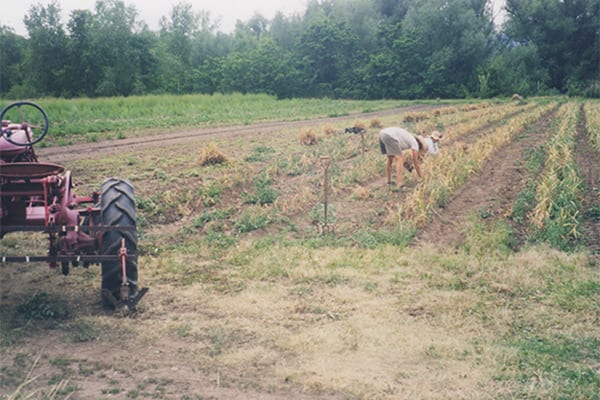 From Recycling to Farming and Back Again

Part one in a series of blog posts that tells the story of how Eco-Cycle and LandPKS came to collaborate.

This post is part one of a three-part series about the story of LandPKS’s partnership with Eco-Cycle. The series also tells a bigger story: one about synergies between organic waste management and soil health.

Like soil, life has layers. We go through phases and, more often than not, certain themes recur. Some collaborations only happen on the surface; others take root much deeper, connecting multiple layers of experience. This series of blog posts tell the story of how Eco-Cycle and LandPKS came to collaborate. It also tells a bigger story: one about synergies between organic farming, organic waste management and composting, and the health of soil. This first blog post tells the story of Dan Matsch, Manager at Eco-Cycle, and how he came to understand the fundamental connection between our two organizations.

Every summer when Dan Matsch was a little kid, his family would drive from Colorado to Iowa, where his uncles owned a farm. Dan loved it there: the animals, the tractors and equipment, and being outside. “The farm was like Disneyland for me,” he says. However, growing up just east of the Rocky Mountains near Denver, where summers are short and the climate is dry, farming didn’t have much appeal, and Dan wouldn’t be reintroduced to farming until he was in his twenties.

For college, Dan studied architecture at the University of Michigan, but his real education began after graduation. He stayed in Ann Arbor and rented a room in a house that was owned by one of the founders of Recycle Ann Arbor, a non-profit waste management agency. Through his housemate connections, Dan started working at Recycle Ann Arbor too, which began his career in the recycling business. Yet, an even more formative experience he had while living in that house was farming in the backyard.

“I was recycling for a job and gardening for fun.”

Reflecting on his first summer in that house, Dan says that the backyard “seemed completely wild to me. It was a jumble of trees and shrubs. I had no idea what was going on back there.” However, soon his housemates started bringing fresh fruit and vegetables in from the yard — “incredible stuff,” he remembers. “I can remember the first time my housemate came into the house and handed me a peach. I didn’t even know there was a peach tree out there. It tasted outrageous.”

In addition to the taste of the food, Dan loved the idea of providing for himself. There was an appeal to self-sufficiency, of growing something from start to finish. He sums up that period in his life this way: “I was recycling for a job and gardening for fun.”

A few years later, Dan enrolled in a program for agroecology at the University of California Santa Cruz. The program is built around a working farm, which the small cohort of under 30 students is responsible for keeping afloat. Looking back on the experience, Dan says, “It was fabulous. Immersive. You live there, you work there, you’re all in. I can’t imagine better preparation for farming on your own.”

Dan met his wife, Carol Conigliaro, in the program, and they planned to remain in California to farm after graduation. However, the plan changed when his sister married and Dan came back to Colorado for the wedding. His parents had purchased a new property in Boulder County. While visiting, he saw some organic farming going on in the neighborhood and thought to himself, “Good enough!” He told Carol that he thought it could work, and she was open to the idea. In 1989, they moved to Colorado to start a new farm on the family land.

“You couldn’t start more from scratch than we did, beginning with the soil, or lack thereof. It was very sandy and thin,” Dan says. Though he had ordered some lab tests of soil samples and talked to the neighbors about their land, it wasn’t adequate to really understand the variety of soil conditions on their farm, which they named Gem o’ the Field. Located on the Left Hand Creek floodplain, the land had been scoured by fast-moving water, which left rocks and rubble behind. As Dan dryly puts it, “it’s not exactly the Nile floodplain.”

In addition to the difficult soil, Dan recalls that there was no infrastructure to speak of: no irrigation system, no power, and no equipment. In spite of the significant challenges at the beginning, they made it work. With some help from his dad, Dan bought an old tractor. Dan learned how to weld, and they built a greenhouse for starting transplants. 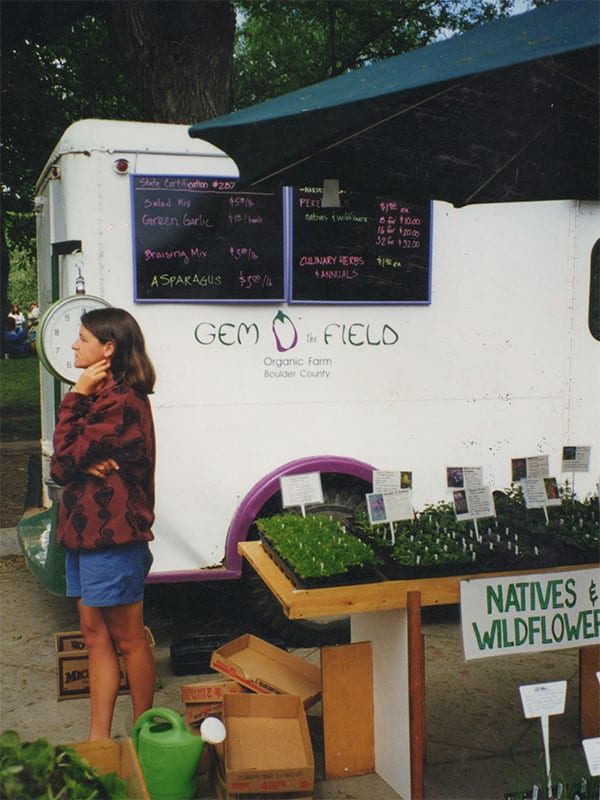 Carol Conigliaro at the Boulder County Farmers’ Market stand with the milk truck, circa early 1990’s. They sold native and wildflower starts in the spring for early income. © Dan Matsch

Because the farm was at the base of the foothills, Dan and Carol could grow cool-season crops through the summer. The Boulder County Farmers’ Market was a good way to ease into the market, and theirs became the go-to stand for mixed greens. They bought an old milk truck to keep their produce fresh at the market, which gave them an extra competitive edge. After a couple of years, the farm was working, and Dan and Carol were making a modest income.

When it came to planning, however, Dan and Carol had different aspirations. While Dan was focused on improving infrastructure and expanding the farm, Carol wanted to pursue other activities in the off-season. Eventually Carol went back to school and got a degree in Chinese medicine and Dan continued to run the farm without her. “But you know, it eventually caught up with me,” he says.

“I had employees, and this new burden of accounting and payroll. I wasn’t realistic about the time that took. I would do it in evenings and in my spare time, but it became all-consuming. For at least nine to ten months of the year, I was on seven days a week, slowly burning myself out. I loved it, but I had to face the fact that my body was kind of breaking down.”

When Dan turned 40, he reevaluated. The farm was on marginal land and there was no clear possibility of expanding into better ground. He thought that, if he wanted to keep farming, he would have to start over somewhere else. “I didn’t feel like I was up for that,” he says. Dan stopped farming in 2001 and returned to his first line of work—the recycling business. He’s been working at Eco-Cycle ever since.

In 2013, a big flood swept across the Left Hand Creek floodplain. They had 18 inches of rain over the course of three days in September, usually one of the driest months. The flood washed away ten acres of topsoil. Dan says he will never forget walking through the property after the water subsided. He saw his soil profile for the first time in the eight-foot-deep arroyos: “The topsoil was sandy, but ok. Below it was two feet of rubble, then another six inches of topsoil, then another two feet of rubble, then another six inches of topsoil. That completely changed my perspective on the land, and I understood why I was having so much trouble.” Over three days, a flood revealed why ten years of farming had been so challenging. 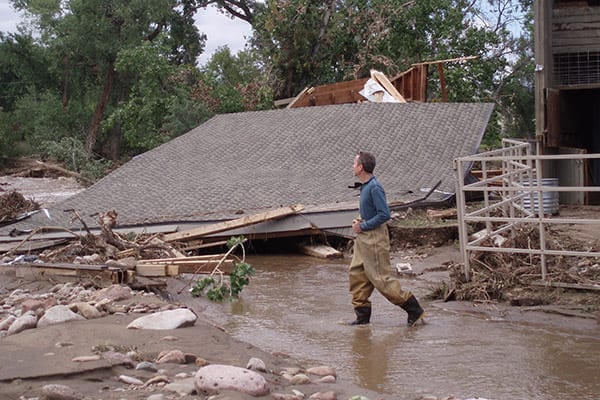 “If I had had LandPKS at that time, I really doubt that I would have farmed there.”

LandPKS could have helped them in several ways, Dan explains. First of all, LandPKS could have helped them track management decisions and better understand what methods worked. Just trying to keep the soil moist required constant work, and Dan estimates that he spent a quarter of his time moving irrigation pipe. Though they paid a lot of attention to their soil, they didn’t have good tools for measuring it or for documenting their soil management decisions. Dan says that the LandPKS LandManagement module could have helped him keep better records and see some patterns that eluded him as a farmer.

The LandInfo module also could have been of use. “LandPKS offers immediate feedback, which would have been helpful to get a better sense of the whole property. The irony of it was, we were using the wrong part of our land,” Dan tells me. “Left Hand Creek bisected our property: the floodplain is on one side, and that’s where all of the development was. Across the creek, it’s a completely different ecosystem.” 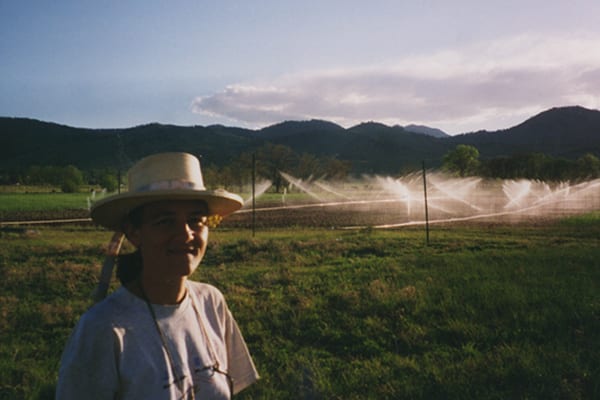 There were a number of challenges associated with expanding across the creek, including the necessity of hiring more employees, and it took seven years before Dan was ready to do it. When he eventually did expand the farm to the other side of the property, he discovered the soil was a Valmont, much better soil for agriculture. “If we had had LandPKS, we would have learned exactly what that soil across the creek was from the start, and that could have completely changed what happened.”

For Dan, farming in Boulder County was bittersweet. “We had a good 13-year run. Our stuff was good. We poured our heart and soul into it and it showed. We had a really good reputation at the farmer’s market. I had a lot of pride in what we were able to accomplish under pretty tough conditions, but I wouldn’t do it again, and if I had had LandPKS at that time, I really doubt that I would have farmed there.”

Over the years, Dan and Carol learned a lot about soil. Since their sandy soil required a lot of added organic matter, Dan began making his own compost out of manure from a nearby goat dairy. Eco-Cycle, one of the oldest and largest non-profit recyclers in the United States, approached Dan when he stopped farming. They needed someone with composting expertise who could take on the challenges of organic waste management. The initial idea was to transport organic waste to local farms, where the composting would then happen on site. Did that work, I asked Dan? “No. But there are other possibilities, and I’ve spent the last 19 years trying to figure that out.”

Continue reading part 2 in this series.