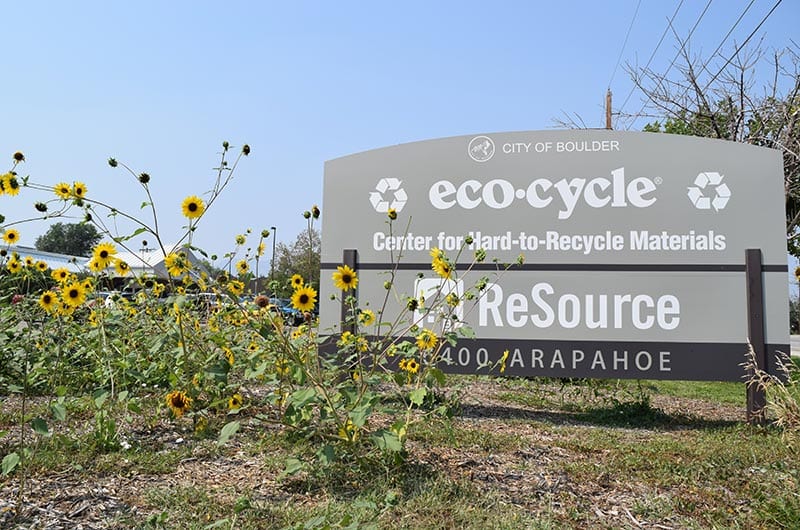 Part two of the story of Eco-Cycle and LandPKS, about the synergies between organic waste management and soil health.

Part two in a series of blog posts that tells the story of how Eco-Cycle and LandPKS came to collaborate. It also tells a bigger story: one about synergies between organic waste management and soil health. If you haven’t yet, read part 1 first.

After over a decade of managing Gem o’ the Field, an organic farm just north of Boulder, Colorado, Dan Matsch found himself at a crossroads. He had just turned forty. Though Gem o’ the Field did brisk business at the Boulder County Farmers Market and was making a modest profit, Dan still didn’t have the funds to hire the full-time management staff he desperately needed. So, in 2001, Dan planted his final season of crops. That same year, he joined Eco-Cycle, where he already served on the volunteer board of directors, as an employee.

When Dan joined Eco-Cycle, the company was focused on one big question: how to build zero-waste communities. They steered their attention specifically towards organic waste. Comprising about 30% of the total waste stream, organic waste includes food scraps and garden trimmings, and, if uncontaminated by other waste such as plastic, is entirely compostable. The directors of Eco-Cycle wanted to look into the possibilities of composting on local organic farms. It was a research project, and they asked Dan to take it over.

After over a decade of working as an organic farmer and building his own compost, Dan seemed predestined for the job. However, he quickly unearthed an inconvenient fact: the State of Colorado does not allow for organic waste to be brought to farms for composting. The project was a dead end, its premise against state regulations. For a couple of years, Dan put composting on the back burner to work on another new Eco-Cycle initiative: the CHaRM.

In the same year that Dan joined the staff, Eco-Cycle opened its Center for Hard to Recycle Materials, or CHaRM, and they asked Dan to manage it. The first facility of its kind in the United States, CHaRM began by recycling select electronics. Today, CHaRM recycles all types of electronics, as well as hard-to-recycle plastics, packing materials, appliances, mattresses, and more. Thinking back on the intensity of those first years at Eco-Cycle, Dan says, “the reality was, I hardly had any time to think about compost, because I was the only employee at CHaRM!”

Composting and recycling in Boulder, Colorado, in the early 2000s looked very different than it does today. The City of Boulder had no curbside program for organic waste collection, except for yard-waste, until 2006. In 2004, Eco-Cycle launched Colorado’s first commercial food waste collection program. Because of the special kind of truck required for residential hauling, Eco-Cycle stuck with the commercial side of things, picking up organic waste from restaurants and grocery stores and hauling the waste to A1 Organics in Golden, Colorado.

Also around this time, Dan and his colleague were shown a compost tea brewer at a trade show. They bought it on the spot, and Dan started brewing compost tea at CHaRM. “By then, a bunch of people were excited about recycling their organics, so we let people come to CHaRM with their kitchen scraps,” Dan explains. At CHaRM, this waste was vermicomposted to brew a “tea” of beneficial soil microbes and soil nutrients, which could then be poured into a watering can or an irrigation system and easily distributed across cropland. It wasn’t the massive on-farm composting program with curbside pickup that Dan had once dreamt of implementing, and didn’t have the benefit of adding organic matter to the soil, but it was a quick and easy way to start creating a compost product at CHaRM.

Back to the Farmers Market

If there was a single message that Eco-Cycle sought to convey in the early 2000s, it was that zero-waste and composting went hand-in-hand. In 2004, Eco-Cycle launched their first zero-waste event at Dan’s old stomping grounds, the Boulder County Farmers Market. It gave Dan a strange feeling to go back to the farmers market, which he had just left three years ago, to present them with the idea. However, his familiarity with the market was an advantage when it came to organizing the event. “I promised them we would take care of everything,” Dan recalls.

Zero-waste events were a brand-new concept, and Dan and Eco-Cycle needed to define the parameters. There would be no trash cans, only recycling and compost bins.  Food vendors would be required to use compostable food packaging. A1 organics had agreed to receive the compost from these events. Sometimes, a few of Eco-Cycle’s dedicated volunteers would act as goalies for the bins, making sure that people put the right types of waste in each. However, Dan found that the most critical factor was signage design. It was crucial that the bins had clear, appealing signage so that people could comply with the disposal rules.

Dan and others Eco-Cycle thought that, as long as they were present at the farmers market, they might as well sell a product. As BCFM only allowed vendors to sell what they’d produced themselves, Eco-Cycle began selling their compost tea. But as a former BCFM vendor, Dan wanted to make sure that the product he was selling actually worked, so he began conducting compost tea trials at CHaRM and on his old farm. 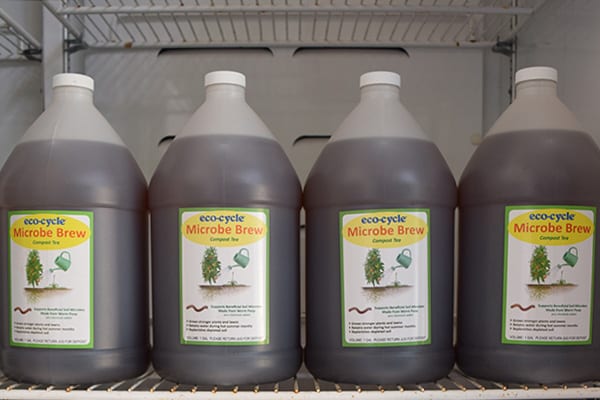 Bottles of Eco-Cycle’s microbe brew tea in the fridge

Dan’s experiments were not particularly scientific, but they did seem to indicate some benefits of applying compost tea. “For example, I had this big, empty greenhouse at the farm. Every year we would have an outbreak of grasshoppers inside the greenhouse. I planted some trays of basil in the greenhouse, half with and the other half without tea. But I had completely forgotten about the grasshopper outbreak! I showed up one day and immediately knew: oh no, the grasshoppers had hatched. The control basil was shotgun-riddled with holes. On the test side that had been treated with compost tea, there were only a couple of holes.” Dan’s interpretation was that the tea’s microbes seemed to build healthier soil, which grew healthier plants.

It became Dan’s passion to demonstrate to people that it’s possible to create high-value products like compost tea out of food waste.

A transformative moment for Dan was hearing John Wick of the Marin Carbon Project speak at a conference in 2012. Wick’s message of hope for climate change mitigation through what he called “carbon farming” gave Dan “a new sense of purpose. When I heard him make this connection between compost and climate change, bells went off.” From then on, educating people about the connection between soil health and climate change became Dan’s mission, and Eco-Cycle and CHaRM would provide him with the scaffolding for outreach and collaboration that would enable the next decade of his career.