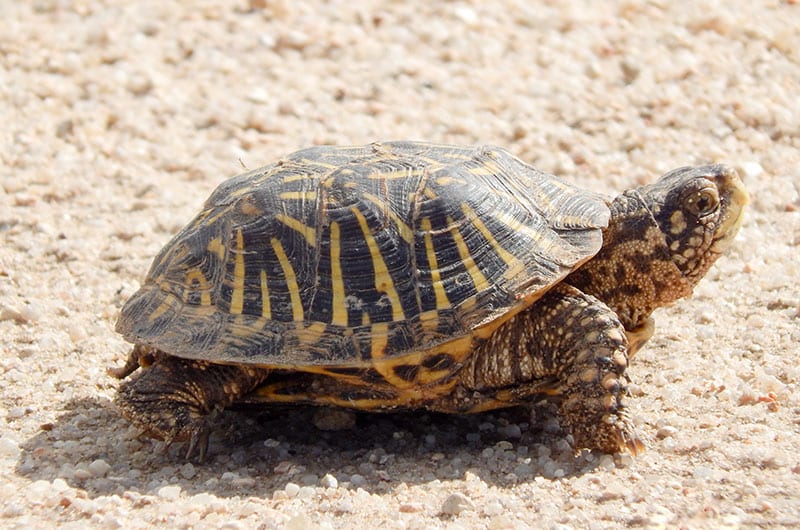 Ornate box turtles can live between 30-40 years. You can determine the approximate age of turtles by counting the number of growth lines on the underside of the shell.

The ornate box turtle is a terrestrial turtle, approximately 4-5 in/10-12 cm, with a brownish shell and yellow radiating lines above and below. Skin is dark brown to reddish-brown with conspicuous yellow to orange spotting. Females grow larger than males. Males have red eyes and bright yellow spots on front legs, and females have yellowish-brown eyes. Box turtles are omnivores, feeding on primarily insects, as well as plants materials (prickly pear pads and fruits), and scavenging on carrion.

Ornate box turtles are found in open grasslands, sandy plains, agricultural land, glades and gently rolling hills from southern Wisconsin and northern Indiana through the central Great Plains. These turtles spend much of their time in small underground burrows, especially during warm parts of the day. Box turtles generally hibernate from late October to mid-April. After recent rain, ornate box turtles may emerge to find food. Look out for them on roads and be careful not to run them over.

Ornate box turtles can live between 30-40 years. You can determine the approximate age of turtles by counting the number of growth lines on the underside of the shell.

Box turtles are not dependent on free water, so can occupy a wide range of habitats including pasture, fields, sandhills, prairie, and open woodland. They are most abundant in grasslands, with scattered brush vegetation and soils suitable for burrowing. Shrub cover between 20-60% is ideal, preferably dominated by sand sagebrush to provide cool areas during summer and hibernation sites in the winter. Grass cover below 40% with forb cover is preferred for foraging. Box turtles travel to deep sandy soils for hibernation in winter months. Box turtles tolerate intensive grazing and t changes to vegetation structure. Box turtles do not normally occupy dense woodlands, step, rocky, mountain slopes or elevations above 6,900 ft/2,100 m. Populations may be locally depleted by high mortality on roads. 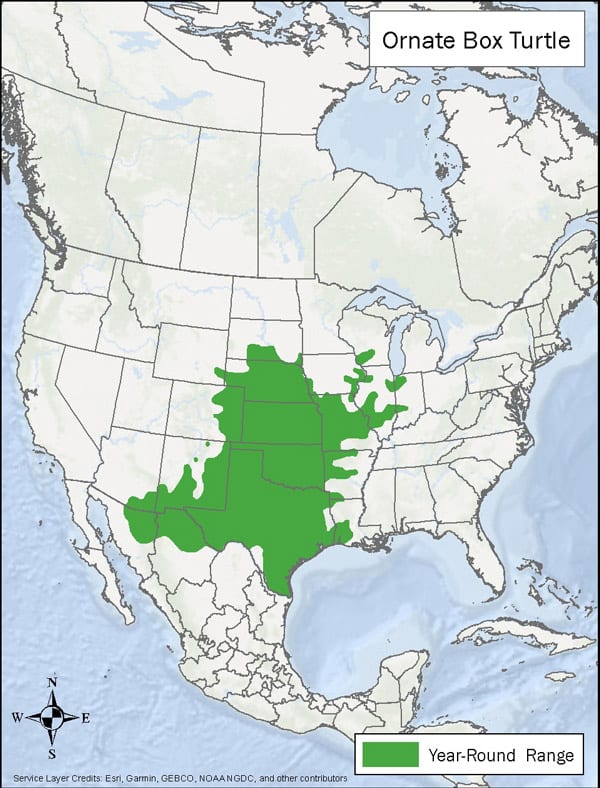 Develop and maintain grasslands that contain a diversity of native plant species and a mosaic of habitats with open areas intermixed with more dense cover. Road traffic is a significant cause of mortality, so careful sighting of new roads and watch out for the ornate box turtles when driving ranch roads to avoid crushing individuals.  In areas with extensive prescribed burning, conduct spring burns prior to March 5 and fall burns after November 15 when possible.

Avoid any loss of prairie habitats for the development of houses and cropland as the habitat becomes unsuitable for ornate box turtles and puts them more at risk of mortality on roads and from farm machinery. Be vigilant when driving in suitable habitat and move off paved roads when possible. As the species is slow to reach reproductive age and has a high mortality of juveniles, box turtle populations are slow to recover. Use minimal herbicide and insecticides treatments as they can reduce food plants and insect populations, both major food sources of ornate box turtles.