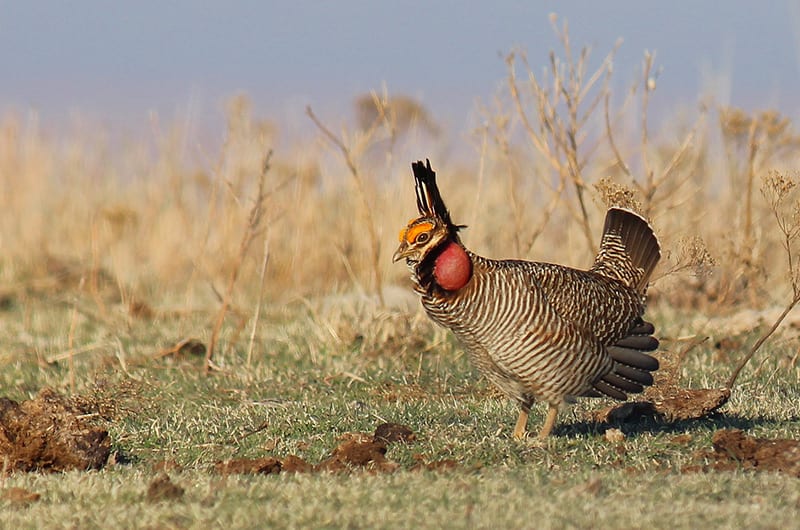 Lesser prairie-chickens are most easily observed in the spring when males gather on traditional breeding sites (also known as leks) to display and mate with females. Each male defends a small territory on the lek. They raise their ear pinnae (long neck feathers) and tails, stamp their feet, pop their air sacs, and lower their wings. They also cackle and beat their wings as they leap into the air to fight other males or impress females. Lesser prairie-chickens will also gather in larger flocks in the fall.

Leks may occur in idle agricultural fields, elevated knolls and ridges, or other areas with low-growing vegetation to increase visibility. In general, nesting habitat consists of 65% grass cover, 20-30% shrub cover, and 5-15% forb cover. Brood-rearing habitat typically has less grass with more shrub and forb cover for thermal protection and predator avoidance, some bare ground is also needed for chick mobility. Chicks eat a variety of insects, such as leafhoppers, beetles, and grasshoppers. Adults eat insects, sage and shinnery oak leaves, buds, and acorns, and some crops (corn, sorghum, alfalfa, and wheat). 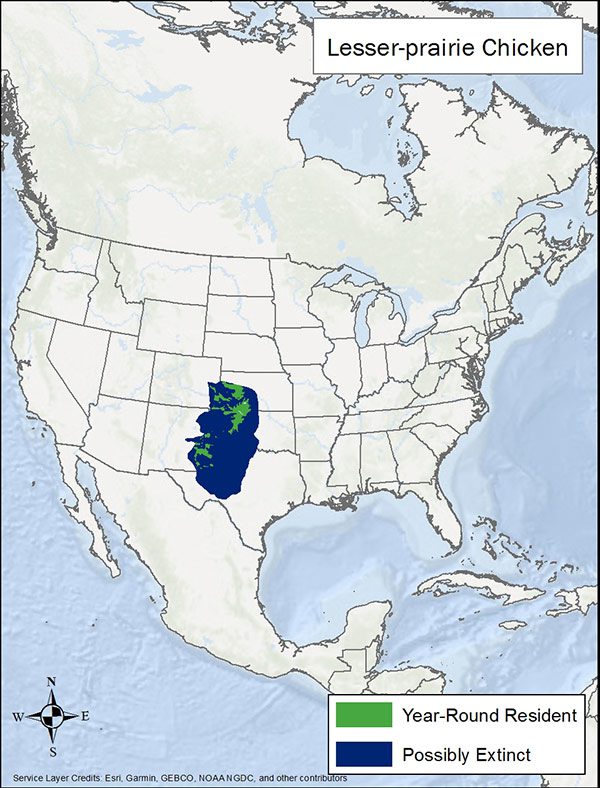 In general, promote approximately 1,280 ac/518 ha of nesting and brood-rearing habitat surrounded by 10,000 ac/4,047 ha of mostly intact habitat. If large stock tanks are used for livestock, wildlife escape ladders in the tanks can provide an escape route for birds and other wildlife that become trapped in the water. Mark fences with flagging or similar means to prevent prairie-chicken collisions. Grazing management plans should promote the diversity of habitats and necessary vegetation structure for nesting and brood-rearing periods. Because lesser prairie-chickens avoid habitat with trees, removing eastern red cedars and mesquite with mechanical methods or prescribed fire should increase use. Retiring agricultural fields to the Conservation Reserve Program will benefit lesser prairie-chickens by creating more grassland habitat.

BirdLife International and Handbook of the Birds of the World. 2019. Version 2019.1. Lesser prairie-chicken

The Cornell Lab of Ornithology, Birds of the World (Lesser prairie-chicken)

The Cornell Lab of Ornithology, All About Birds (Lesser prairie-chicken)