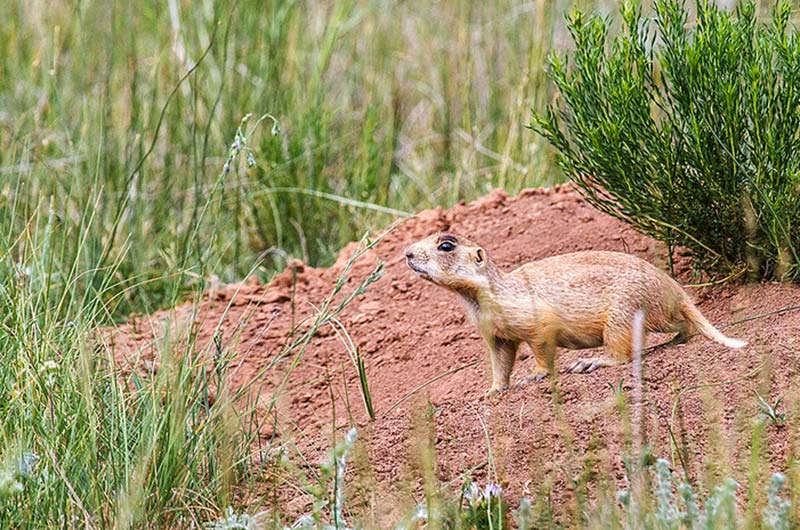 Utah prairie dogs are 12-14 in/30-36 cm long with coats that range from tawny to reddish-brown, dark spots above the eyes and a short, white-tipped tail. The Utah prairie dog is a federally Threatened species found only in the southwestern part of the state of Utah. Historically, its range included Pine and Buckskin valleys, north to Salina Canyon, south to Bryce Canyon National Park, and east to the foothills of the Aquarius Plateau. Today, its range is estimated to be only 18 square miles/28 square km and shrinking: only 10% of Utah prairie dog habitat is left. Populations now inhabit Bryce Canyon National Park, parts of the Awapa Plateau, Sevier River valleys, and small populations in mountain valleys. All populations occur between elevations of 5,000-9,000 ft/1,500-2,700 m.

Utah prairie dogs are active during the day, though they do spend much of their time in complex underground burrows. A “lookout” can be seen posted at burrow entrances. Population densities range from 1-47 per acre/0.4 to 19 per hectare. Similar to white-tailed prairie dogs, Utah prairie dogs hibernate in winter. They enter hibernation from mid-July to November and emerge from mid-March to April depending on elevation and age. 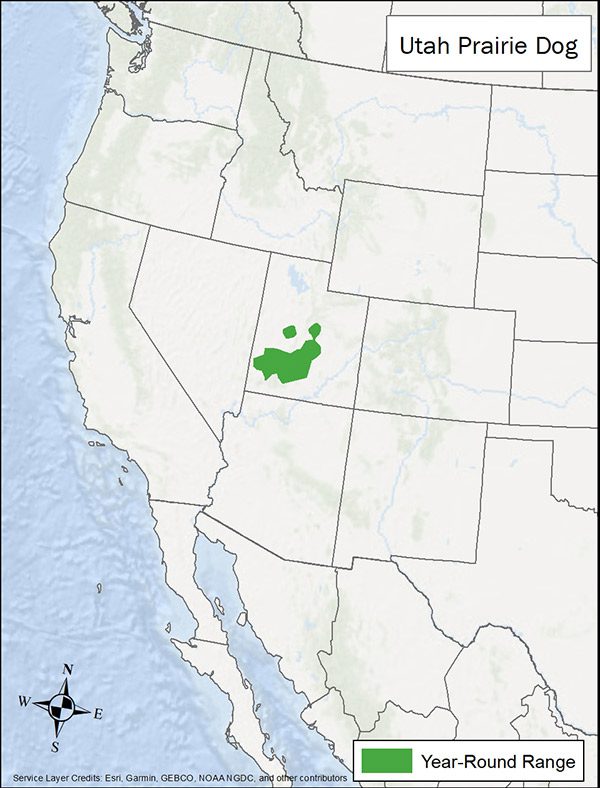 Although colonies exist on public land, 75% of Utah prairie dogs are on private lands, where they’re at risk of habitat loss and fragmentation from development. When at all possible, allow Utah prairie dogs to inhabit areas of private property. Maintain intact grasslands. Managed livestock grazing can be beneficial to Utah prairie dogs, as it maintains shorter vegetation, encourages grass growth, and can reduce shrub density. Tall, dense shrubs can be used to slow or restrict Utah prairie dog colony expansion into undesired areas. Control populations using an adaptive management approach and take advantage of state or federal incentives for maintaining prairie dogs on private land.

Avoid habitat loss to agriculture and residential development, and direct poisoning or shooting of Utah prairie dogs. Like other species of prairie dogs, plague has caused severe population declines. Habitat loss and fragmentation and grassland conversion to sagebrush continues to reduce habitat quantity and quality.

Utah prairie dogs are a keystone species, meaning they have a larger influence on their habitat than other species. Many species depend on them and their burrows, including burrowing owls and plovers. Utah prairie dogs are also prey for many species, including hawks, golden eagles, coyotes, badgers, and the federally endangered black-footed ferret.