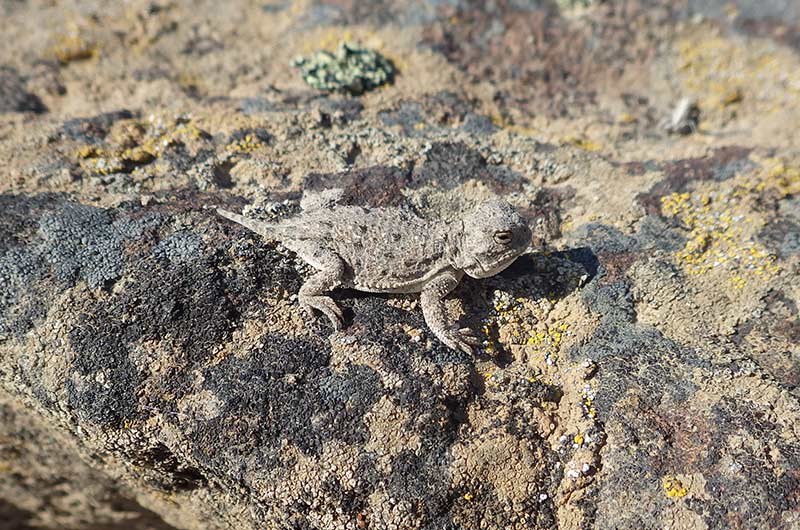 Pygmy short-horned lizards are small sized lizards ranging in length from 1-3 in/2.5-6.5 cm.  Females are typically larger than their male counterparts. They have flat, round abdomens, short legs, blunt snouts, and a flattened rectangular tail. Pygmy short-horned lizards can camouflage with their environment and usually blend to the color of the soil. Their backs can range in color anywhere from white, grey, tan, brown, black, yellow, and orange. The top of the back has small spikes that run from the head to the tail of the lizard. The sides of the back have dark brown or black spots and have several lines of relatively well spaced small spiky horns. The tail tends to have dark bands running along the edges.

Pygmy short-horned lizards can be found burrowing in loose sandy soils in-between rocky outcrops in a variety of ecosystem types in the Pacific Northwest. They can be found from elevations ranging from 1,000-7,200 ft/300-2,200 m. They are most active in spring and fall during the middle of the day. Due to high temperatures, adults are largely inactive in the summer.

Ideal habitat can be found in a variety of shrub-steppe ecological systems of the Pacific Northwest, including sagebrush desert, juniper-pinyon woodlands, and open coniferous forests. They typically burrow in sandy soils but are also found in rocky soils. Young pygmy short-horned lizards feed almost exclusively on ants, while ants account for approximately 72% of adult lizards’ diets. Other insects included in the adult diet include beetles, caterpillars, spiders, and sowbugs. They have relatively small home ranges around 1.2 acres/0.5 hectares in size. 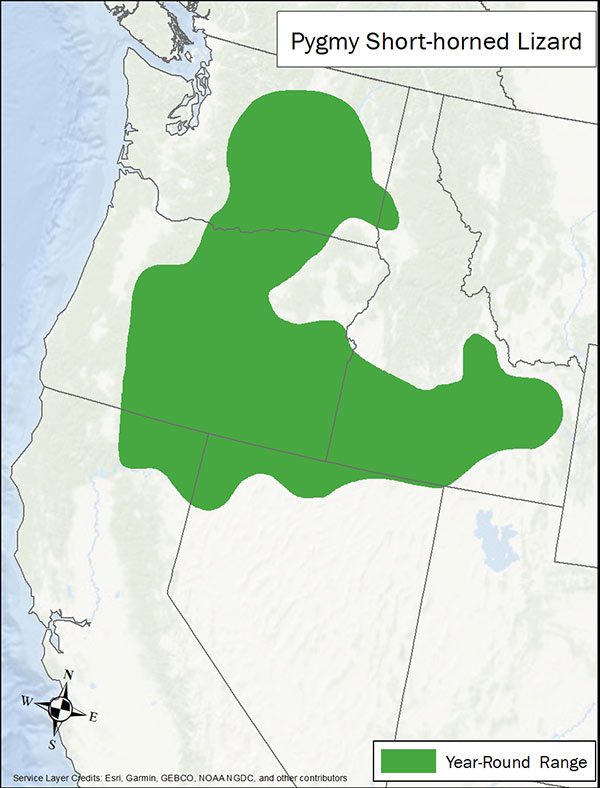 Maintain intact shrub-steppe for pygmy short-horned lizards. Because the lizards live in localized populations, habitat destruction can eliminate populations even from moderate habitat infringement. Pygmy short-horned lizards are impacted by climate change through increased temperatures, altered fire regimes, and the increasing prevalence of invasive species. The invasion of cheatgrass and other invasive species can limit mobility, and reduce suitable habitat. Weed control through traditional and chemical means should be used in affected areas.

Avoid conversion of this habitat for agricultural purposes. As the lizards almost exclusively feed on insects, Avoid using pesticides or insecticides near and in pygmy short-horned lizard habitat.

Other species that can benefit from similar management practices include the American badger, desert nightsnake, the Mormon medalmark, and the sage thrasher.