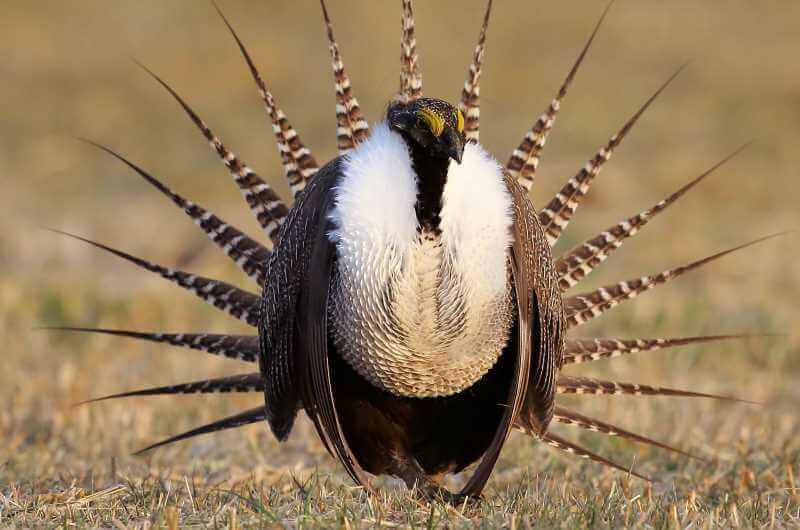 The Gunnison sage-grouse is smaller than the greater sage-grouse (2-5 lb/1-2.4 kg) and looks similar with a few exceptions: Gunnison sage-grouse males have longer, thicker feather plumes extending on the back of the neck (called filoplumes), and they have shorter, more distinctly banded tail feathers. Adult males are mostly brown with mottling on the back and wings, a pointed tail, a black belly, a white breast, and two yellow air sacs that inflate during the breeding display. Females are more cryptic and lack the conspicuous white breast, air sacs, and neck feathers.

Gunnison sage-grouse have a breeding display March-May where males gather on leks (i.e., breeding grounds) in the early morning to attract females. Leks are usually located in basins, on ridges, and in other open areas. Males strut with tails fanned, popping their inflated air sacs, and fighting each other for a chance to mate with the females. In the winter, they gather in large flocks, although the birds tend to segregate by sex throughout the year. Gunnison sage-grouse resides year-round, and may make seasonal movements between habitats used for breeding, nesting, and over-winter.

Gunnison sage-grouse use a variety of habitats during the year, mainly sagebrush shrublands, but also wet meadows, irrigated pastures, alfalfa fields, and greasewood bottoms when hens are raising chicks. They also use sagebrush adjacent to pinyon-juniper and aspen stands and mountain shrub communities composed of sagebrush, Gambel oak, serviceberry, and snowberry. They nest on the ground, usually under a sagebrush shrub, in areas of 10–25% sagebrush canopy cover that are 10-20 in/25–50 cm tall, with 10–40% perennial grass cover that is 4-6 in/10-15 cm tall, and 5–40% forb cover. They winter in areas with >25% sagebrush canopy cover with shrubs that are >16 in/40 cm tall, often on south and west-facing slopes and ridgetops. In summer, they eat mostly insects and also sagebrush shoots, buds, and flowers. In winter, they eat sagebrush leaves almost exclusively. 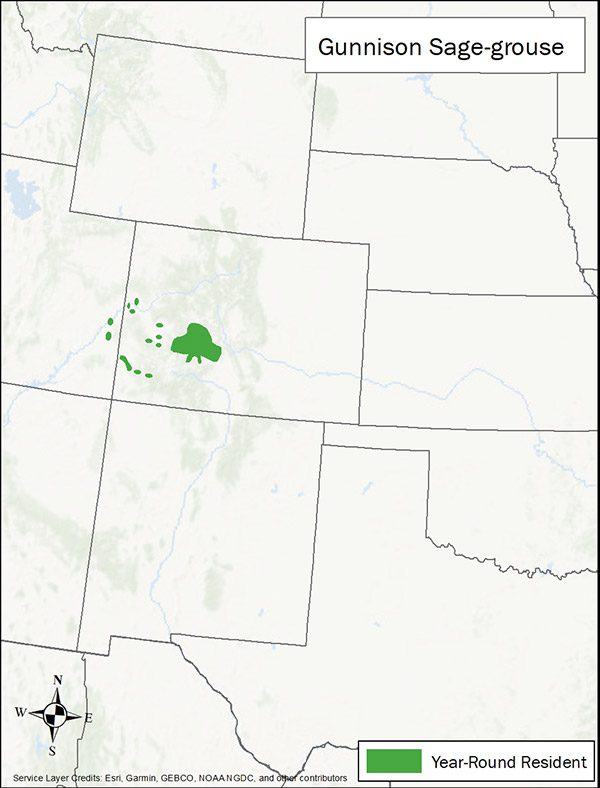 If large stock tanks are used for livestock, wildlife escape ladders can provide an escape route. Minimize disruption to breeding by adjusting the timing of energy-related activities. Energy-related infrastructure should be located >2 mi/3.2 km from leks, whenever possible. Human activities within 0.3 mi/0.5 km from leks should be minimized during the early morning and late evening when birds are near or on leks.

BirdLife International and Handbook of the Birds of the World. 2019. Bird species distribution maps of the world. Version 2019.1. Gunnison sage-grouse

The Cornell Lab of Ornithology. All About Birds Gunnison sage-grouse

Consult with your state wildlife agency about grouse population management.