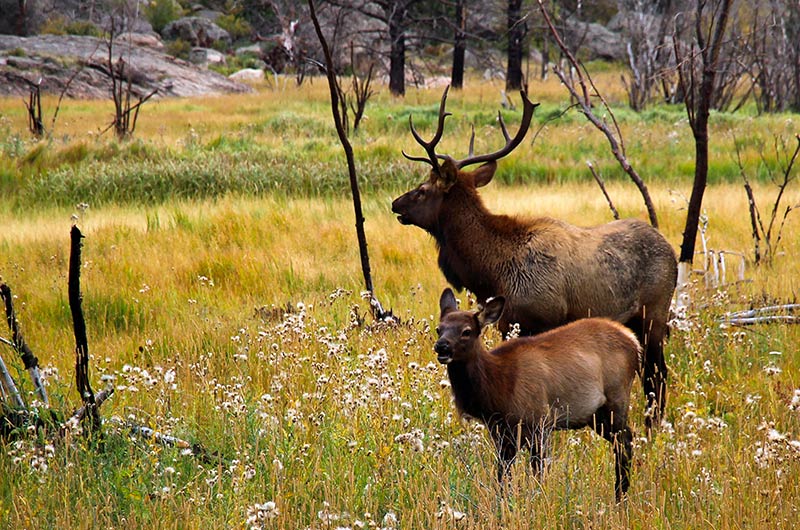 At one time, elk were the most widely distributed member of the deer family in North America, found from the Atlantic to the Pacific coasts, and from Mexico to northern Alberta, once numbering 10 million individuals. In the early 1900s they numbered just 100,000.

Elk are light brown, with dark brown shaggy manes (especially in winter) and yellowish, light-colored rumps. Calves have a light brown coat with white spots. Most adult elk stand at 4.5-5 ft/1.3-1.5 m tall at the shoulder, with males weighing 600-900 lb/272-408 kg and females weighing 450-600 lb/204-272 kg. Males have large, branching antlers that can grow up to 5 ft/1.5 m tall and 6 ft/2 m wide. Males shed their antlers in March or April and begin to grow a new set soon after shedding. While elk are found in North America and Eurasia, this factsheet only covers the North American subspecies. There are four subspecies of elk in North America: Tule elk, Roosevelt elk, Manitoba elk, and Rocky Mountain elk. Tule elk are the smallest subspecies, weighing approximately half as much as other elk subspecies, and are found only in California. Manitoba elk are large and found only in Manitoba and Saskatchewan. Roosevelt elk are found from northern California through Oregon, Washington, and into British Columbia. Rocky Mountain elk are a lighter color, a bit smaller, and have more slender antlers than the Roosevelt elk. Rocky Mountain elk are found in the Rocky Mountains, from New Mexico into Canada, with reintroduced scattered populations east of the Rocky Mountains.

Elk are active at night and most active at dawn and dusk. In mountainous areas, elk usually spend the spring and summer at higher elevations. Elk mate in the fall. Often, a large group of females, called a harem, can be found with one male. Males will bugle using special incisors and spar for female attention. When the mating season is over, elk congregate in single-sex herds and migrate to their winter range. Some elk herds use the same migratory route every year. Some herds do not migrate.

At one time, elk were the most widely distributed member of the deer family in North America, found from the Atlantic to the Pacific coasts, and from Mexico to northern Alberta, once numbering 10 million individuals. In the early 1900s they numbered just 100,000.

Elk inhabit a wide range of habitats, from open areas such as marshy meadows, grasslands, river flats, and aspen parkland, to coniferous forests, brushy clear cuts, or forest edges, and semi-desert areas. In the spring and summer, elk in the mountains prefer high country meadows and woodlands. In the fall and winter, they move to valleys and lower elevations with a combination of woodlands, grasslands, and large, open areas. As elk are wide-ranging, they often live and move through public and private land. Migration corridors that cross more populated mid-elevations are a limiting factor and present management challenges. Elk graze on grass and flowering plants in the summer, as well as shrubs, aspens, and willows in the winter. They will also sometimes feed on agricultural crops, especially hay fields. 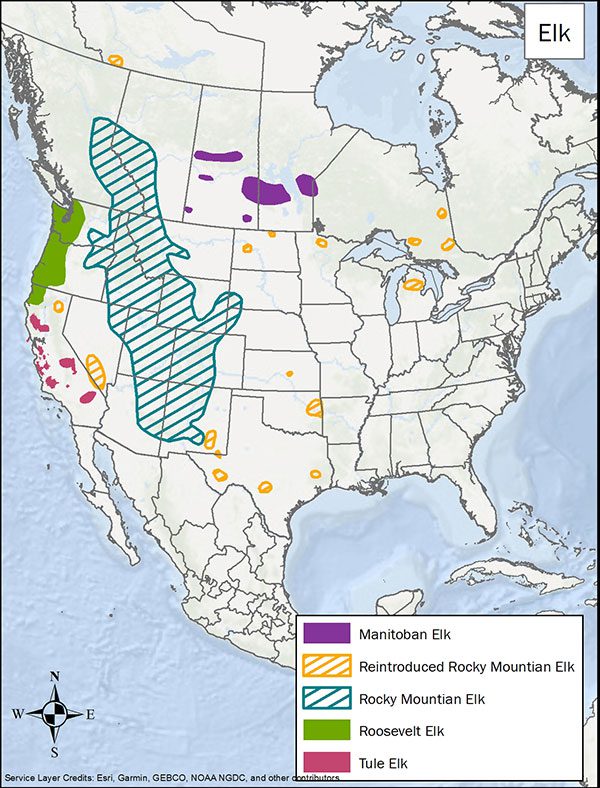 Range map provided by International Union for Conservation of Nature and subspecies adapted from Bryant and Maser, 1982. Note: Only showing North American range.

Managers can improve and maintain open areas for elk by controlling invasive weeds, conducting prescribed burns, and selectively harvesting timber. In addition, management that promotes connectivity between high-quality habitat areas and winter ranges is also beneficial. As elk can damage traditional livestock fencing, installing wildlife-friendly fencing specific for elk can allow movement and reduce fencing repair costs. Collaborative management of elk can promote habitat connectivity and population size to meet shared goals. In areas where cattle and elk coexist, rotational grazing can be beneficial, and planning for elk grazing pressure is critical when developing a livestock grazing management plan. Hunting revenue can be an important economic resource to landowners. However, a high density of elk can result in disease spread, including brucellosis. In these cases, hunting and disturbance can assist in managing and mobilize elk populations.

Avoid intensive development, fragmentation, or conversion of elk winter range and migration corridors, as this often leads to increased human-elk conflicts and further concentrates elk in the remaining habitat. Avoid installing incompatible fencing such as 4-wire barbed wire or woven mesh in areas of frequent elk crossing as calves may have difficulty getting through and become entangled.

Management for elk often benefits native vegetation and other species that utilize and travel through the same habitats, such as deer, coyotes, mountain lions, and moose.

Consult with your state wildlife agency about hunting and elk population management.