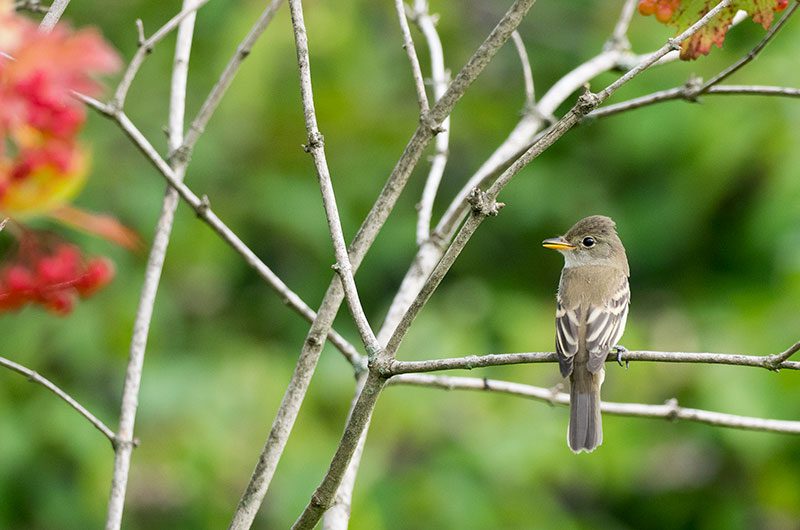 Willow flycatchers closely resemble alder flycatchers, which also breed in wet, shrubby habitats further north. The two species are mainly identified in the field by their different songs. Until 1973, these two birds were considered the same species, Traill’s flycatcher, the scientific name for willow flycatcher.

The willow flycatcher is a small, drab brownish-olive flycatcher, about 5.1-6.7 in/13-17 cm long. They have a relatively long tail and wings with two white wingbars, a faint to absent eyering, a white throat, and a dull olive to brownish breast. There are four recognized subspecies of willow flycatcher; the southwestern subspecies are federally Endangered and is virtually indistinguishable from other willow flycatchers by sight.

Willow flycatchers closely resemble alder flycatchers, which also breed in wet, shrubby habitats further north. The two species are mainly identified in the field by their different songs. Until 1973, these two birds were considered the same species, Traill’s flycatcher, the scientific name for willow flycatcher.

Willow flycatchers breed in a variety of shrubby habitats (>5% shrub cover, often willow species) near standing or running water throughout western U.S. and Canada, including beaver meadows, along forest clearings, and in brushy lowlands, foothills, open valleys, and mountain parks. In the Pacific Northwest, they also use more arid scrubby areas, mature forests, aspen parklands, woodlands near farmland, and in clear-cuts in early successional forests. In central and eastern U.S., they breed in both wetland and dry, upland areas, such as riparian streams, prairie coulees, and woodland edges. Southwestern willow flycatchers breed in relatively dense riparian forest and shrub communities composed of native and exotic vegetation, such as willows, seepwillow, box elder, buttonbush, cottonwood, tamarisk, and Russian olive.

Willow flycatchers usually place nests in willows or other shrubs and trees near the ground and within the perimeter of the shrub thicket.  During migration, willow flycatchers use similar wet, shrubby habitats with willow, cottonwood, and Russian olive, and also use adjacent crop fields. 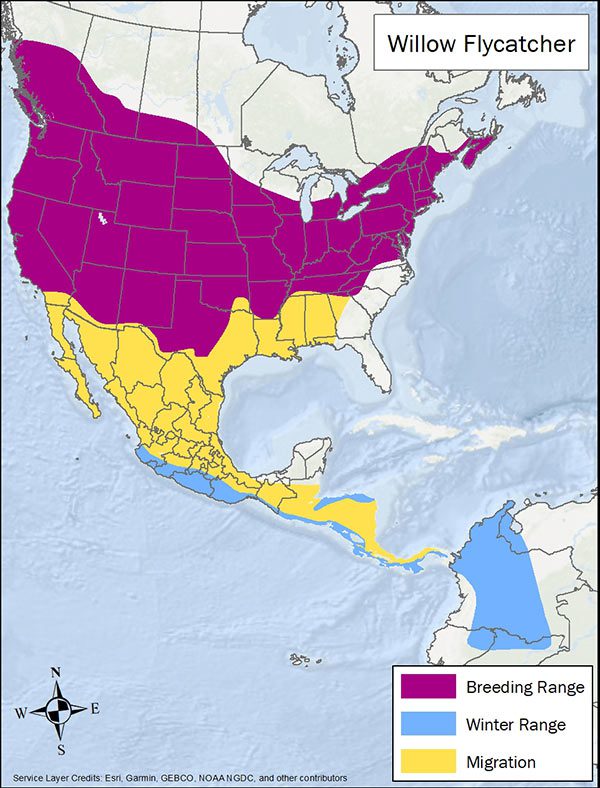 Maintain riparian vegetation (including exotic trees and shrubs like tamarisk if no native shrubs are available) along streams, rivers, beaver ponds, wet meadows, and other standing or moving water sources. Minimize disturbance to riparian vegetation during the nesting season (May-July). Reduce the impact of herbivory and trampling in riparian areas from livestock through riparian pasture fencing. Rotational grazing benefits many riparian species. Discourage brown-headed cowbird populations by keeping livestock dispersed or moving and periodically rest grazing units for at least a year to allow local southwestern willow flycatcher populations to develop without cowbird pressure.

Avoid removing riparian habitat, especially in the western U.S., through activities such as channelization, dam construction, groundwater pumping, recreational development, and heavy season-long grazing. These activities have been particularly detrimental to the southwestern willow flycatcher. Grazing in riparian areas may also compact soil and create gullies, which can dry out wet meadows and can also disturb nesting flycatchers. Avoid the use of pesticides where possible as they reduce insect supply for flycatchers.

Other species that may benefit from habitat management for willow flycatchers include beavers, dusky flycatchers, and alder flycatchers.

BirdLife International and Handbook of the Birds of the World. 2019. Bird species distribution maps of the world. Version 2019.1. Willow flycatcher

The Cornell Lab of Ornithology, Birds of the World Willow Flycatcher

The Cornell Lab of Ornithology. All About Birds Willow Flycatcher