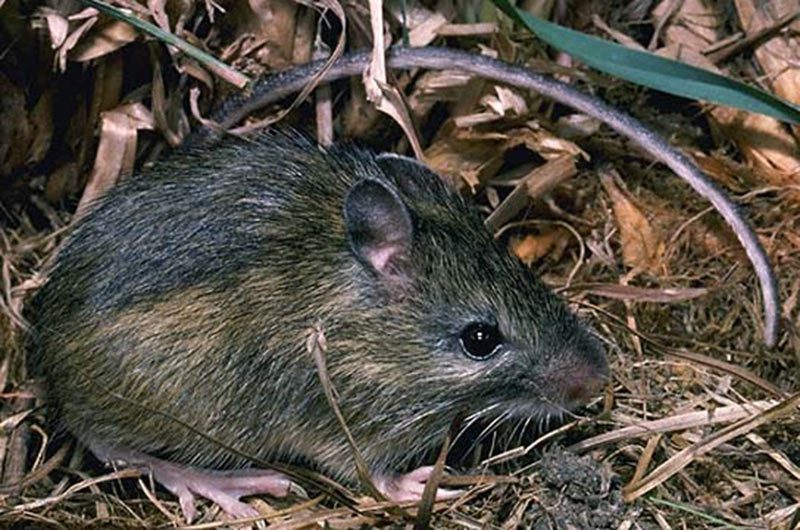 When western jumping mice emerge from hibernation in late spring or early summer, they have lost 18% of their body weight from the previous year. Adults quickly build up their fat reserves of up to 2/3 of their body weight to survive the long winter underground without food stores.

The western jumping mouse is a common mouse in western Canada and the United States. In the United States, the species ranges from Montana and northern New Mexico to Washington and California. The western jumping mouse is 11 in/26 cm long (including the tail) and weighs 1.3 lbs/38 g. They are identified by their large hind feet and long, thin tail. Their coat is dark brown along the spine, yellowish-brown along the sides, and white underneath. They are nocturnal and spend much of their lives in hibernation, emerging only for the summer months from mid-May to late June or July, depending on elevation. During summer they breed and build up fat stores before returning to hibernation in September or October.

Since they are not active during the daytime and spend much of the year in hibernation, it may be difficult to spot a western jumping mouse. Look for them in the mountains on summer nights near streams with tall grasses. If startled, they use their large feet to jump great distances, which may make them more visible.

When western jumping mice emerge from hibernation in late spring or early summer, they have lost 18% of their body weight from the previous year. Adults quickly build up their fat reserves of up to 2/3 of their body weight to survive the long winter underground without food stores.

The western jumping mouse prefers being near water, including springs and streams. Ideal habitat includes riparian, herbaceous wetlands, grasslands, mountain meadows, and marshes. However, their habitat is more likely to be dependent on the quality and type of vegetation rather than proximity to water, as they rely on dense (>25% herbaceous cover), tall grasses (9-13 in/24-35 cm) for cover. Jumping mice build nests in burrows in well-drained soil at least 20 in/20 cm deep or among vegetation, often along streams or in elevated banks. Depending on the time of year and availability, western jumping mice eat insects, grass and forb seeds, and the stems and leaves of herbaceous plants. 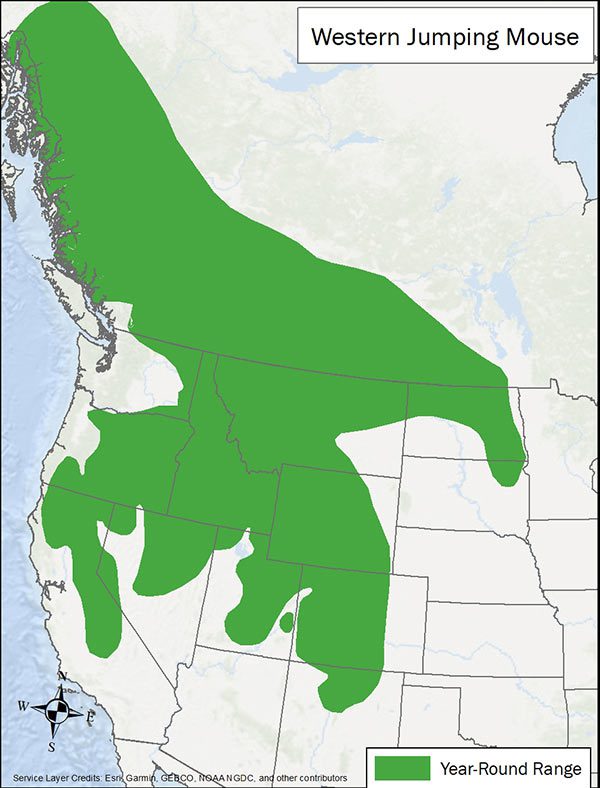 Western jumping mice populations are stable across their range. Yet local populations are threatened by the loss of habitat due to development and agriculture expansion. Maintaining tall dense vegetation provides cover and food for jumping mice. Riparian fencing to control the timing and amount of livestock grazing as well as seasonal grazing activities along riparian areas can help maintain jumping mouse habitat. Since continuous grazing can reduce the tall grasses and vegetation that western jumping mice rely on, rotational grazing can allow some areas to maintain a diversity of tall, dense vegetation for jumping mouse cover and hibernation habitat.

Avoid extensive controlled burns in large areas of western jumping mouse habitat to preserve areas of dense vegetation and litter, which is used for hiding.  Avoid using poisons to control rodents, as this can accidentally impact other species, such as weasels and owls that prey on the mice.

Other species that share the western jumping mouse habitat include the common deer mouse, various voles and shrews, ground squirrels, and chipmunks. They are prey for weasels, foxes, coyotes, owls, and snakes.