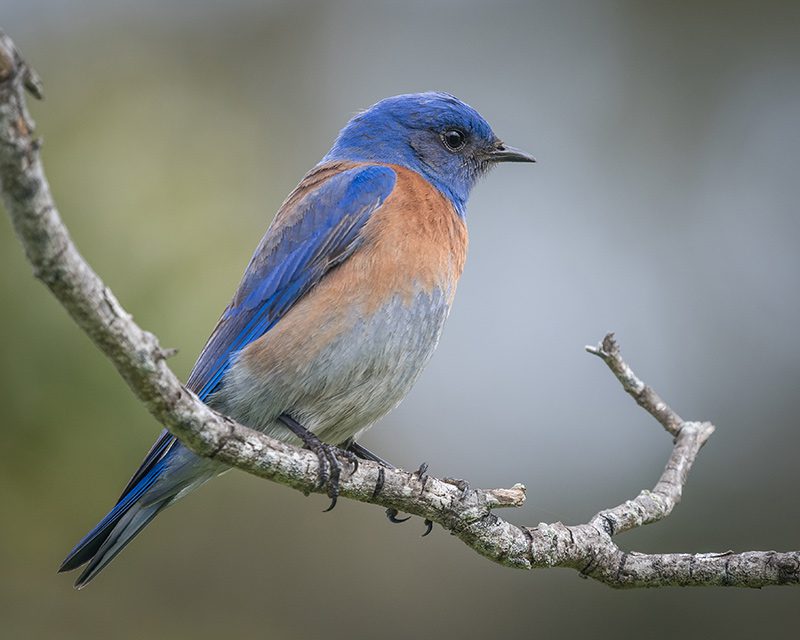 Although western bluebirds form a monogamous pair during the breeding season, many bluebird nests contain young that the resident male did not father. A pair of western bluebirds may also have helpers at the nest, who are thought to be assisting their supposed parents after their nests have failed.

The western bluebird is a small member of the thrush family (smaller than a robin; 6.5-7.5 in/16.5-19 cm in length). Males have a brilliant blue head, wings, and tail with a rusty breast and back. Females are duller overall with some blue in the wings and tail and more gray and brown coloring. 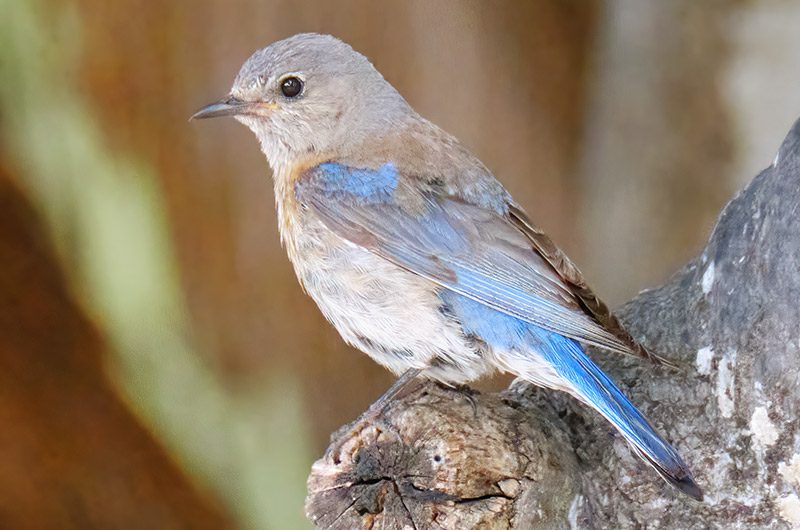 Western bluebirds can be found in open woodlands and woodland edges of clearings throughout the western U.S., central Mexico, and southwestern Canada. Look for them sitting low on a tree branch or a fencepost or watch them drop to the ground to feed on insects. Their songs are typically a series of kew call notes strung together. While breeding, western bluebirds are often seen with their mate, but during the winter, they often gather in same sex or mixed flocks to feed on insects or berries. More northern or high-elevation populations will migrate south or to lower elevations in the winter.

Although western bluebirds form a monogamous pair during the breeding season, many bluebird nests contain young that the resident male did not father. A pair of western bluebirds may also have helpers at the nest, who are thought to be assisting their supposed parents after their nests have failed.

Western bluebirds breed in open woodlands (1-20% canopy cover) and at the edges of woodlands, such as near a burned or logged area. However, they are much less likely to be found in large meadows compared to eastern or mountain bluebirds. They use both coniferous and deciduous woodlands, especially ponderosa pine and aspen stands, but also pinyon-juniper and mixed conifer woodlands. Standing snags are an important component of their breeding habitat as they use dead trees for nesting and perching to feed; therefore, western bluebirds are more common in moderately disturbed areas, such as burned or logged forests. Western bluebirds nest in cavities formed naturally or created by woodpeckers, and will also use artificial nest boxes. In the winter, they use similar habitats to the breeding season and also mesquite stands, oak and riparian woodlands, and coastal chaparral. 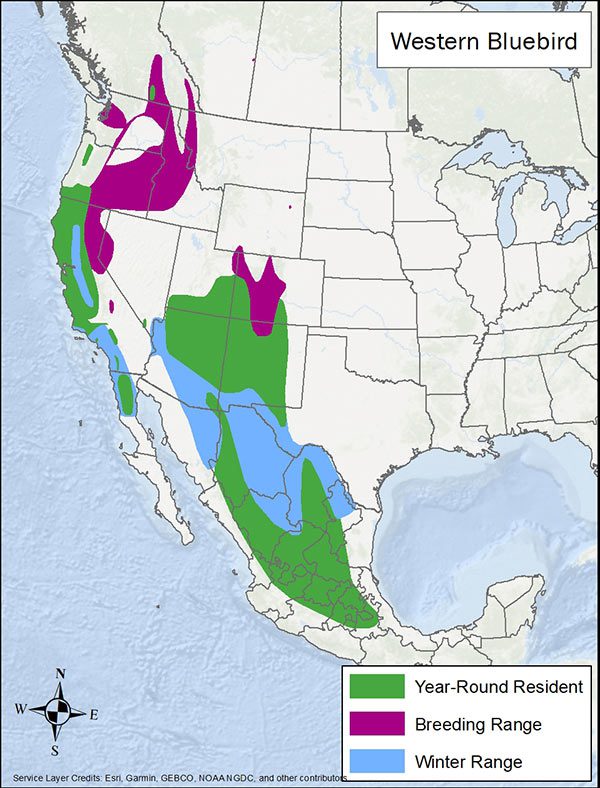 Maintain intact open woodlands. To promote habitat for western bluebirds, leave snags and dying trees for foraging perches and nesting sites, especially those that already contain cavities. Use thinning and prescribed burning to convert dense forest into more open woodland while retaining large trees and snags. Retain fruiting shrubs, such as currants and elderberries. Install nest boxes with floor dimensions of 5 in x 5 in/13 cm x 13 cm and an entrance hole 1.5 in/4 cm in diameter, 6-10 in/15-25 cm above the floor. Mount the boxes 4-6 ft/1.2-1.8 m above the ground on a post. Mount them at least 0.25 mi/400 m from buildings to reduce competition with the non-native house sparrow.

Avoid fire suppression and other activities that promote woodlands becoming too dense. Avoid the use of insecticides in nesting or foraging areas, especially during the breeding season. Avoid removing dead standing trees following a fire or other disturbance.

Other species that may benefit from habitat management for western bluebirds include black-throated gray warblers, Townsend’s solitaires, and mountain bluebirds.

BirdLife International and Handbook of the Birds of the World.2019. Bird species distribution maps of the world. Version 2019.1. Western Bluebird

The Cornell Lab of Ornithology, Birds of the World Western Bluebird

The Cornell Lab of Ornithology. All About Birds Western Bluebird