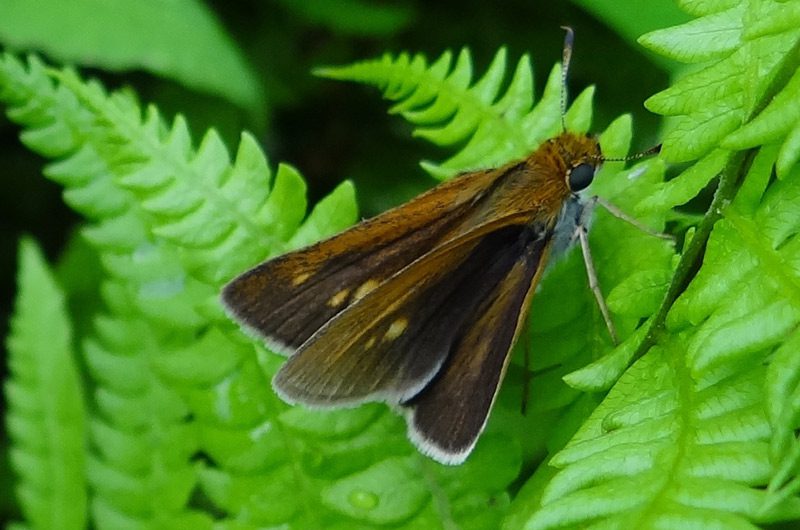 The two-spotted skipper is a small orange and brown butterfly with pointed forewings with white fringe. They have a white underbelly and under the head, while the top of the body is dark brown. The male’s forewing has a yellow-orange patch, and the female’s forewing has two pale yellow-orange spots. The two-spotted skipper has a wingspan of 1.26-1.65 in/3.2-4.2 cm. This butterfly has a distinct white line on the hindwing parallel to the body.  The larvae or caterpillars are pale green with dark markings on their yellow head and a dark dorsal stripe. The caterpillars eat leaves and live in nests of rolled leaves.

The two-spotted skipper has a wide range throughout North America and can be found from New England and Ontario to the Carolinas, and west to Wisconsin, Iowa, and Nebraska, while considered rare in adjacent states such as Colorado. The skipper usually emerges around late June into mid-July. Males can be found perching within 3 ft/0.9 m of the ground in sedge marshes to watch for females.

The two-spotted skipper often prefers moist environments and wetlands such as marshes, bogs, wet streamsides, and wet sedge meadows. They are found in open, sunny savannas with relatively short (<12 in/30 cm tall) vegetation and prefers the wettest part of pine savannas. The two-spotted skipper feeds on the nectar of flowers, especially pickerelweed, sweet pepperbush, blue flag iris, common milkweed, and spiraea, and hairy-fruit sedge. Hairy-fruit sedge is the main food source for caterpillars and the host plant where the skipper lays their eggs. This plant is not found in the western part of the butterfly’s range, so it is unknown what sedge species the caterpillar feeds on in Nebraska and Colorado. 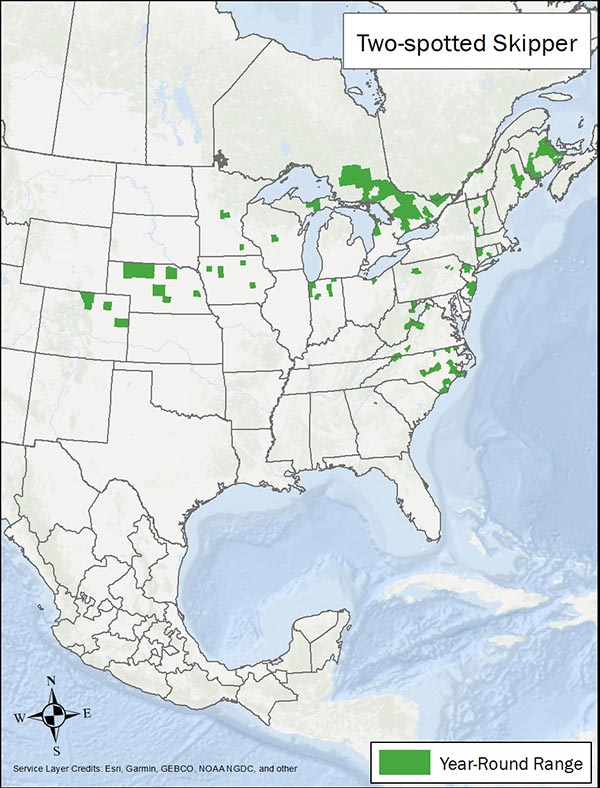 Management for the two-spotted skipper will also benefit many other species of prairie butterflies and skipper species as well as other wetland species.