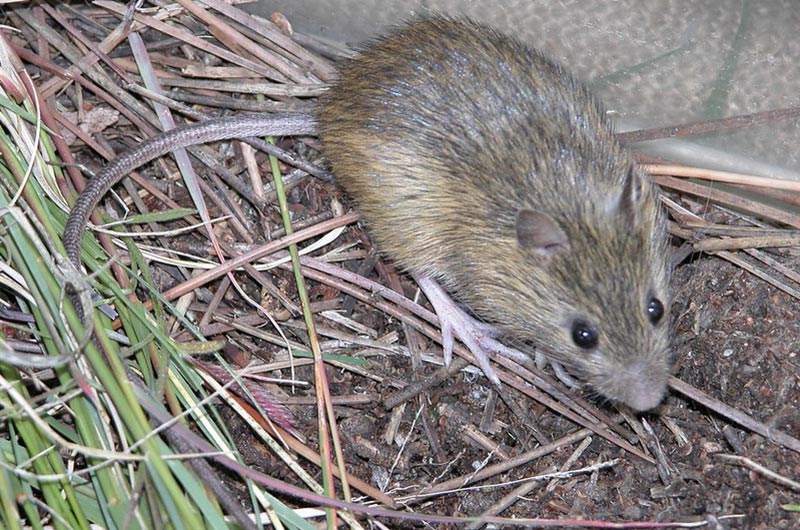 The Preble’s jumping mouse has large back feet and legs and can jump up to 3 ft/1 m in a single leap. However, jumping is reserved for extraordinary circumstances and stress. They generally move about by walking or by taking very small hops. This species can also swim.

Preble’s meadow jumping mouse is found only on the western edge of the prairie to the foothills of the Front Range, from southeastern Wyoming to north-central Colorado. Historically, the range included riparian areas farther into the prairie of northeastern Colorado. Preble’s jumping mouse is found at 4,600-8,000 ft/1,400-2,438 m in elevation and in dense riparian vegetation. Adults are 9 in/23 cm long including the tail, which is a little more than half their total length. Their coat is brownish with gray and yellow tones along the sides, a dark stripe down the middle of the back, and white belly. They have large back feet and legs, which they use to jump great distances. Their diet includes a variety of insects, plants, and seeds, which help them gain weight for a long hibernation. Preble’s meadow jumping mice are listed as a federally Threatened species.

Preble’s jumping mouse is mostly active from dusk to dawn. During the day, they sleep in raised nests of grasses and other vegetation. Often, these day nests are hidden under shrubs near streams with heavy grass cover. They hibernate for much of the year, from as early as late August to mid-May. Hibernation burrows are in areas with little flood risk. Females give birth to 2-3 litters per year in underground burrows between July and August. Litter sizes are 2-9 young, though annual survival rates are less than 10%.

The Preble’s jumping mouse has large back feet and legs and can jump up to 3 ft/1 m in a single leap. However, jumping is reserved for extraordinary circumstances and stress. They generally move about by walking or by taking very small hops. This species can also swim.

Ideal Preble’s jumping mouse habitat is very dense riparian shrubland and herbaceous wetlands, usually within 1,150 ft/350 m of water. They prefer areas with high plant species diversity, such as a combination of at least 20 species of grass, shrubs, forbs, and sparse trees. This diversity creates a multi-storied cover including a shrub canopy and an understory of dense grasses and forbs (>80% herbaceous cover). Canopy height should be at least 20 in/50 cm. Preble’s jumping mice will also forage in the adjacent floodplain and upland grassland habitats and use these areas to seek safety from flooding and to hibernate. 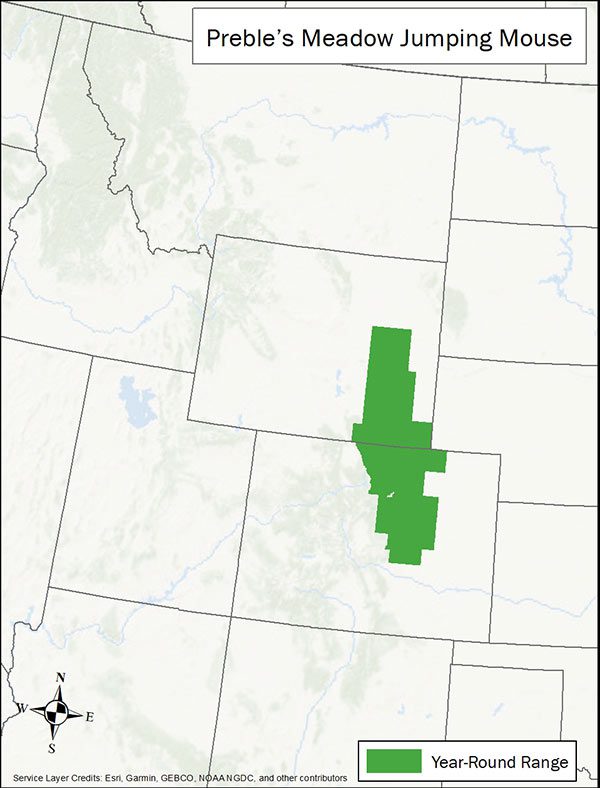 Range map provided by Internation Union for Conservation of Nature

Protect critical riparian habitat where Preble’s jumping mouse is found. Ideally, extend protections beyond the 100-year floodplain to provide intact adjacent uplands. Minimize disturbance to their habitat and restore habitat that has already been degraded or fragmented. Restoration efforts should focus on the natural water regime in the area and controlling erosion to sustain herbaceous cover. Certain grazing activities can be beneficial for Preble’s jumping mouse if riparian habitat and plant species diversity are protected, especially during the growing season. Riparian fencing with water gaps can allow managers to control the amount and timing of grazing while allowing livestock access to water. Control nonnative species, especially domestic predators such as cats.

Preble’s jumping mouse is threatened by habitat destruction, degradation, and fragmentation from development (mining and agriculture), heavy grazing (especially during the summer), and invasive species. Prevent development in riparian habitats within their range. Avoid land use activities that reduce grass and shrub cover, such as heavy season-long grazing. Limit new roads which fragment their habitat and inhibit dispersal. Avoid modifying landscapes to prevent flooding, do not drain wetlands or suppress fire, which can cause landscape changes that are unsuitable for Preble’s jumping mouse.