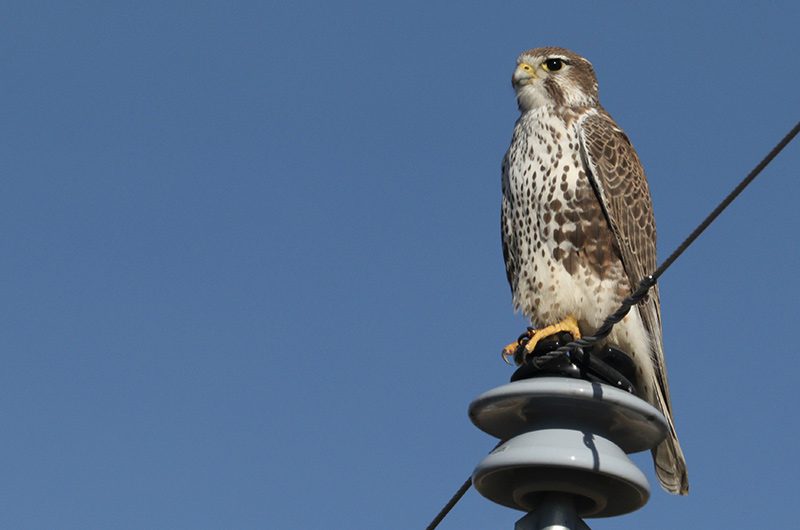 Prairie falcons are similar to other falcons such has peregrine falcons, and are large, pale and overall brown. They are about the size of a crow at 14-18 in/37-47 cm long. They have similar facial streaks as peregrines but lighter in color (brown back, white underparts). They nest on cliff edges.

Prairie falcons are found throughout the western U.S. Many are year-round residents and considered more of a “wanderer” than a true migrant. Seasonal movements reflect responses to changing food availability. Migration pattern is circular, with few individuals flying directly south to wintering areas. Most move north or east before heading south. Many individuals return to winter near their breeding areas. Look for these fairly large falcons in the open, treeless spaces of the West, where they can be dwarfed by the size of the landscape. Prairie falcons spend much of the day on the move. Watch for them cruising fairly low over the land rather than soaring high in the sky. It’s also worth scanning for low perched birds, sitting on fence posts and irrigation structures.

Prairie falcons inhabit open habitat at all elevations up to 10,990 ft/3,350 m, including shrub-steppe desert, grasslands, mixed shrub and grasslands, and alpine tundra. They occupy dry areas in the plains and steppes, wherever cliffs or bluffs are present for nesting sites. Foraging habitat is usually dominated by grasslands with dense cover, >80% and a low shrub component, <5%, but incorporates some shorter vegetation for locating prey (rodents). Nests are placed on cliff edges. 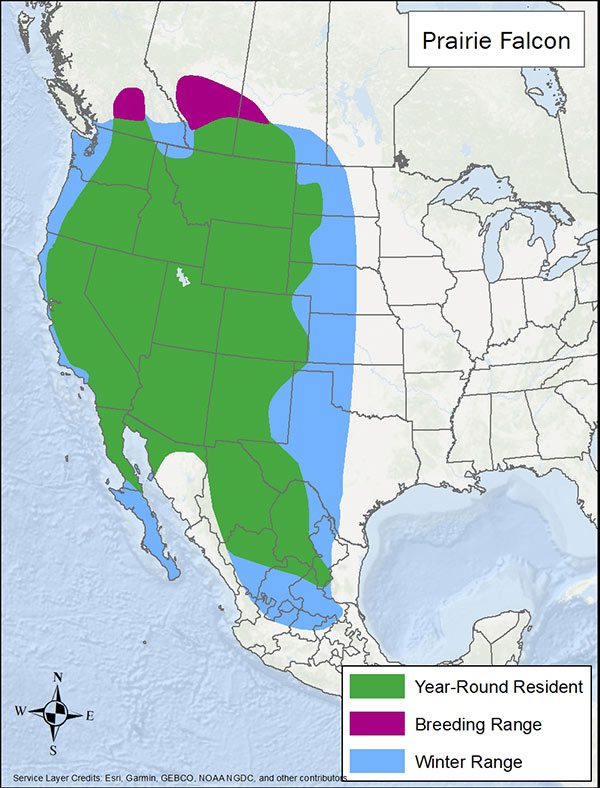 The primary activities to avoid are not management oriented, but more related to human activities. Avoid conversion of native grasslands to cropland and residential development. Avoid pesticides that can remove prey available for prairie falcons. Avoid disturbance to cliff areas where they nest.

Other wildlife that may benefit from habitat management for prairie falcons include golden eagles, ferruginous and Swainson’s hawks, pronghorn antelope and American kestrels

BirdLife International and Handbook of the Birds of the World. 2019. Bird species distribution maps of the world. Version 2019.1. Prairie Falcon

The Cornell Lab of Ornithology. Birds of the World (Prairie falcon).

The Cornell Lab of Ornithology. All About Birds (Prairie falcon).