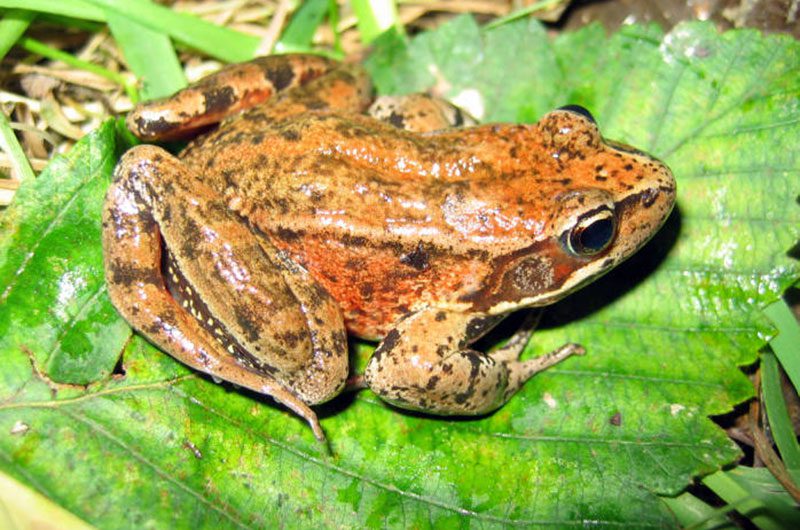 Northern red-legged frogs come back to the pond where they were tadpoles. Females even lay their eggs in the same location within the breeding pond each year.

Northern red-legged frogs are small, with males growing to 2 in/5-6 cm and females up to 4 in/10 cm from nose to vent.  They have brown, reddish-brown, olive, or greenish-gray smooth, moist skin with small, black spots on their backs, sides, and legs. Adult frogs have red coloration on the abdomen and undersides of arms and legs. Juveniles are not red and may have yellow on the underside of legs and in the groin. These frogs also have a light lip-line from eye to shoulder below a dark mask. Tadpoles are tan to dark brown with clumps of golden flecks.  Northern red-legged frogs are considered a Species of Special Concern in Canada.

Northern red-legged frogs are native to northern California, Oregon, Washington, and British Columbia. They are inactive if temperatures are too cold or too hot and dry.  Coastal populations may remain active year-round.  Northern red-legged frogs are found on several wildlife refuges in Oregon and Washington as well as Bureau of Land Management and U.S. Forest Service lands in the U.S. Adults are mainly nocturnal, while juveniles are active either day or night.

Northern red-legged frogs come back to the pond where they were tadpoles. Females even lay their eggs in the same location within the breeding pond each year.

Northern red-legged frogs use shallow ponds and wetlands with dense, emergent vegetation(>80% herbaceous vegetation cover).  For breeding, they use still and sunny water within forested areas. These areas can be permanent or seasonal as long as water remains for at least five months. Adults also utilize riparian areas and cool damp coniferous or deciduous forests during the nonbreeding season. They spent most of their time in small mammal burrows, moist sedge or brush, under logs and other forest debris, no more than 1 mi/1.6 km from water. Northern red-legged frog adults mainly eat beetles, caterpillars, and other small invertebrates.  Suitable habitat includes riparian corridors, wetlands, wetlands/upland mosaics with wetland patches. 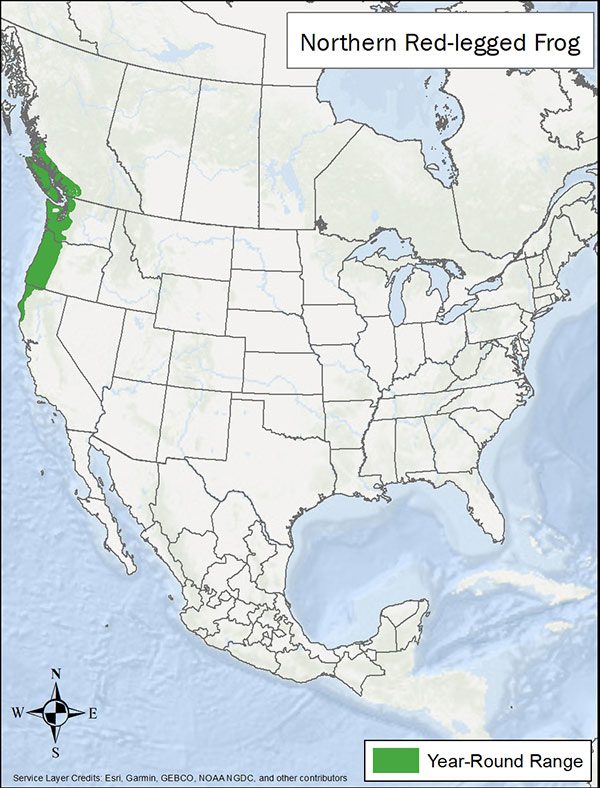 Maintain intact natural lands around northern red-legged frog breeding ponds and wetlands.  These areas will create a buffer and provide filtering for water pollutants, so less impact the breeding ponds.

Management for northern red-legged frogs will benefit other wetland species, including salamanders and other frogs.