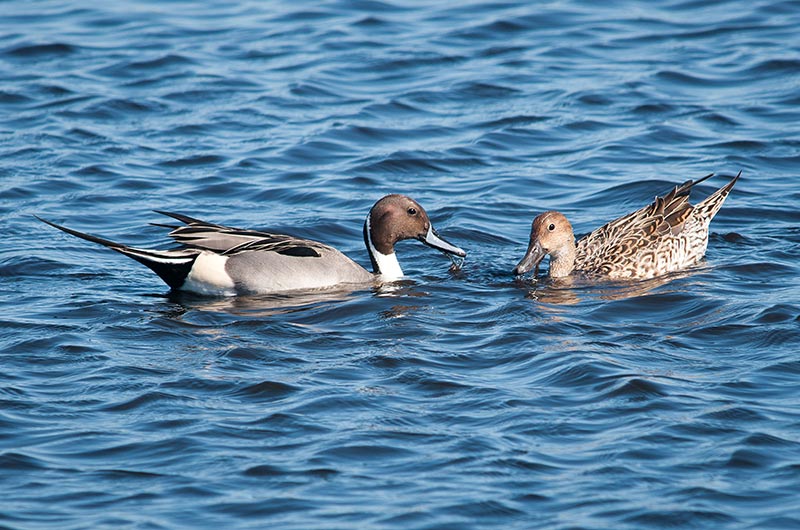 The Northern Pintail is a common dabbling duck that can be found in shallow lakes and wetlands throughout much of the United States. The male’s length is 25-29 in/ 64-74 cm and the female’s is 21-23 in/ 53–58 cm. They are often considered elegant in physique, with slender necks and long, pointed tails held high. This species, like many waterfowl, are dimorphic, meaning males and females are different in appearance. Males have a signature white stripe down their chocolate-colored necks, with a longer pointed tail, while females have intricate patterns all over.

Pintails are one of the first ducks to arrive on the breeding grounds in April and first to migrate south to wintering grounds in the southern United States, Mexico, and Central America, from September to November. In shallow wet areas and nearby agricultural fields, look for groups of ducks that stand taller than the rest. Their long necks and slender profile distinguish them from other ducks, as does the male’s brilliant white chest and stripe up the neck. They tend to forage in groups along the shallow edges of lakes and ponds, but they also venture out on the water with mallards, northern shovelers, other ducks, and American coots.

Pintails prefer open areas and small, shallow wetlands in areas with little rainfall. Common native plants in their breeding habitat include prairie grasses, spike rush, rushes, and buckbrush. In order to provide an abundant supply of high-energy and nutritional foods for pintails, wetland water depths should be <18 in/45 cm but preferably <6 in/15 cm for an abundant food source.

Pintails nest on the ground in grassy areas, including prairies, meadows, hay meadows, and agricultural lands surrounded by shallow ephemeral to semipermanent wetlands with emergent vegetation and low upland cover within 0.5-1.25mi/ 0.8-2 km. They prefer short vegetation in the landscape < 6 in/15 cm in height, with few forbs and <5% shrub cover. When conditions in winter breeding areas in south-central Canada and the Northern Great Plains of the United States are dry, fewer resources are available, and population recruitment in the spring may be lower. 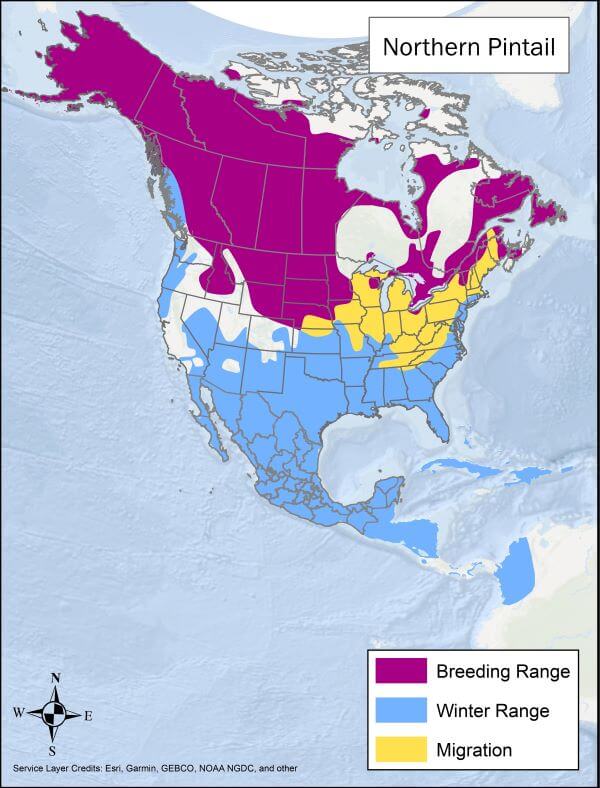 Other species that may benefit from habitat management for northern pintail include mallard, gadwall, and green-wing teal.

BirdLife International and Handbook of the Birds of the World. 2019. Bird species distribution maps of the world. Version 2019.1. Northern Pintail

The Cornell Lab of Ornithology, Birds of the World (Northern Pintail)

The Cornell Lab of Ornithology, All About Birds (Northern Pintail)