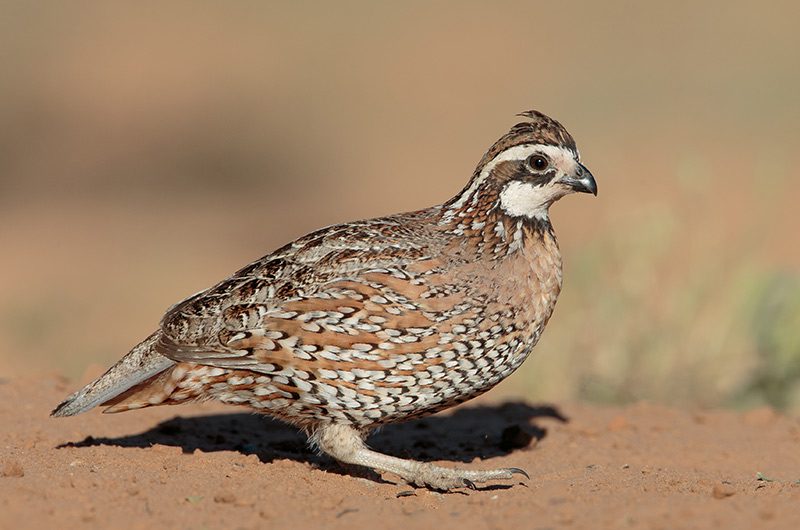 Northern bobwhites have a high annual mortality rate and short life spans. When weather and habitat conditions permit, however, they can compensate for this high mortality with increased chick production. An adult pair can successfully produce two or more broods (≥25 offspring) during a single breeding season.

The northern bobwhite quail is a small, chunky, short-winged gamebird, about 8 in/20 cm in length with a slight crest on its head. Males and females are chestnut brown above with brown and white scales underneath for males and buff-colored speckling underneath for females. Males have a bold black-and-white head pattern, while females have a buffy throat and eyebrow.

Northern bobwhites can be found from southern Maine and Ontario through the Great Plains and south to Florida, Central America and Cuba. Masked bobwhite is a subspecies found only in the Sonoran Desert and semi-desert of southern Arizona and Sonora Mexico. Females look very similar to males, but the males have a black head and throat and a rufous breast. 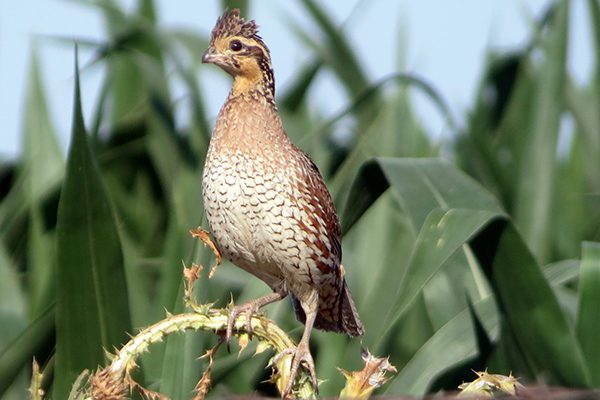 Northern bobwhites travel in groups called “coveys” most of the year, running across the ground from one shrubby patch to another. They explode into flight with quick wingbeats when flushed. In the spring, coveys break up as males whistle for females with their characteristic bob-White! Coveys reform in the fall. Northern bobwhites can be seen year-round. Masked bobwhites are typically difficult to find because the males infrequently call during the breeding season.

Northern bobwhites have a high annual mortality rate and short life spans. When weather and habitat conditions permit, however, they can compensate for this high mortality with increased chick production. An adult pair can successfully produce two or more broods (≥25 offspring) during a single breeding season.

In rangelands of the Great Plains, bobwhites are found in both early and later successional vegetation. In forests in eastern and southeastern United States, northern bobwhites prefer early successional vegetation with disturbances, such as fire, grazing, and timber harvest. The early successional habitat provides grass and forb cover for concealment and food, with openings for easy travel on the ground. A diversity of landcover types can support their habitat needs throughout the year, from active and fallow crop fields, pastures, native grasslands, hedgerows, brushy fencerows, and open woodlands.

Nesting bobwhites prefer native bunch grasses, 6-18 in/15-46 cm tall, to conceal their nests. During brood-rearing, bobwhite prefers a more open, recently disturbed habitat that may contain up to 70% bare ground so the chicks can easily move and feed along the ground. Bobwhite uses areas with more shrub and tree cover in the winter because the ground is protected from snow and the birds can find food. 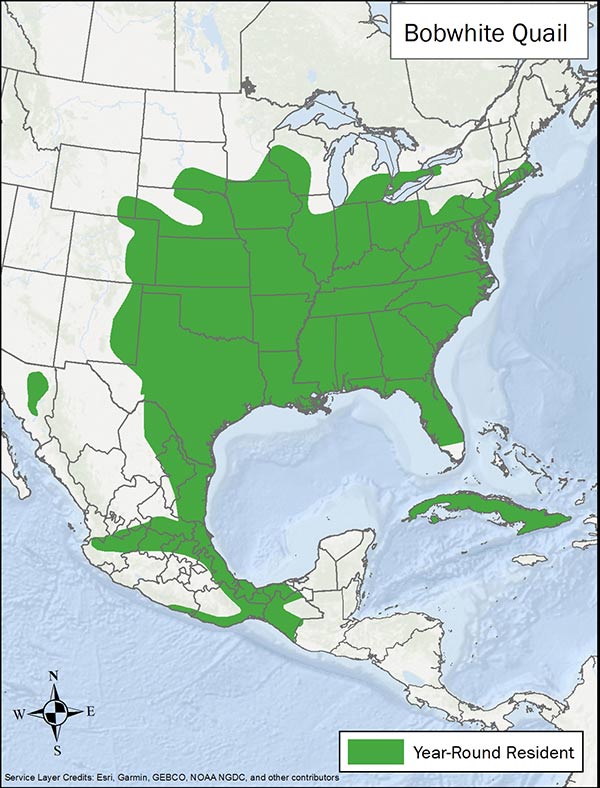 To promote bobwhite habitat, several management practices can be used to disturb soil and vegetation to promote early successional growth of plants and attract insects. Burning returns valuable nutrients to the soil and maintains open habitat in grasslands and woodlands while promoting new growth of grasses, forbs, and shrubs. Conduct prescribed burns on a 4-5-yr (2-3-yr in the southeast) cycle in late winter or early spring depending on the region. Leave unburned strips or plots for escape and nesting cover adjacent to burned areas. Targeted grazing can control succession in native pasture and rangelands. Mowing can also be used to maintain grassland communities in various stages of growth and vegetation diversity. However, grazing and burning are preferred because of the need for soil surface disturbance to release annual forbs and provide some bare ground.

Adjacent strips 10-20 ft/3-6 m wide and >100 ft/30 m long should be disked rotationally along woodlot, grassy field, and fence- and hedgerow edges. June disking will promote growth of vegetation and attract insects, but it should be done only in small areas to minimize impacts on nesting bobwhites and other ground nesting birds. Disking to a depth of 4-6 in/10-15 cm deep with 30-45% residual coverage is sufficient for vegetation regeneration.

Other species that may benefit from habitat management for northern bobwhite include wild turkey, deer, and blue grosbeaks.

BirdLife International and Handbook of the Birds of the World. 2019. Bird species distribution maps of the world. Version 2019.1. Northern Bobwhite

The Cornell Lab of Ornithology, Birds of the World. Northern Bobwhite.

Consult with local wildlife and range specialists to understand the best practices for your local condition.