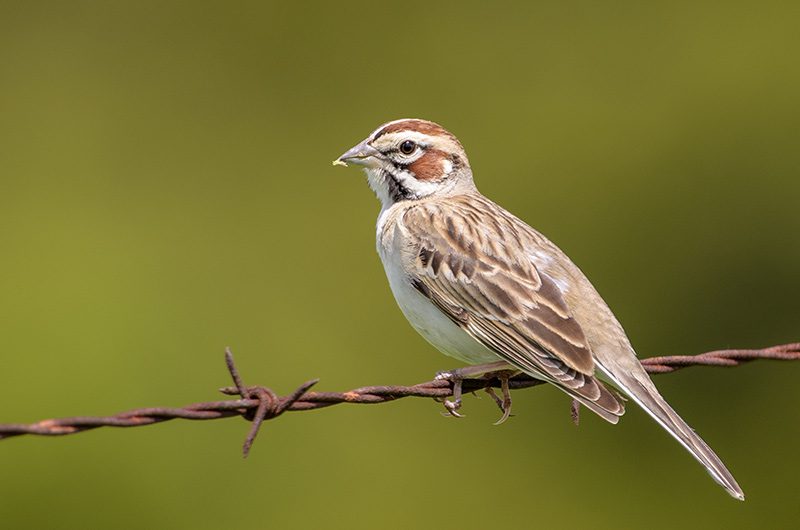 Courting male lark sparrows put on a dance that lasts for up to 5 minutes. The dance starts with the male hopping, then spreading his tail and drooping his wings so that they nearly touch the ground, almost like a turkey strutting.

The lark sparrow is the largest” open country” sparrow at 6.5 in/ 16 cm, about the size of a house sparrow. While it may be brown, its distinctive striped facial pattern and white tail spots stand out among sparrows. Lark sparrows also have plain whitish underparts with a dark spot on the center of the breast. Males sing a melodious jumble of churrs, buzzes, and trills.

Lark sparrow is a fairly widespread bird common to grasslands and shrubby edges in open country. Spring migration begins mid-March into much of the midwest, western, and northern parts of a few southern states. Fall migration occurs as early as mid-July but mostly into August. In the spring, their jumbly, buzzy song should alert you to their presence as they sing from conspicuous perches like wires and fence posts. They spend winter in Mexico but are year-round in Texas and parts of California. In the winter, when they are quieter, watch for this species’ white tail flashes. They forage on the ground, but when they are disturbed, they fly to bushes, perching on top instead of running along the ground like many other sparrows.

Courting male lark sparrows put on a dance that lasts for up to 5 minutes. The dance starts with the male hopping, then spreading his tail and drooping his wings so that they nearly touch the ground, almost like a turkey strutting.

Lark sparrows prefer a wide variety of open habitats or transition areas between habitats (called an ecotone) with medium to heavy herbaceous grass/herbaceous ground cover (40-100%) and scattered trees or shrubs. Lark sparrows are found in orchards or other open or parklike woodlands, grasslands and savanna, shrub-steppe, mesquite grasslands, and fallow fields with brushy edges. Suitable habitat needs a shrub component, at least 10% cover. They show an affinity to shrub-steppe, such as sagebrush, greasewood, and mesquite near grasslands with shrubs at least 3-6 ft/1-2 m tall. Nests may be on the ground or in a shrub. They will often perch on shrubs and fenceposts. 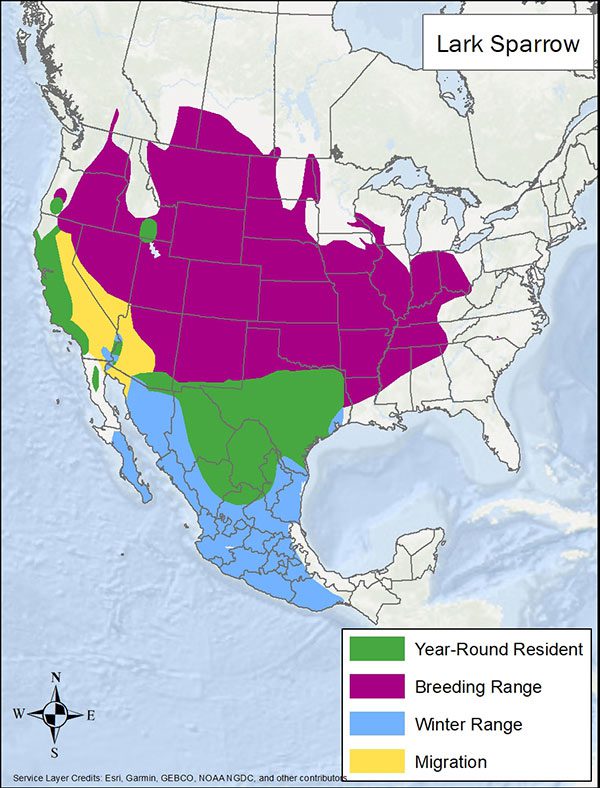 Maintain intact native shrub communities. Lark sparrows are compatible with light to moderate grazing pressure as they prefer areas with low amounts of litter. Maintain some edge habitat within grasslands and shrublands.

Avoid habitat destruction and fragmentation from development and conversion of native shrub-steppe and grasslands. Avoid burning that removes shrubs. Lark sparrow will use burned areas when shrubs remain intact.

Other wildlife that may benefit from habitat management for lark sparrow includes greater sage grouse, sage thrasher, and Brewer’s sparrow.

BirdLife International and Handbook of the Birds of the World. 2019. Bird species distribution maps of the world.  Version 2019.1. Lark sparrow

The Cornell Lab of Ornithology. Birds of the World (Lark sparrow).

The Cornell Lab of Ornithology. All About Birds (Lark sparrow).