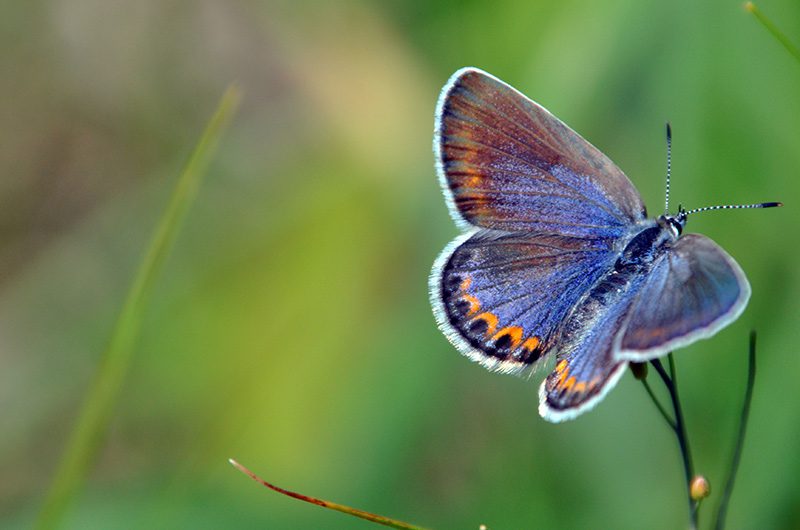 Karner blue butterflies are small, with a wingspan of approximately 1 in/2.5 cm. Male and female Karner blues have slightly different appearances. Both sexes have wings with gray undersides, with edges lined by orange crescents on both forewing and hindwing. The inner portion of the underside has scattered black spots encircled in white. The topside of the male wing is silvery blue with black margins, while the female’s wings are a dark blue to brown. The female’s topside has irregular bands of orange crescents.

Karner blue butterflies are found from Minnesota to Maine, with Wisconsin and Michigan having the most remaining populations. This butterfly is federally listed as an Endangered Species in the United States and has most likely been extirpated from Canada. 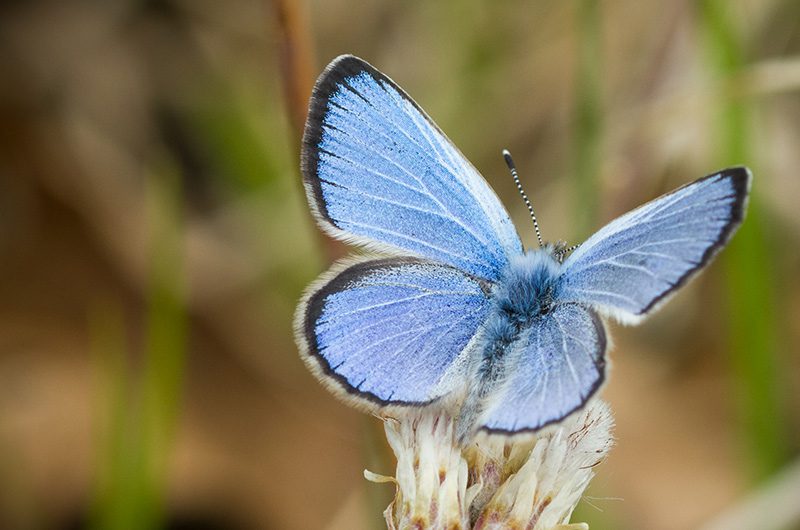 Karner blue butterflies have two broods per season, the first reaching its adult flight stage in late May, lasting until late June. The second brood adults can be observed from mid-July to late August. They are often observed near patches of wild lupine (their larval food plant) and can be seen feeding on nectar from a variety of flowers.

Karner blue butterflies prefer a balance of open and closed canopy habitats. Adults feed on nectar from a wide variety of flowers, while the larva has only one known food source, wild lupine. Wild lupine thrives best in sandy soils in oak savannas and barren sandy areas. Karner blue butterflies use a variety of native flowering plants that provide nectar, including beebalm, cinquefoil, blackberry, leadplant, milkweeds, gayfeather, and black-eyed Susans. 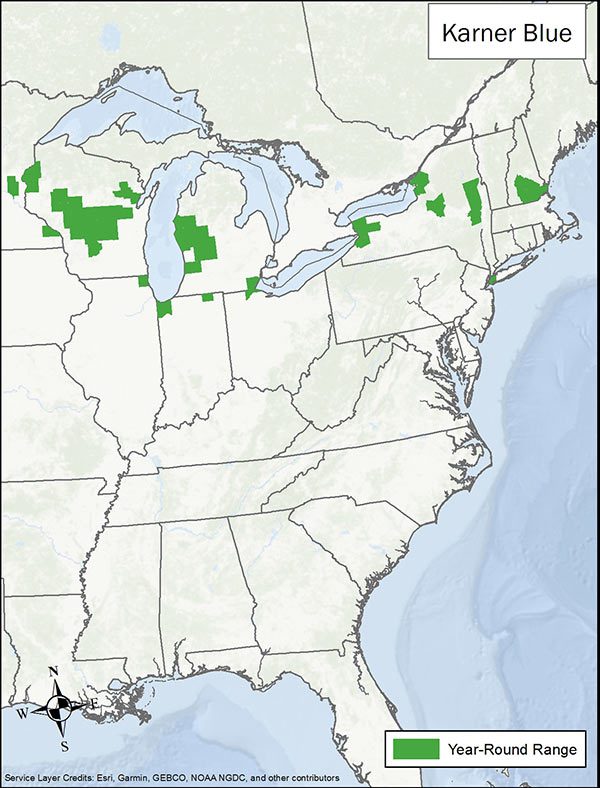 Management that increases the connectivity between fragmented habitats and expands wild lupine density and distribution will benefit the Karner blue butterfly. Prescribed fire and direct planting in open-canopy habitats can promote the growth and expansion of lupines. As Karner blue butterflies prefer areas with open and closed canopies, thinning of oak forest and pine removal to encourage savannas can be beneficial near occupied butterfly habitats. Activities that maintain rotational grazing within oak forests will benefit Karner blue nectar plants and potentially lupines.

Avoid allowing oak savannas to become dense stands of oak as this may exclude nectar plants and lupines. Avoid broadleaf herbicides in or near Karner blue butterfly habitat to provide areas for lupines and nectar-producing flowering plants. Avoid extensive use of off-road vehicles within or near the occupied habitat

Management that promotes the Karner blue’s preferred habitat also often benefits other rare species such as the frosted elfin butterfly, phlox moth, persius duskywing, prairie fameflower, and the western slender glass lizard. Conservation of Karner blue habitat and wild blue lupine is likely to benefit many other plants and pollinators that also thrive in these rare habitats.

US Forest Service. 2021. Pollinator of the Month. Karner Blue Butterfly.