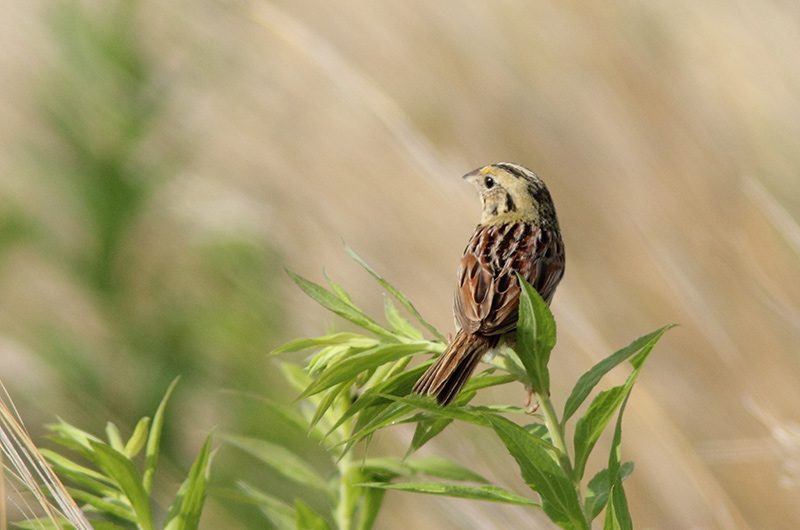 The Henslow’s sparrow has the simplest and shortest song of any North American songbird, a thin tze-lick insect-like song, accurately described as a “feeble hiccup.”

Henslow’s sparrow is a small grassland bird at 5 in/13 cm long, about the size of a house sparrow. They have a large, flat-topped head with a large, heavy bill and short, pointed tail; dark overall, with olive-green to buffy-olive on the head; narrowly streaked with blackish across buffy breast and flanks, the remainder of underparts whitish.

Migration begins in early March, with the main part of migration in April. The start of fall migration is not well understood. Singing tends to dwindle by September, thus it is assumed to be migrating. They are secretive by nature and don’t flush in the open easily. They often prefer to run under grass or weedy cover and, if flushed, only then fly a short zigzag course before abruptly dropping into the grass again. Most easily seen when the male sings from exposed perches in fields during the breeding season. Henslow’s sparrow is often difficult to detect because it sings from inconspicuous perches on low forbs, shrubs, or grasses. Even when singing, it is easy to overlook this sparrow’s dry, thin, short call.

The Henslow’s sparrow has the simplest and shortest song of any North American songbird, a thin tze-lick insect-like song, accurately described as a “feeble hiccup.”

Once common on the tallgrass prairies of the Midwest and wet grasslands of eastern North America, the Henslow’s sparrow is a remarkably inconspicuous grassland bird. It prefers habitats with tall( 2-4 ft/0.6-1.2 m), dense vegetation, and thick litter (<2% bare ground), with few shrubs or trees (<5%). The similar grasshopper sparrow (Ammodramus savannarum) and widespread savannah sparrow (Passerculus sandwichensis) usually select drier sites with shorter and less dense vegetation. Although individual territories are small, 0.45-2.0 ac/0.18-1.0 ha, grassland patch size is an important component of Henslow’s sparrow habitat. Henslow’s sparrows are more likely to be encountered, and densities may be higher, in large grassland areas, 75-135 ac/30-55 ha, than in small areas. Henslow’s sparrow may occupy agricultural land such as a hayfield and idle pasture lands as long as vegetation is dense and tall with abundant litter. 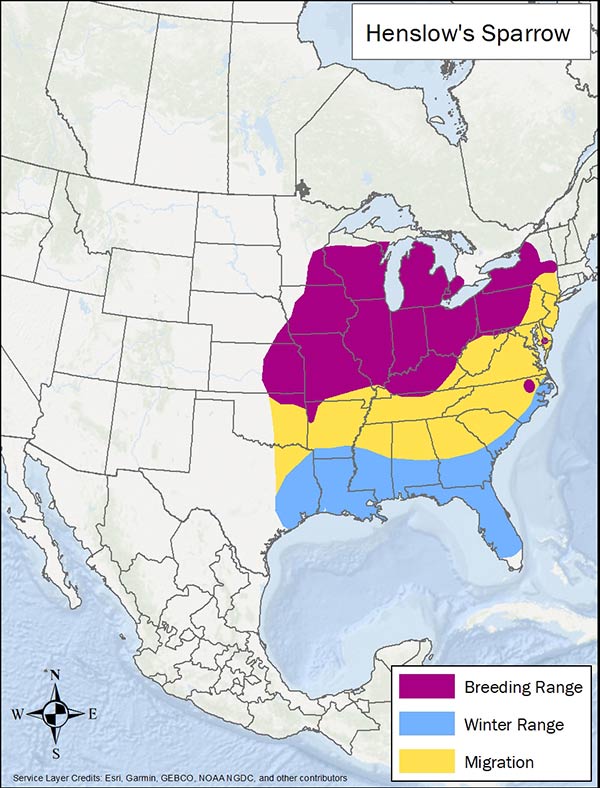 Maintain intact grassland patches at least 75 ac/30 ha in size. Light to moderate stock density grazing can be beneficial to maintaining overall habitat for Henslow’s sparrow.  Ensure that some areas have grasses at least 12 in/30 cm tall in the spring for nesting sparrows. Reduce encroaching shrub and tree cover through the use of fire every 2-4 years.  By leaving at least 2 years between burns, litter buildup is adequate for Henslow’s sparrow habitat.

Avoid conversion of native tallgrass prairie and wet grasslands to cropland and residential development. Avoid annual burning as this will eliminate litter accumulation. Avoid mowing until after nesting when possible (late-July).

Other wildlife that may benefit from habitat management for Henlow’s sparrow include LeConte’s sparrow and Northern harrier.

BirdLife International and Handbook of the Birds of the World. 2019. Bird species distribution maps of the world.  Version 2019.1. Henslow’s Sparrow.

The Cornell Lab of Ornithology. Birds of the World (Henslow’s Sparrow).

The Cornell Lab of Ornithology. All About Birds (Henslow’s Sparrow).