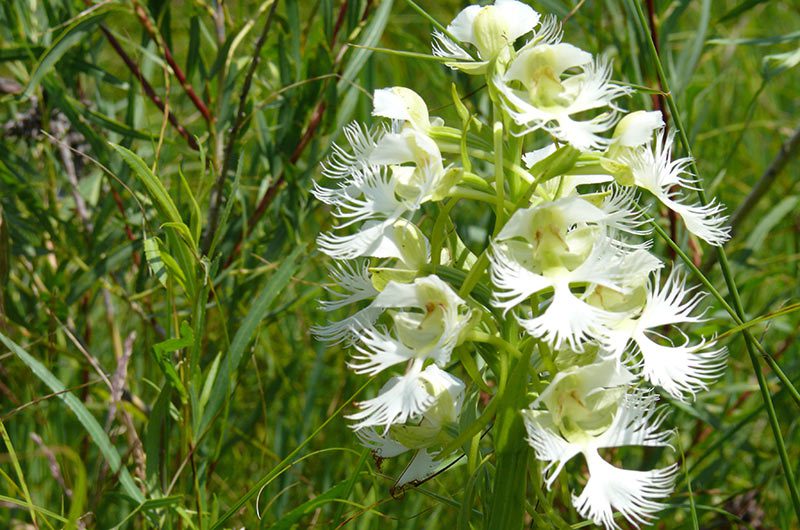 The Great Plains white fringed orchid flowers produce a fragrant scent from the evening and into the night to attract pollinators. The species is pollinated exclusively by sphinx moths or hawk moths, whose proboscis length matches the length of the nectar spur of the orchid flower.

The Great Plains white fringed orchid, also known as western prairie fringed orchid, is a rare wildflower up to 47 in/120 cm tall and has a single upright stem that grows in the spring. Flowering spikes have up to 24 white to creamy white flowers in clusters on each flowering stalk. The flowers have an upper lip shaped like a hood and a lower lip divided into three parts, with a fringed margin. The three-part fringed lip is generally less than 1 in/2.5 cm long, and each flower’s nectar spur (tube-like structure) is 1-2 in/3-6 cm long.

The Great Plains white fringed orchid was much more common historically. It is currently listed as Threatened in the United States and Endangered in Canada.

The Great Plains white fringed orchid flowers produce a fragrant scent from the evening and into the night to attract pollinators. The species is pollinated exclusively by sphinx moths or hawk moths, whose proboscis length matches the length of the nectar spur of the orchid flower.

Great Plains white fringed orchids are almost exclusively found in wet to mesic native tallgrass prairies and meadows with few, if any trees. These sites may be flooded for 1-2 weeks annually.  Most sites are undisturbed and occur in full sun on moist calcareous till (glacial deposits) or sandy soils with pH 5.4-7.6. A few populations are found in moderately disturbed grasslands or roadside ditches. Seed germination and seedling development require soil mycorrhizal fungi for proper water uptake and nutrition. 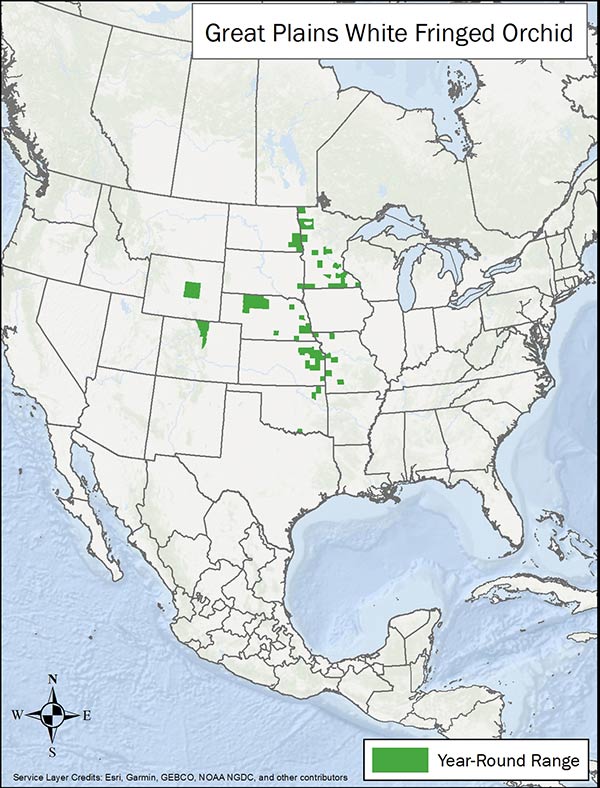 Range Map provided by US Department of Ag, PLANTS Database and is restricted to the US portion of the habitat.

Since many of the Great Plains white fringed orchid populations occur on private land, landowners have an important role to play in the survival of the species. Maintain high-quality, intact, native tallgrass prairie to conserve the mycorrhizal fungi and highly specific pollinators that form complex relationships with the orchids. Where habitat is degraded, restoration actions should be taken. Weed control for competing species including purple loosestrife and controlling woody species invading prairies will benefit fringed orchids.

Cool-season prescribed fire can be beneficial if well timed and targets non-native and/or invasive species, which compete with the orchids for habitat. Use of prescribed fire should be limited to before orchid stems have emerged (late March/early April), as fire can damage growing tips > 2 in/5 cm above ground, and after the orchids have seeded in the fall. Assistance in seed dispersal on private or public land with good habitat can also help in reestablishing the species.

Avoid conversion of native prairie to cropland or alteration of the natural hydrology in occupied Great Plains white fringed orchid areas. Avoid heavy grazing during the summer until after seed formation on sites with fringed orchids, as cattle can directly graze the orchid and trample the sensitive habitat. Avoid use of insecticides that may kill sphinx months and lead to reduced probability of orchid pollination. Avoid haying before orchid seed dispersal. Avoid orchid collecting.

Other species that may benefit from habitat management for Great Plains white fringed orchids are its pollinators – hawk moths and sphinx moths, as well as other native wildflowers and wildlife that rely on native mesic tallgrass prairie.