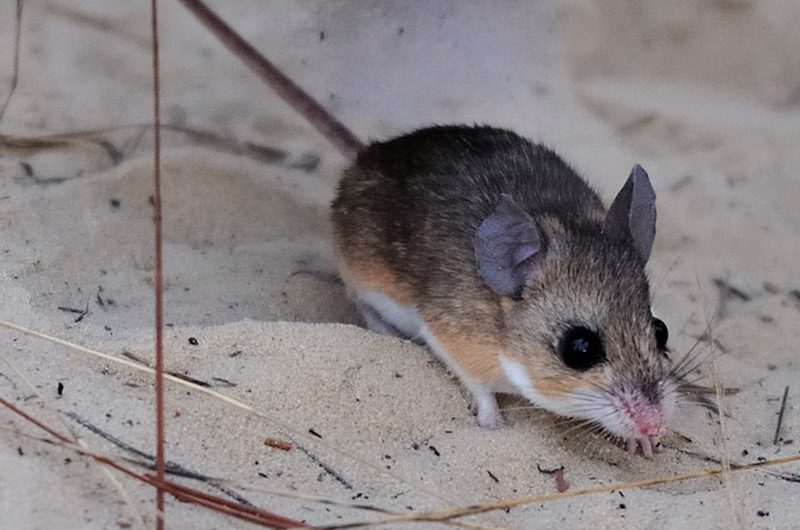 While the Florida mouse commonly occupies the same burrows as its predators, including snakes, it avoids predation by digging a different entrance and creating side tunnels.

The Florida mouse lives exclusively in the state of Florida. It is found from coast to coast mainly in the north central region of the state. Their predators include snakes, owls, and birds of prey. They likely breed throughout the year, but more commonly from fall to early winter. The mouse will reproduce no more than two litters each year. Each litter usually consists of two to three offspring.

The Florida mouse is dependent on gopher tortoise burrows for shelter. They are nocturnal and emerge at night to forage on a diet of seeds, acorns, fruits, and insects. During the day they remain inactive in these burrows.

While the Florida mouse commonly occupies the same burrows as its predators, including snakes, it avoids predation by digging a different entrance and creating side tunnels.

The Florida mouse prefers xeric upland communities with dry, well-drained sandy soils, such as scrub (including scrubby flatwoods, oak scrub, sand pine scrub, rosemary scrub) and sandhills. Vegetation is sparse shrubs (10-60%) and ground cover and patches of bare ground with trees being <25%. Historically, this habitat structure was maintained by natural fire every 4-10 years. Florida mice excavate their burrows inside the burrows of animals, often the gopher tortoise. They will also use burrows of armadillos or other mice. 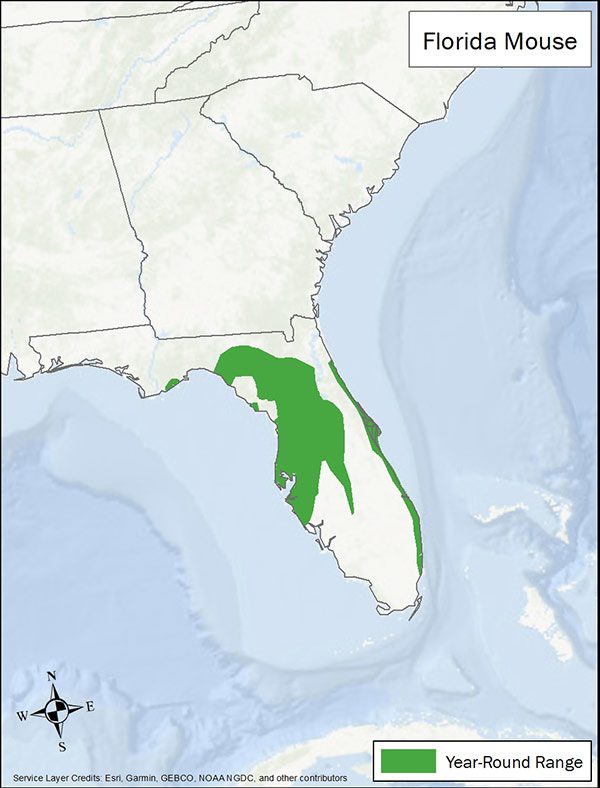 Avoid large-scale development and agricultural conversion as it isolates mouse populations and destroys habitat. The removal of oak trees is another threat to the Florida Mouse and other endemic species. Oak trees and other seed-bearing plants play a significant role in their habitat as a food source through mast reproduction of seeds. Avoid conducting prescribed fire in the fall during peak breeding season as the removal of cover impacts available food resources and increases predation risk. Additionally, the increase in native (i.e. racoons) and nonnative predators (i.e. cats, red fire ants) can threaten mouse populations.

Other species that benefit from high-quality natural xeric uplands include the Florida scrub-jay, gopher tortoise, red-cockaded woodpecker, and the eastern indigo snake.