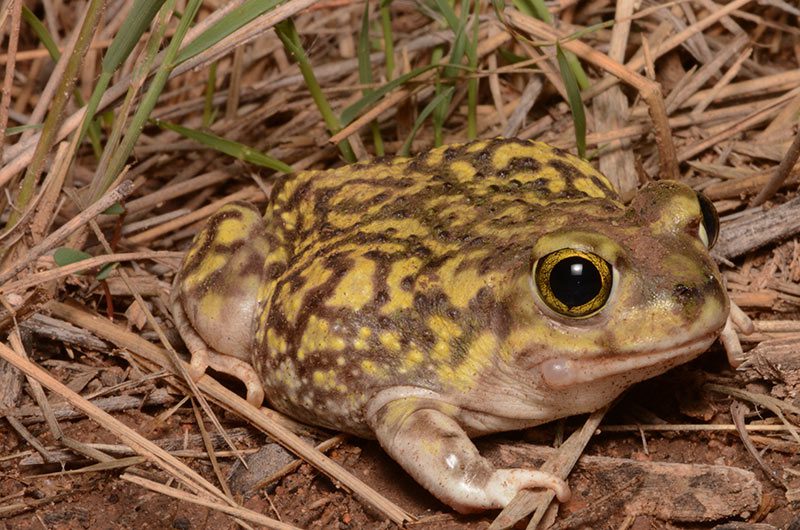 The Couch’s spadefoot is a toad that is about 3 in/7.6 cm in length.  This spadefoot toad has smooth skin that can be greenish, greenish-yellow, brownish-yellowish, or olive with irregular blotches or spots of black, brown, or dark green. The belly is white or dirty white and does not have any markings. The base of each rear foot is dark with sickle-shaped spades made from keratin, which is why they are called spadefoot. The Couch’s spadefoot has large eyes compared to its size. The tadpoles are brown to black bodies with a brassy iridescent appearance.

Couch’s spadefoot is found in the southwest United States south into Mexico. Spadefoot toads are hard to see, as they spend 9-10 months underground to avoid heat and desiccation. The Couch’s spadefoot emerges to mate during the summer when monsoon rains create temporary ponds. The males begin calling to attract nearby females once temporary ponds appear. Their calls are said to sound like the bleating of sheep or goats. One female can lay as many as 3000 eggs, which hatch in 15 hours, and land-dwelling toadlets are active in 1-2 weeks. 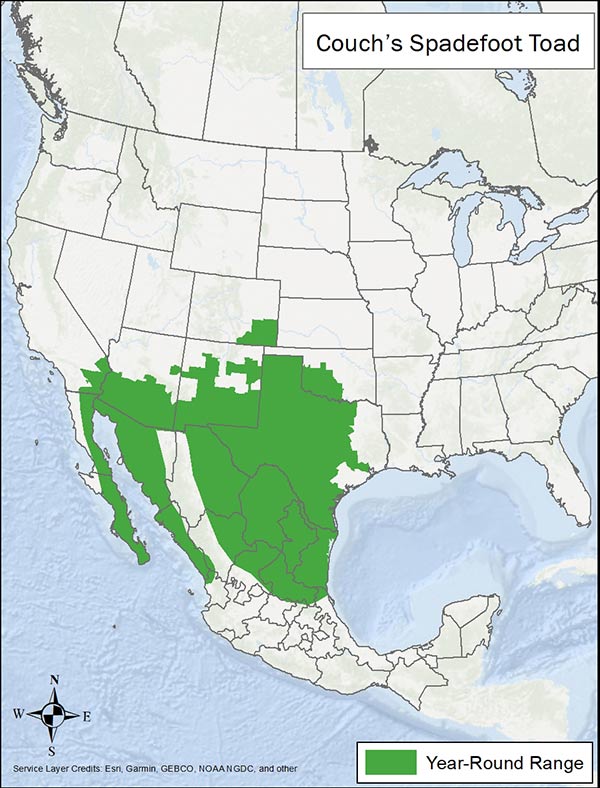 Maintain intact arid and semi-arid grasslands, shrublands, and woodlands with ephemeral ponds and depressions that fill with water for several weeks following monsoons.

Avoid destruction of temporary ponds and surrounding native vegetation through residential development and construction of roads.  Avoid other activities that reduce the number and size of ponds available for spadefoot toads for breeding. Since they rely on insects for food, avoid using insecticides near ponds to ensure that the spadefoot has adequate food.

The insects (beetles, grasshoppers, katydids, ants, spiders, and termites) that the spadefoot feeds on, as well as other species that are dependent on temporary ponds will benefit from habitat management for Couch’s spadefoot toad.