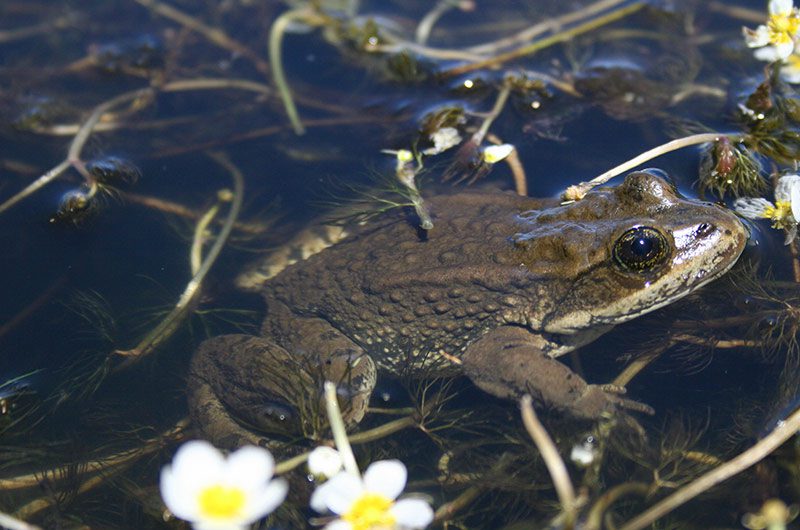 Until recently, it was thought that the Columbia spotted frog hibernated during the winter under mud. However, researchers have found that frogs are active through the winter under the ice.

Columbia spotted frogs are found in the Pacific Northwest and Rocky Mountains with declining populations in the Great Basin. Adult Columbia spotted frogs are often a dark brown, olive green, or gray color. Their backs, legs, and sides have dark spots that typically have light centers. The frogs have a light-colored stripe above their upper lip. The undersides of the legs are bright red, salmon, or orange color with the color sometimes extending up to the chin or replaced by light mottled gray on chin, chest and/or belly.

The body length is typically 2-4 in/5-10 cm long. Females usually weigh more and have a brighter-colored underside. Tadpoles are a dark green color with golden spots on the top and an iridescent, silver or bronze-colored underside.

Columbia spotted frogs are most active in the summer, in both the day and night. They often are found basking in the sun along streams, lakes, or ponds from April until September. The frogs breed from April to early June, depending on temperature and elevation. In September or October, the frogs start migrating to wintering sites. They can also be identified by their eggs, which are laid on the surface of quiet or stagnant water in groups 150 to 500. While they are often found with leopard frogs and wood frogs, spotted frogs have smooth skin and white bellies.

Until recently, it was thought that the Columbia spotted frog hibernated during the winter under mud. However, researchers have found that these frogs are active through the winter under the ice.

From early spring to early fall, the Columbia spotted frog requires permanent quiet bodies of water such as stream margins, lakes, ponds, marshes, and springs. They prefer areas exposed to sunlight with lots of herbaceous vegetation (>60% cover) stabilizing the streambanks. Typically, they can be found in a range of surrounding habitats including forests, grasslands, and shrublands.

They use warm, shallow (<10% slope) and slow or stagnant water to breed and deposit their eggs. During this time, they will forage in seasonally moist areas such as wet meadows, within 985 ft/300m, or in permanent bodies of water. The frogs’ winter habitat requires sites that are permanent water bodies that do not completely freeze and are well-oxygenated, such as ponds, streams, springs, deep lakes, and beaver ponds. They sometimes breed and spend the summer at the same site used for wintering. 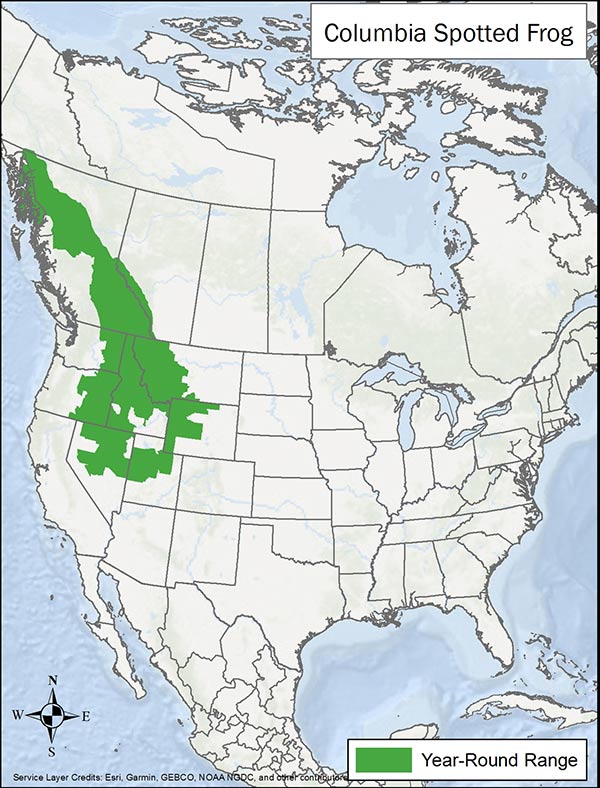 The Columbia spotted frog is vulnerable to habitat degradation and invasive predators. Maintaining permanent water sources, such as springs, streams, and ponds in their natural state, will benefit the frog’s habitat and the water system. For example, when possible, maintain ponds with shallow waters and abundant bankside vegetation and emergent plants and minimize fertilizer and pesticide use in areas that runoff into the waterbody.

When grazing in the area, reduce the direct impacts to springs and shallow wetlands. Restrict wetland and riparian vegetation trampling by fencing livestock out of springs and high-quality wetlands and creating livestock watering points. Maintaining vegetation around ponds and streams also stabilizes the streambank and benefits water quality for frogs and livestock.

Avoid the introduction of non-native fish and frogs, including bullfrogs. Bullfrogs and other non-native predators can have significant impacts on isolated Columbia spotted frog populations. Avoid projects that significantly manipulate or divert the water source or directly impact high-quality habitat.