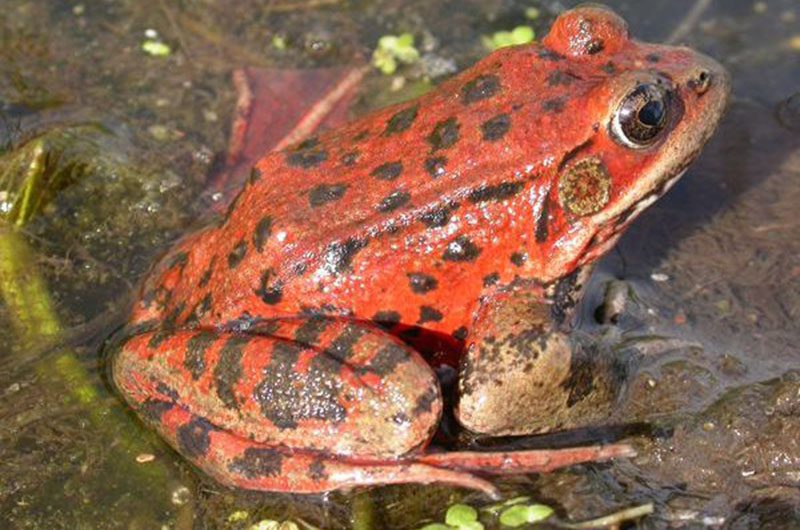 California red-legged frogs are the largest native frog in the western United States, growing up to 5 in/13 cm. This frog may appear brown, gray, olive, red or orange, often with black flecks and larger dark blotches. The back has two prominent ridges from the eyes to the hip. In adults, the lower abdomen and hind legs are often red or pink. The California red-legged frog has large, webbed back feet. A cream, white or orange stripe usually extends along the upper lip from beneath the eye to the end of the jaw. The belly of adult frogs is white usually with patches of bright red or orange. Red-legged frog is listed as Threatened throughout its range in California.

California red-legged frogs are primarily found in coastal drainages of central California to northern Baja California, Mexico. Their range is reduced in the Central Valley, Sierra Nevada foothills, and southern California. Not much is known about the red-legged frog in Mexico. Breeding is probably the easiest time to find these brightly colored frogs. California red-legged frogs breed shortly after large rainfall events in late winter and early spring, primarily in February. Frogs usually move at night from riparian and upland habitats to the breeding ponds. Breeding happens in November through early April in ponds, wetlands and other breeding areas.  Females attach egg masses to emergent vegetation so that the masses float on the surface of the water.

California red-legged frogs live in and near sheltered permanent or seasonal ponds, marshes, springs, quiet stream pools and lakes. Optimum breeding habitat is an area with deep pools and dense, shrubby riparian or emergent vegetation such as overhanging willows and cattails (>60% herbaceous cover and >24in/61 cm tall). Breeding areas are found within a matrix of riparian areas and rangelands, woodlands, or forests.  Red-legged frogs spend summer in small mammal burrows, leaf litter and other moist areas in and near riparian areas and wetlands. Adult frogs eat terrestrial and aquatic invertebrates and small vertebrates including Pacific chorus frogs and California mice. 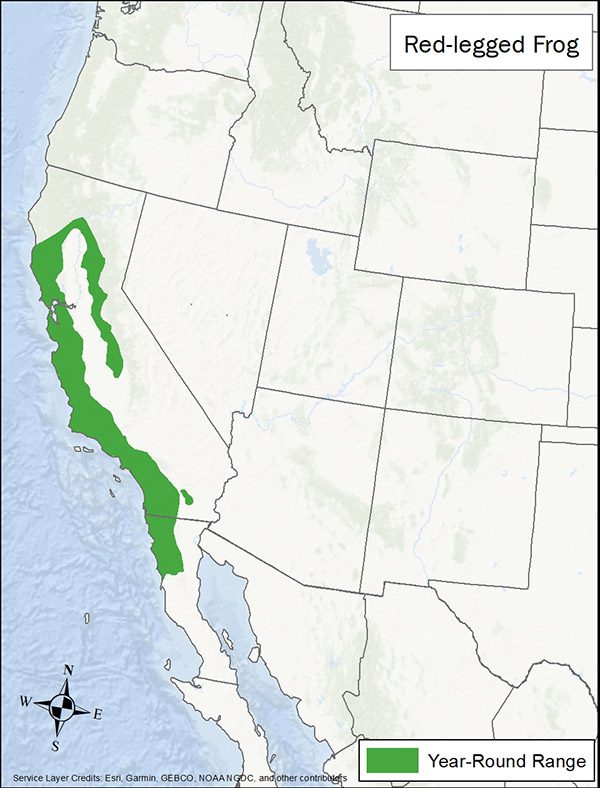 Maintain natural wetlands, springs, and streams including dense bank vegetation. Provide livestock watering away from ponds, wetlands and streams.  Fence riparian areas and wetlands so that livestock grazing can be managed. Ensure that streambank vegetation is dense and tall. If you are interested in restoring red-legged frogs to your property, contact your local wildlife agency to see if your land is suitable.

Management for California red-legged frog will benefit other wetland species including their prey: Pacific chorus frogs and California mice