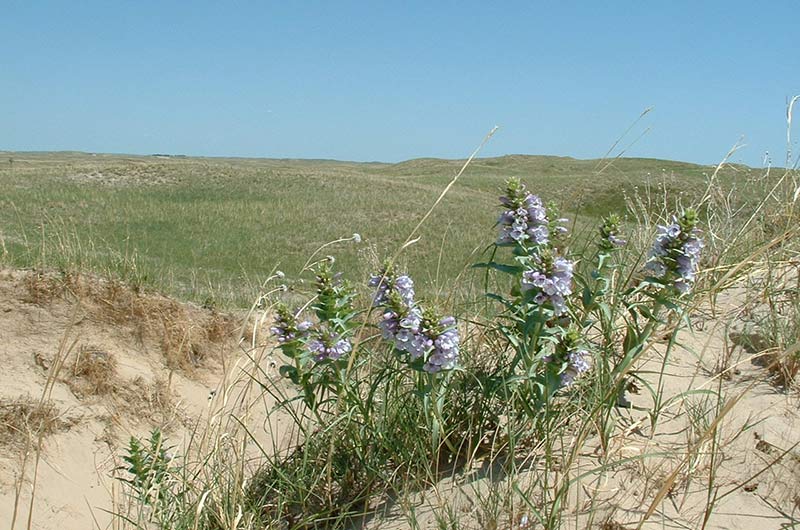 The blowout penstemon is only found in a small area of Nebraska and Wyoming where significant active sand dunes are found. Blowout penstemon has fragrant flowers, which is unusual for penstemons.

The blowout penstemon, or Hayden’s penstemon, is a perennial plant that grows on prairie sandhills. The plant is 1-2 ft/0.3-0.6 m tall with one or many stems. The flowering stems have waxy, greenish-blue leaves that curve upwards with 6-10 groups of light blue or pale lavender tubular flowers. Blowout penstemon flowers from May to early July, fruits from mid-June to mid-July, and releases seeds from late August to September. Each fruit has about 25-35 seeds, and each plant can release up to 1,500 seeds. However, not every plant blooms every year. The plant is pollinated primarily by bees, but it can also be pollinated by wasps, ants, butterflies, beetles, and flies. Currently, the only known populations of blowout penstemon, a federally listed Endangered species, occur in the Nebraska sandhills and south-central Wyoming.

The blowout penstemon is found in sparse clusters on active blowouts, crater-like depressions caused by wind erosion, and within choppy sand dunes. Population sizes range from 25 to over 2,000 plants. They are found on steep, northwest-facing slopes in blowouts, often on sparsely vegetated dunes. Some other plants that might grow in the same habitat are the lemon scurfpea and blowout grass.

The blowout penstemon is only found in a small area of Nebraska and Wyoming where significant active sand dunes are found. Blowout penstemon has fragrant flowers, which is unusual for penstemons.

The blowout penstemon is restricted to choppy sand dunes and sand blowout habitats. It grows in active blowouts, areas of wind-blown sand movement. Blowouts require actively shifting and eroding sand and are often sparsely vegetated. They are found in areas with 25-40% vegetative cover. As more plants colonize the sandhill, it becomes harder for the penstemon to compete, and the penstemon will usually be gradually eliminated. 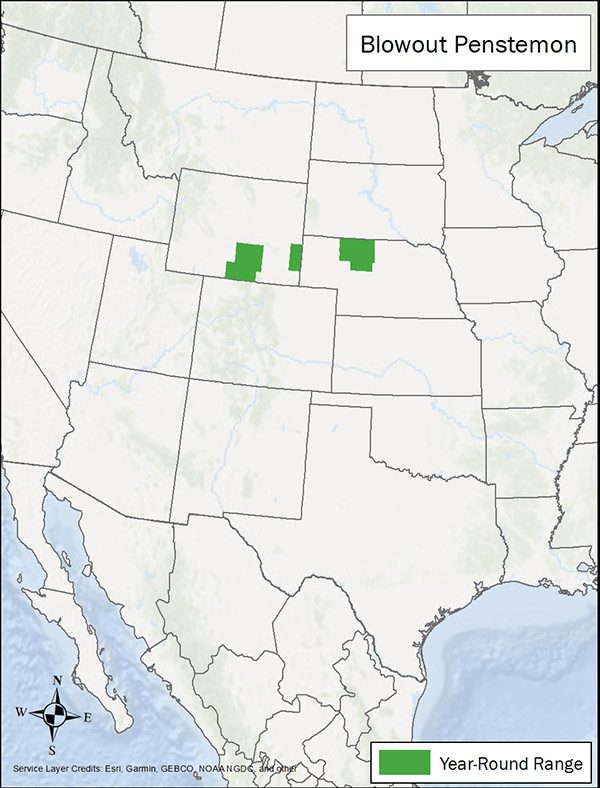 Kangaroo rat, bee pollinators, and other species that occur in sand blowout habitat will benefit from management for blowout penstemon.