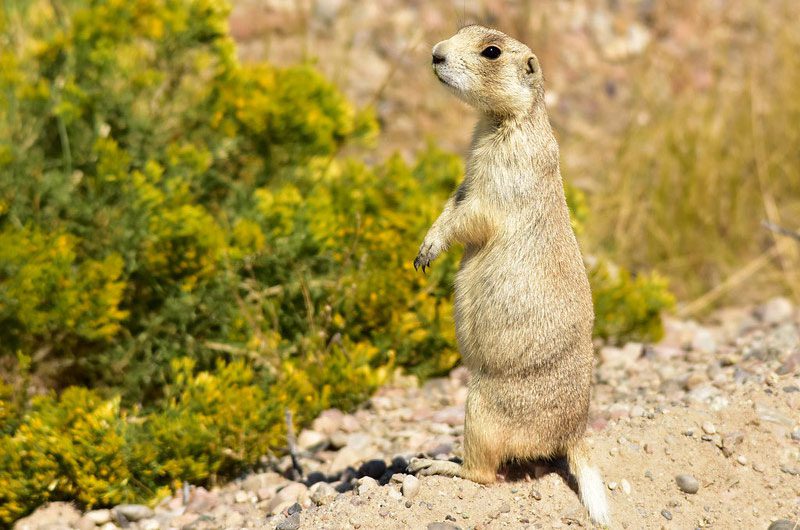 White-tailed prairie dogs prefer eating forbs over grasses. This behavior may increase the availability of forage grasses preferred by other species, including livestock.

After sunrise, white-tailed prairie dogs emerge from their underground burrows, foraging or sitting upright near their burrow entrance. In the summer, prairie dogs will return to their burrows at midday to avoid the heat and resurface when it cools down. They remain aboveground all day in the spring and fall, with activity peaking in the early afternoon. They hibernate underground in winter, starting as early as August. The first to emerge do so in February, regardless of the weather. Young are born in burrows in spring and emerge in late May or June. Peak colony activity is in May, June, and early July.

White-tailed prairie dogs prefer eating forbs over grasses. This behavior may increase the availability of forage grasses preferred by other species, including livestock.

White-tailed prairie dogs are commonly found in sagebrush steppe, open shrublands, shortgrass prairie, semidesert grasslands, and open valleys. Herbaceous cover is highly variable but generally between 15-75%. Unlike other prairie dog species, white-tailed prairie dogs can inhabit a variety of habitats and areas with more diverse shrub cover, including shrub-steppe, prairie, meadow, and transitional areas with mixed shrubs and grasses and slopes <15%. Since they do not actively clip grasses short to see predators like other prairie dogs, they rely on shrubs for protection from predators. Colonies are typically found in areas with soil texture that is sandy loam, loam, sandy clay loam (30-50% sand) with small stones to allow for structural stability of burrows. 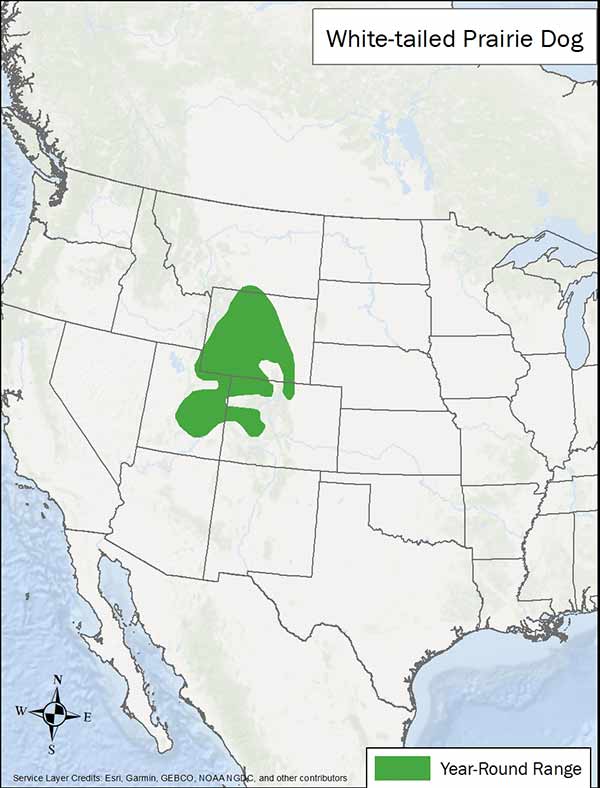 If possible, private landowners should allow white-tailed prairie dogs on a portion of their land to provide habitat for species dependent upon prairie dog colonies. Collaborating with public land managers can help maintain prairie dog populations while minimizing negative impacts and human-wildlife conflicts. It’s more effective to discourage prairie dogs from colonizing a new area than eliminating an established colony. Colony expansion can be discouraged by adding visual barriers such as tall, dense vegetation around the area to obstruct their view. If colony control is necessary, an adaptive management approach that meets goals without eliminating the entire colony or harming other species is recommended.

Black-footed ferrets, which rely on prairie dogs as food, are being reintroduced in many areas. Contact your local wildlife agency if you are interested in allowing the reintroduction of black-footed ferrets. In addition, consider vaccinating prairie dogs against plague or dusting colonies with deltamethrin to control flea populations that carry plague to ensure ferrets have a reliable food source. Federal incentives exist for white-tailed prairie dog colonies on private land.

Avoid eradicating entire colonies. Sylvatic plague can kill more than 85% of prairie dogs in a colony, however white-tailed prairie dog colonies can experience moderate recovery within two years. This recovery may be because colonies are less dense and more isolated compared to other prairie dog species. Similarly, habitat destruction through conversion to cropland, residential development, oil and gas, and water development can further restrict colony size and isolate colonies. Intensive control can result in significant declines or even eradication of smaller, more isolated populations.