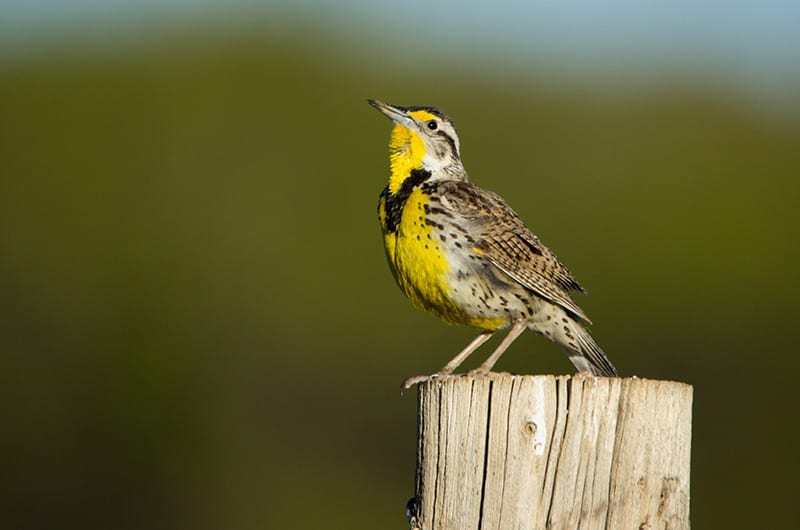 In 1914, California grain growers initiated a study on the Western Meadowlark’s diet to determine if the bird could be designated a pest species. Although they do eat grain, Western Meadowlarks help limit crop-damaging insects.

Western meadowlarks are a medium-sized bird (7.5 – 9.5 inches) with a long slender bill and short tail. They are black and brown on the back and wings, have a yellow throat, breast and belly with a black “V” on the breast; it is gray in the winter. They migrate south from mid-October to mid-November. In the southern part of their range, some will overwinter. They are an abundant grassland bird occurring from the Great Plains to the Pacific Coast.

In the spring and summer, males can often be seen singing atop fence posts, shrubs, powerlines and other high points. In winter, Western Meadowlarks are often seen in small, loose flocks foraging on the ground in stubble fields and other farmlands1.

In 1914, California grain growers initiated a study on the Western Meadowlark’s diet to determine if the bird could be designated a pest species. Although they do eat grain, Western Meadowlarks help limit crop-damaging insects.

Western Meadowlarks live in open grasslands, prairies, meadows, and some agricultural fields ranging from sea level to 10,000 feet (OFWO). They avoid wooded edges and areas with heavy shrubs. Their optimal breeding habitat is lightly grazed pastures or fallow fields with grass heights of 1-2 feet (0.3-0.6 meters) and shrub or tree cover less than 10 percent. Western Meadowlarks nest in late April through early July (Altman 1999). In winter they forage for seeds on nearly bare ground, in contrast to the Eastern Meadowlark, which tends to feed in more vegetated areas. They show a distinctly seasonal dietary pattern, foraging for grain during winter and early spring, and for weed seeds in the fall2. 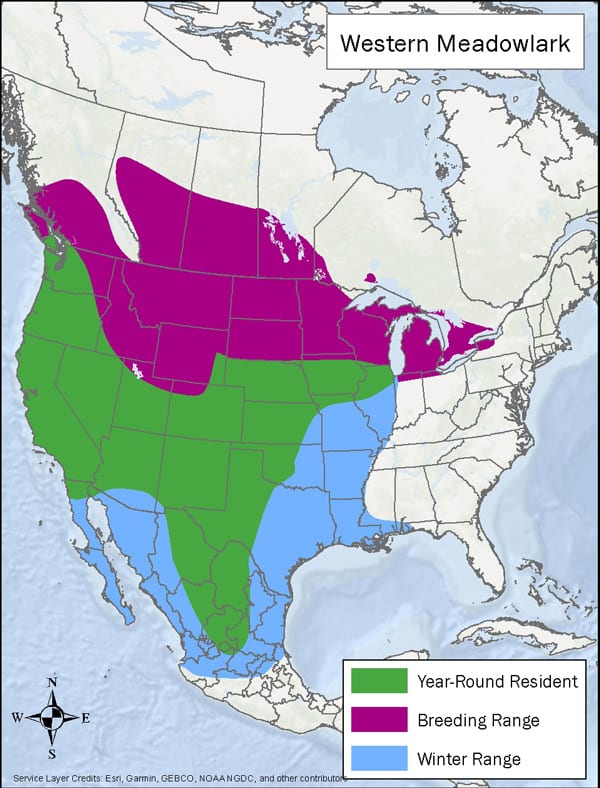 Western Meadowlarks are extremely sensitive to human disturbance during the breeding season and will abort
nesting attempts if they are flushed while incubating eggs3. Other factors affecting Western Meadowlark
populations may include pesticide uses, habitat degradation due to invasive plant species, and fire suppression that alters native grasslands.